Symbols of the seasons

If we look at the zodiac circle, we can see that each of the seasons either starts or ends with a sign representing a large animal: 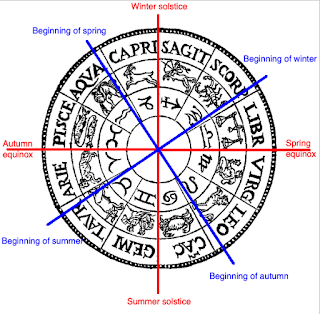 Spring ends with Aries (ram). In my post "Ram and Bull" I explained that the ram symbol marks the end of the lambing season of the wild Eurasian sheep in Europe. 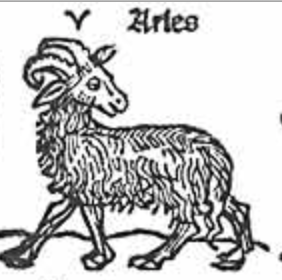 Summer starts in Taurus (bull). In my post "Ram and Bull" I explained that the bull symbol marks the beginning of the calving season of the wild Eurasian cattle in Europe. 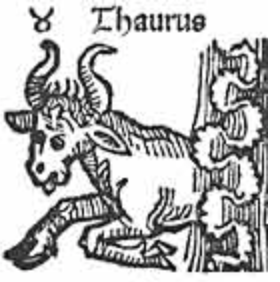 Autumn starts in Leo (lion). In my post "Entemena vase" I postulated that this symbol marked the beginning of the mating season of the Eurasian lions in Europe. 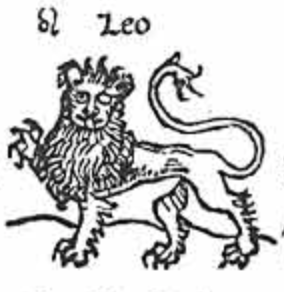 Winter ends in Capricorn (goat). In my post "Goat" I explained that the goat symbol marked the beginning of the mating season of the wild European Alpine ibex goat. 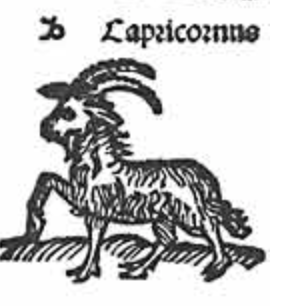 So these four animals are symbols of the four seasons 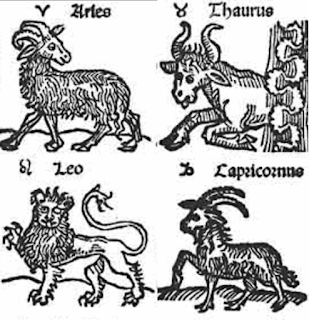 I wonder if this is the reason why the Achaemenids made their rhytons, ceremonial drinking, libation vessels, with the heads of these 4 animals? 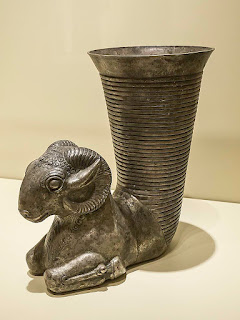 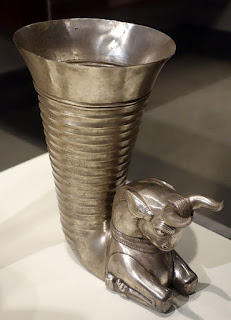 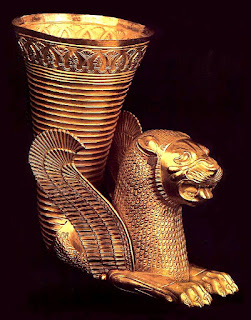 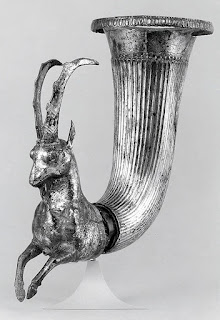 Now interestingly, three out of four of these animals are large wild Eurasian herbivores. There is one more large wild Eurasian herbivore, a deer. Is it possible that it somehow fits into this picture? Well it is. August, the beginning of autumn is the time when Persian fallow deer and European red deer start their mating season. Is this why we also find Achaemenids rhytons, ceremonial drinking, libation vessels with the heads of stags? Or is stag equivalent of the bull, considering that stag is linked with summer solstice and that we find "lion killing stag" scene equivalent to "lion killing bull" scene? I am not sure about this one... 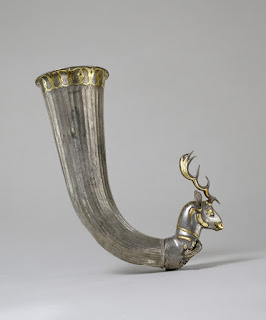 Interestingly, the same types of rhyta, with the same animal heads, were made in Levant during the second half of the second millennium BC.

This is a late Bronze Age ivory plaque from Megiddo (Israel) ca. 1200 BC. The ruler, seated on an imposing throne, drinks wine being served from a large krater behind him, using lion and goat headed horns (rhyta)

"...Egyptian armies which reguralrly invaded Retenu or Canaan during LBA, made certain that they brought back animal-headed rhyta and drinking horns as tribute. Two lion-headed examples in silver are depicted on the frescoes inside the Theban tomb of Amenmose, a commander of the infantry under Tuthmosis III and his son Amenothep II. Tuthmosis III raided levant 14 times over the 54 year period of his reign. The records say that "wine flowed like water" and that "have been drunk...every day as if at feast in Egypt". The pharaoh's annals also record that bull-headed, ram-headed and lion-headed vessels were taken as booty. They are said to have been made in Retenu..." From "Ancient Wine: The Search for the Origins of Viniculture" by Patrick E. McGovern
Posted by oldeuropeanculture at 13:35