There is a strange object that could be seen on Mesopotamian stelas, cylinder seals and reliefs. It is held by a god or goddess and in a lot of cases is being offered to a king who is standing, often making a sacrifice, or otherwise showing respect. The symbol dates from the Neo-Sumerian Empire (c. 22nd to 21st century BC) to the Neo-Assyrian Empire (c. 911 and 609 BC). 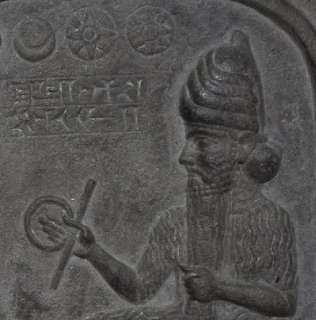 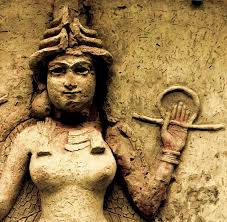 This object is commonly known as "Rod and Ring" symbol and is explained as depiction of  a measuring string and a yardstick.

The myth of Inanna's descent to the nether world describes how the goddess dresses and prepares herself: "She held the lapis-lazuli measuring rod and measuring line in her hand..."


The actual reason why gods and goddesses would hold such things as measuring rod and measuring line and why kings would be so grateful to receive such mundane objects is a mystery.

So here is my proposal what this all means:

I believe that Sumerian mysterious symbol "measuring rod and measuring line" was the precursor of the "square and compasses" and it has exactly the same meaning.

In my post "Square and compasses" I talked about thy symbolism of these two measuring tools. 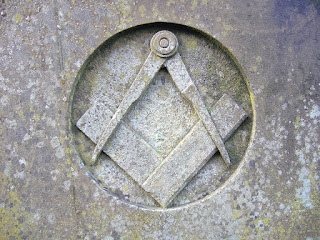 I explained how ancient Hebrews saw the universe as a stone built structure with the stone flat Earth as the base and the stone Heavenly dome as the roof. 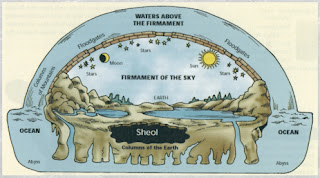 This is a doodle that got me into trouble when I was in primary school. Father (top) and Mother (bottom) in an act of creating life :) 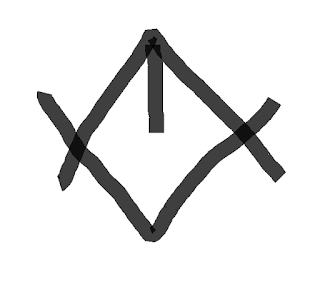 Looks familiar? Well it should be. It is the above Square (Mother Earth) and Compasses (Father Sky) image again...


And Sumerians saw the sky as Father God An and Earth as Mother Goddess Ki. They believed that An (Sky Father) and Ki (Earth mother) mated and produced basically everything there is including all life.

Sumerians also believed that both sky dome and flat earth were built out of stone. Basically the world to them looked like this 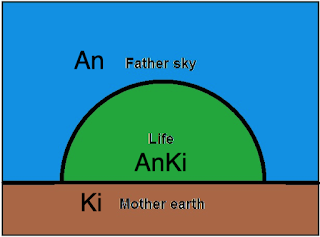 Ok but what about measuring rod and measuring line?

You take the measuring line, tie it to the central pole and then walk around the pole. As you walk you mark a circle with the centre in the pole. This predates compasses. Also, you can't use compasses to draw large arches or circles. You have to use measuring line.

I talked about this in my post "Boaz and Jachin".

So the original symbol of a mason was indeed a measuring rod and measuring line. 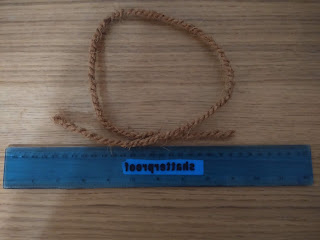 There is actually Serbian saying "Pomoću štapa i kanapa" (Using stick and rope) meaning "in the old primitive way"...

Here is what the measuring rod and line would have looked like separate and being held together: 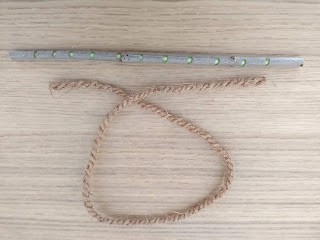 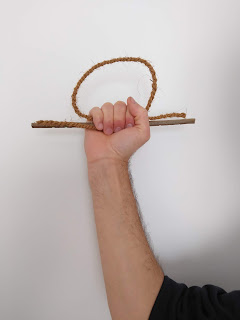 These two objects represent Heaven (Sky) and Earth. Sky Father and Earth mother. They represent the power of Sky and Earth to create and destroy life.

And the reason why gods were giving these tools to the kings is to remind them of their duty to build ziggurats...

I believe that building ziggurats was one of the main duties of kings in Mesopotamia.

This is Ziggurat of An from Uruk. 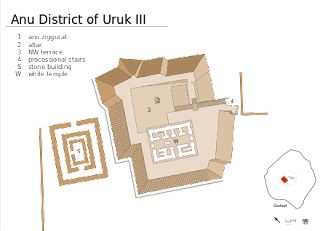 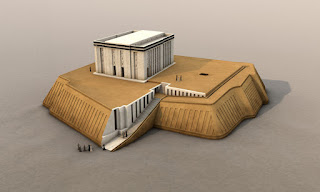 Built during 4th millennium BC it was 21 meters tall. Sometime at the end of the 4th millennium BC, the massive White Temple was built atop of the ziggurat. The Stone Temple was built of limestone and bitumen on a podium of rammed earth and plastered with lime mortar. The podium itself was built over a woven reed mat called "giparu", a word which originally referred a reed mat used ritually as a nuptial bed but took on the meaning as the source of abundance which radiated upward into the structure...

Sumerians believed that the rain was Sky God's semen and that when it fell down it fertilised the Mother Earth, who then gave birth to food.

No holly loving, no munching...

And to Sumerians living during the second half of the the 3rd millennium, it must have seemed like Sky God have completely lost interest in Mother Earth.

The third millennium BC was time of catastrophic weather events which caused chaos across early Bronze Age civilisations. Droughts and floods devastated many areas around the world. The worst of those weather events was the so called "4.2 kiloyear event".

The 4.2-kiloyear BP aridification event was one of the most severe climatic events of the Holocene epoch. It defines the beginning of the current Meghalayan age in the Holocene epoch. Starting in about 2200 BC, it probably lasted the entire 22nd century BC. It has been hypothesised to have caused the collapse of the Old Kingdom in Egypt as well as the Akkadian Empire in Mesopotamia, and the Liangzhu culture in the lower Yangtze River area. The drought may also have initiated the collapse of the Indus Valley Civilisation, with some of its population moving southeastward to follow the movement of their desired habitat, as well as the migration of Indo-European speaking people into India. The below map shows global distribution of the 4.2 kiloyear event. The hatched areas were affected by wet conditions or flooding, and the dotted areas by drought or dust storms. 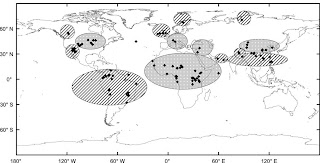 In Mesopotamia this weather event had horrendous effects. By 2100 BC, drought, soil erosion and salt buildup have devastated agriculture. One Sumerian wrote that the "earth turned white."

The Sky God seemed to have lost interest in Mother Earth and his people. The result was hunger, abandonment of cities and eventual civilisation collapse and fall under the foreign rule.

Archaeological evidence documents widespread abandonment of the agricultural plains of northern Mesopotamia and dramatic influxes of refugees into southern Mesopotamia, around 2170 BC. A 180-km-long wall, the "Repeller of the Amorites," was built across central Mesopotamia to stem nomadic incursions to the south. Around 2150 BC, the Gutian people, who originally inhabited the Zagros Mountains, defeated the demoralised Akkadian army, took Akkad, and destroyed it around 2115 BC....

Lament for the Destruction of Ur, ancient Sumerian composition bewailing the collapse of the 3rd Dynasty of Ur (c. 2112 – c. 2004 BC) in southern Mesopotamia. The lament, primarily composed of 11 "songs" or stanzas of unequal length, begins by enumerating some of the prominent cities and temples of Sumer and the deities who had deserted them. In the second “song,” the people of Ur and of other cities of Sumer are urged to set up a bitter lament. The third “song” relates that the goddess Ningal hears the pleas of the people of Ur, but she is not able to dissuade the gods Anu and Enlil from their decision to destroy the city, and the remaining “songs” relate the devastating results of Ur’s defeat in battle.

At some stage, probably during this period, the white temple at the top of the ziggurat of An in Uruk was ritually destroyed and covered with alternating layers of clay and stone, then excavated and filled with mortar sometime later.

Is it because the god to whom it was dedicated abandoned his people and people in return abandoned their god?

The next great ziggurat to be built, the greatest ziggurat of them all, was dedicated to Marduk (Basically the same old Sky Father An under a different name). Its name was Etemenanki and this ziggurat was very interesting indeed.

This is Etemenanki a ziggurat built in the ancient city of Babylon. Originally 91 meters in height, it now exists only in ruins.

A number of scholars have suggested that this ziggurat had one purpose: to hold a shrine where the scene of the sacred marriage, the central rite of the great new year festival was performed every year. Herodotus describes the furnishing of the shrine on top of the ziggurat at Babylon and says it contained a great golden couch on which a woman spent the night alone. Well not alone. Having sex with Marduk, Sky. Or possibly a priest pretending to be Marduk. Which is ok, because the woman was pretending to be Ki, Earth. The holly marriage, the marriage between Sky (Heaven) and Earth, between Sky Father and Earth Mother had to be consummated, or there would be no food, no life...

It is unclear when the temple of Sky-Earth was built, but it is accepted that it might have already existed in the 2nd millennium BC.

Was it built even earlier?

I would say that it was built probably at the end of the 3rd millennium BC, right during the great drought (c. 22nd to 21st century BC) and right about the time when we see the first depictions of the "measuring rod and measuring line" being given to the kings by gods.

Believe or not, archaeologists are still debating the reason why Sumerians built ziggurats. To me it is pretty clear that the purpose of ziggurats was to bring the earth closer to the sky in order to help Father sky to consummate his marriage with Mother Earth.

They were dedicated to Sky Gods in a way that people hoped Sky Gods would visit the ziggurat tops, take the offerings left there and do their duty (spill their semen on the Mother Earth).

That this was the purpose of the ziggurats can be seen from the name of the daddy of all ziggurats: Etemen An Ki (Sumerian É.TEMEN.AN.KI 𒂍𒀭𒆠 "temple of the foundation (support) of heaven and earth")

I left the best bit for the end:

Historians believe that building of Etemen An Ki possibly inspired the biblical story of the building of the Tower of Babel.

In Hebrew and Christian tradition, the Tower of Babel was built by legendary king Nimrod, the "mighty hunter before god" who ruled over the cities of Babel, Erech, Akkad, and perhaps Calneh, in Shinar.

Since Accad (Babylonian Akkad) was destroyed and lost with the destruction of its Empire in the period 2200–2154 BCE (during the 4.2 kiloyear event), the stories mentioning Nimrod seem to recall the period just before the collapse of the Akkadian empire. The association with Erech (Babylonian Uruk), a city that lost its prime importance around 2,000 BCE as a result of above mention catastrophic weather event and subsequent struggles between Isin, Larsa and Elam, also attests the early provenance of the stories of Nimrod.

Jewish and Christian legends say that Nimrod built the tower of Babel to show that he is as great as God (The Great Mason, Great Architect). This apparently pissed god off a lot...

But I believe that Etemen An Ki was built so high "as to touch the sky" in a desperate attempt to "bring Mother Earth as close to Father Sky as possible" so that he might decide to lay with her again and pour his semen (rain) on the parched Mother Earth.

Interestingly it is the building of the Tower of Babel which is said to have been the first project done by Masons whose symbol is Square and Compasses...Or should we say Measuring rod and Measuring line...And Nimrod is regarded as the first Mason...

Nimrod figures in some very early versions of the history of Freemasonry, where he was said to have been one of the fraternity's founders. According to the Encyclopedia of Freemasonry: "The legend of the Craft in the Old Constitutions refers to Nimrod as one of the founders of Masonry"...

Lets have a look at Hammurabi stela again: 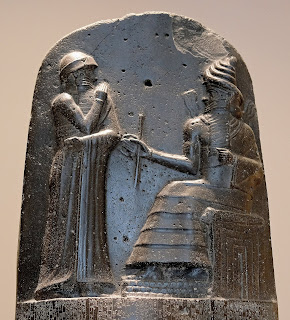 The description of the scene is: Hammurabi (standing), depicted as receiving his royal insignia from Shamash (or possibly Marduk)...

What Hammurabi is receiving from Marduk is measuring rod and measuring line. This is very interesting. So by 19th century BC, the symbols of the Great Mason, Great Architect became "royal insignia"!

What the Sky God is saying to the king is: here are the Mason tools. Use them to build a temple to me. The high place where I will mate with Earth Goddess. Build it and you will rule, in my name...The symbol basically represented covenant with Sky God...

This is all very interesting. Don't you think?