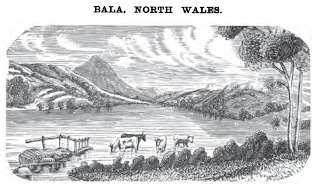 Llyn Tegid also known in English as Bala Lake, is a lake in Gwynedd, Wales. The name Tegid may be related to Welsh teg, meaning "fair". It is the largest natural body of water in Wales. The name Bala could actually be older than the Welsh name. It could be derived from Proto-Indo-European "*bale-" (bog, marsh).

Germanic
English "pool"
(Same in all other Germanic languages)

Thought to be derivable from Proto-Indo-European "*bʰelH-" meaning white...

So it is possible that Bala also just means lake, pond, swamp...

Why am I talking about this? Because of a very interesting legend about the lake Bala in Wales.

Once upon a time, where Bala (Llyn Tegid) lies today was the old town of Bala. Tegid Foel, who was very cruel prince, lived in a palace in the town. Despite numerous warnings that vengeance would come for his cruelty, he still didn’t change his ways. When his first grandson was born, the prince held a banquet to mark the occasion and he invited all of his friends and acquaintances who were all equally as cruel. Along with the food and the drink, the prince had hired the best harpist in the country to entertain them. During the feast, the harpist heard a voice saying “Vengeance will come!” When he looked over his shoulder he saw a little bird, which enticed him out of the palace and up to the hills where he fell asleep. Upon waking in the morning, the harpist saw that the old town of Bala had been drowned, and he found his harp floating on the lake. The lake was named after the cruel prince, and it’s said that boatmen, can hear at times, a feeble voice saying “Vengeance will come, vengeance will come” and another voice enquiring “When will it come?” The first voice replies “In the third generation”.

The reason why this legend is so interesting is that we find the same legend in two places one in Croatia and one in Serbia.

In Senj area of Croatia, there is a legend about Miloševo jezero (Miloš's lake) which is located under Krinja hill.

Where the lake is once stood Širingrad city and the castle of king Gavan. Because of Gavan's evil deeds, the castle was swallowed by the earth and in its place a lake appeared. In this lake, the legend says, St George killed  a dragon. People say that until recently you could still see Gavan's castle at the bottom of the lake. The lake was also home to bulls with six horns, which used to come out of the lake and fight with bulls belonging to the people living in the area. Some shepherds swear that they have seen these bulls with their own eyes...

Here is the original in Croatian: 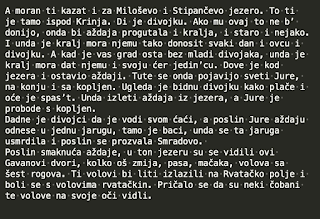 In Serbia there is a story recorded in a mid 19th century dictionary about king Gavan or Gaban.

King Gavan was a mighty king who ruled somewhere above Danube. His wife's name was Gabanka, Gavanka. He had a great city and was very powerful. But he was also a very greedy and mean. One day angels fell from the sky and destroyed the King Gavan's castle and it sank into the lake Balaton (Originally just Balato meaning lake, pond, swamp). 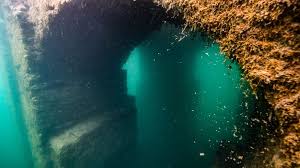 King Gavan was punished to be eternally bitten by snakes.

There used to be a fresco in the old Tronosha (tripod) monastery in Serbia depicting an old man naked covered in snakes which were biting his nipples. A local legend says that the man depicted on the fresco was king Gaban.

Now this is really interesting. We have the same story about evil greedy king whose town was submerged by a lake called Bala (Balaton) because of his sins. But we also have something even more interesting: the name of the evil greedy mean king from Balkan legends literally means "greedy" in Gaelic, Irish (Celtic)...

Lebor Gabála Érenn (The Book of the Taking of Ireland) is the Middle Irish title of a loose collection of poems and prose narratives recounting the mythical origins and history of the Irish from the creation of the world down to the Middle Ages. An important record of the folkloric history of Ireland, it was compiled and edited by an anonymous scholar in the 11th century, and might be described as a mélange of mythology, legend, history, folklore and Christian historiography. It is usually known in English as The Book of Invasions or The Book of Conquests, and in Modern Irish as Leabhar Gabhála Éireann or Leabhar Gabhála na hÉireann.

The word Gabala from "Lebor Gabála Érenn" comes from the Irish root word gabh (old Irish gab) which means to take, to capture, to seize.

So king Gabhan could be the mean greedy king who only takes and never gives. If we look at "foclóir gaedhilge agus béarla by Patrick Dineen" we find these words which are derived from this root:


As far as I can recall from history books, Celts were last seen in the Balkans in 3rd century BC...Many many centuries before current local Slavic population arrived from somewhere in Poland...

How come then the mean greedy always grabbing king from this stories is called Gaban (Gavan)? Coincidence?

One of old towns in Neretva valey in Bosnia is called Gabela. Gabela means custom, tax, taking and also a customs house. Gabella in Catalan, Italian, French means tax, taking given to a prince. But if you look at the etymology of these word you will see that they all come from Arabic قبالة (qabāla, “bail, guaranty”), which makes no sense at all. I believe that this word also comes from Gaelic, Irish (Celtic) gabh - to take, to capture, to seize, which is what tax literally is, a portion of what you have which you have to give to a greedy mean prince or king or...