5-7,000 years ago, someone could have told you what these symbols represented, but not today. Today, no one is really sure about the culture that produced this and other pieces, even though it was one of civilization's 4 cradles. Still, this piece and the others make quite an impression even today. 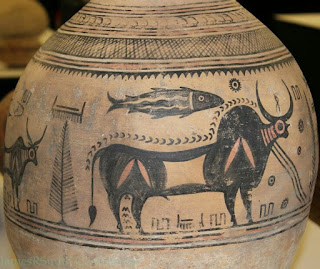 Let me see if I can decipher this image...

The main fish species fished in Indus River is "palla". 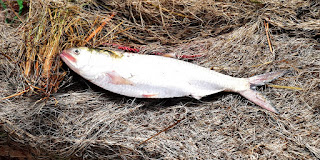 Palla is a migratory fish, very much like salmon. In migrates into and out of Indus River during the monsoon season which in Indus Valley lasts between Jun and September.

This is why fishing for palla on Indus River is a seasonal activity. Fishermen usually catch palla during the four-month season, which starts in May and ends in August. This is also the main fishing season in general.

Now what does the above picture mean then?

Considering how important fishing was for the people of the Indus Valley civilisation, which we know from all the fish bones found in their settlements, they would have wanted to somehow mark this season. I believe that this picture marks the main fishing season on the Indus River.

A while back, in my post "Fishes" I talked about the fact that the Zodiac symbol Pisces (Fishes) marks the main Salmon fishing season in Continental Europe.

In those two and several other posts I postulated that Zodiac signs were symbols marking extremely important natural events on the Solar vegetative circle (solar year) and that they predate the Actual star constellations. I believe that one of these old natural zodiac symbols, Bull, is used on this picture in its old original meaning: Summer. And interestingly summer coincides with the fishing season on Indus River...

So here is what I think the above picture means: 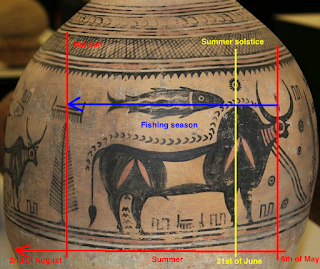 1. The bull symbolises summer months, between the 6th of May, the beginning of summer in Taurus, to the 2nd of August.
2. The bull's hump represents the summer solstice, 21st of June. This is symbolised by the sun placed above it(???). Maybe it is just a symbol of summer, like the other sun symbols around the bull's head...
3. The shower like symbol above the tree represents air water, monsoon, which peaks in the middle of August.
4. The same symbol can also be seen below the bull between the two "wave" symbols which all together represents ground water, river.
5. The tree represents the revival of vegetation which monsoon brings.
6. Between the beginning of summer (May) and the end of summer (August) is the main palla fishing season on Indus River

I have no idea what the other things on the picture mean. For instance I would love to know what the 35 "moons" along the bull's back mean...Ben Johanson since commented on Facebook that: "Palla reaches sexual maturity between 1-2 years and lives between 2-4 years. 35 moons is between 2 and 3 years which would be when the mature fish would come back to the river to spawn..."

So what do you think?
Posted by oldeuropeanculture at 13:20 5 comments: