In my post about bullaun stones, the ancient grinding stones, I mentioned that these types of stones are also found in the South Eastern Baltic are. This is one of many old hollowed stones from the Baltic. They are called bowl stones and are, like in Ireland and in Slavic countries, regarded as sacred. The place where the stone is located is used as a place of worship. The diameter of this stone is about 60 cm and a depth - about 15 cm. In the past people considered the accumulated water as sacred and thought that it had healing properties. In the past the stone used to be called the stone of god.

You can see many more of these stones if you run this search. Here are some of them. This one is called "Lielais Daviņu Akmens" which means great stone of giving, offering, great altar. It seems that the stone was linked to harvest rituals. 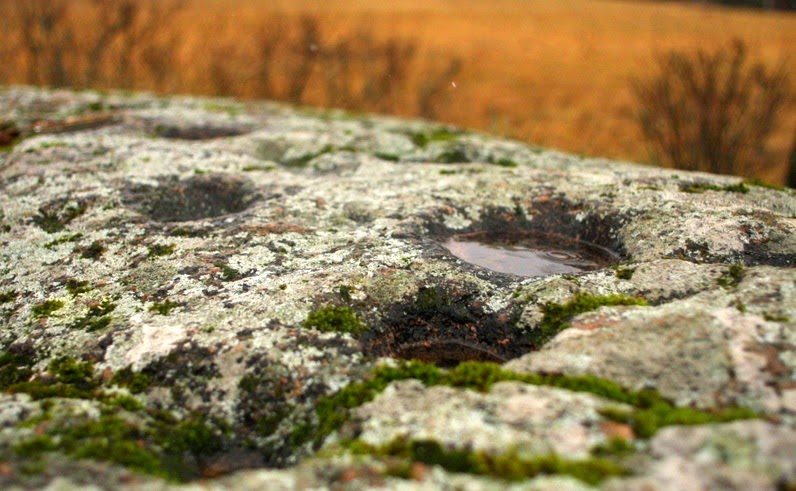 This stone stands on a hill, where an old oak forest grew until the seventeenth century. The hill was a site of a pagan temple. 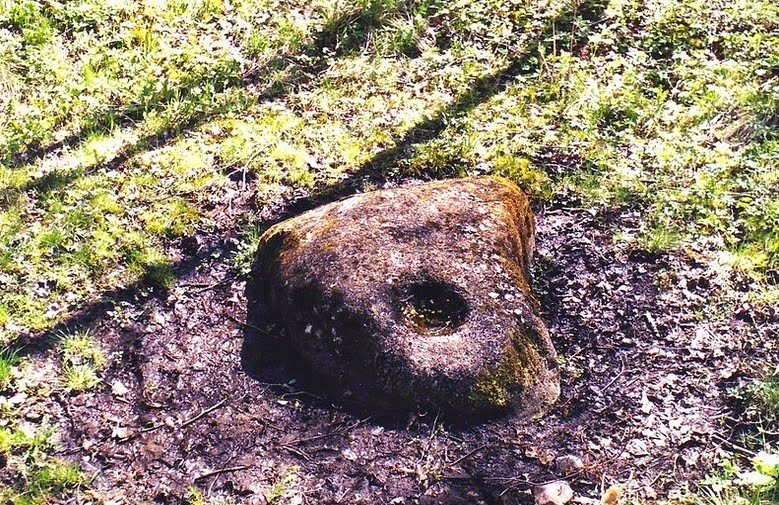 For information about these stones in English look at the pages 27 - 33 of the book "Studies into the Balts’ Sacred Places".

I was just made aware of an article about an interesting half-made bowl-stone from Baltic region. On its top part there's a circular groove of a similar size as the usual bowls on other stones, as if someone had intended to gouge out a bowl there too but stopped half way through the process of gouging the hole. 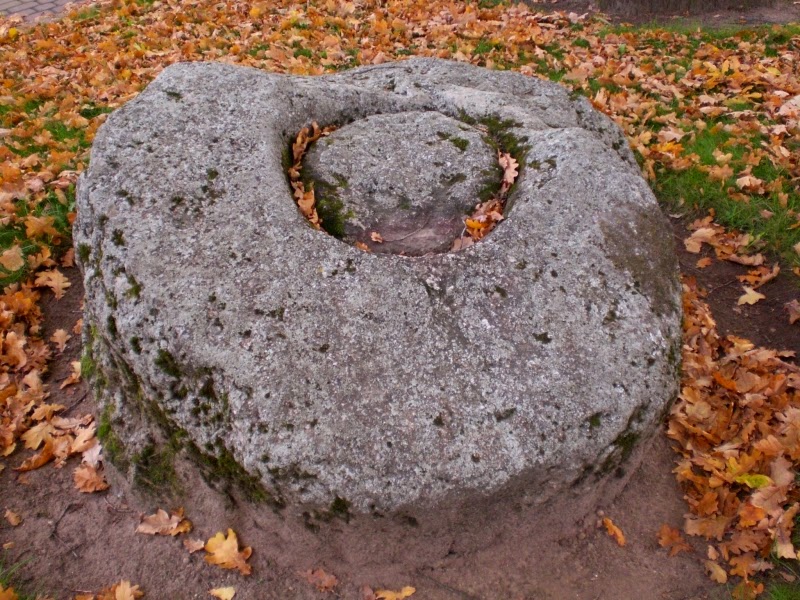 We can deduce though that this is how these bowl stones were actually made from their name in Lithuanian. Lithuanian word for bowl is dubuo, dubeni akameni...These words come from Slavic root dub meaning wood, oak but also to gouge. This second meaning comes from the time when utensils were made by gouging bowl like holes in pieces of wood and later stone. In Southern Slavic languages Dubiti means to gouge and Dubeni, Dubeno means gouged, with a gouged hole, bowl in it...Dubeni kameni in South Slavic languages means gouged stones, bowl stones...

But there is a special kind of these bowl stones which are found in the South Eastern Baltic that fall into a class of their own. These are so called "stones with narrow bottomed bowls". 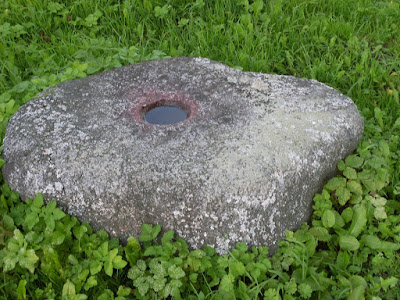 There are all together 250 narrow-bottomed bowls, but it is quite possible that more once existed, but were destroyed. Majority of these stones are concentrated in two areas: Central and Northern Lithuania / Central Latvia and in Eastern Lithuania. Only a couple of such stones were found in Samogitia.

Historical and archaeological records show that the stones with narrow bottomed bowls are very similar in dimensions and shape, regardless of the area in which they were found. The dimension homogeneity is quite stunning. Processed or unprocessed, the size of the stones varies only slightly. 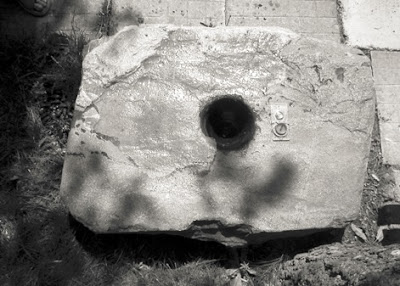 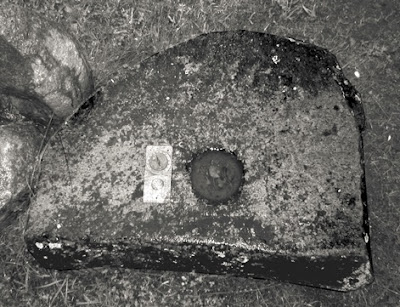 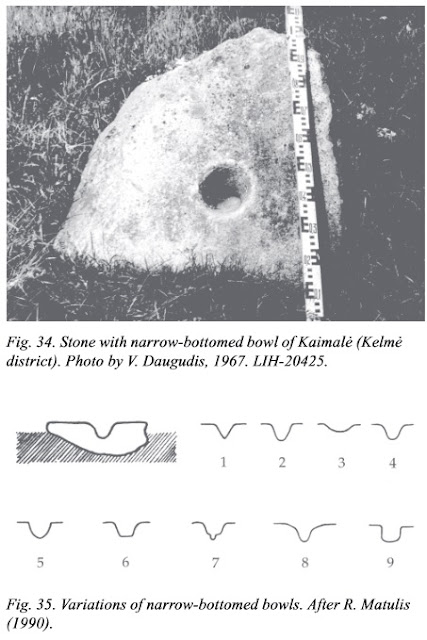 The stones are usually found on farms: near houses, barns and cattle sheds or inside them, quite often at the base of the building. Often there are 2 to 3 or even 4 to 5 stones with narrow bottomed bowls preserved in every village, for example Montviliskis, Vaiduloniai, Vileikiai. Today most of these stones are used as decorations. Sometimes these stones are used in churches for storing holy water, like in Dotnuva. But it seems that they were once used as corner stones, usually placed under the northern or north western corner of the house.

Up until the seventeenth century it was customary to build wooden buildings without diging foundations. A layer of stones was placed on the ground and then the wooden house frame was built on top of it. Corner stones were the most important of all as they were placed under the main four supporting vertical beams. The bowl in the corner stone was usually oriented towards the inner side of building. 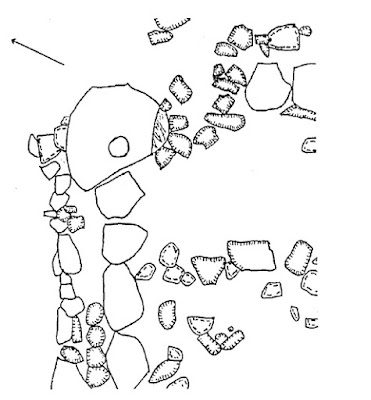 The archaeological investigation which was carried near 9 of these stones dated them to the period 16th - 17th century. However, excavation near the Montviliskis stone uncovered two holes of about one meter in diameter full of ashes, cattle bones and potsherds dated to 2nd millennium AD as well as potsherds from the period 16th - 18th century. The bones were all of young animals, indicating that they were sacrificed in a "first fruits" kind of sacrificial fertility ceremony.

There are ethnographic records from Lithuania which show that in the past, when the corner stones were placed in the ground, a special blessing and sacrifice ceremony was performed.  The hole in which the corner stone was to bi placed was dug first. Then the owner of the house would step into the hole and would drink some vodka and then all the workers working on the house would do the same and then they would share some food and continue working. The corner stones were marked with wax crosses and money was placed next to or under them. It was believed that god lived in them. Not only that, but it seems that the stones with narrow bottomed bowls were used as family altars.

At the beginning of the 17th century Jesuits described the stones with narrow bottomed bowls calling them "Deiviu akmenys" meaning "Goddess stones".
The report  from the 1600 says: In stores big stones are kept. They are dug into the ground, with the flat faced facing up. They are covered with straw. They are called "Deyves" (Goddesses) and are faithfully worshiped as the protectors of cereal and cattle.
The report from 1605 says: Some very uneducated village people due to our efforts got rid of the bad habit of worshiping one stone which they thought to be the god of granary, fruitfulness and happiness of home.

Even though it is not specifically stated that the sacred stones were "bowled", there is much in common between the stones described by Jesuits and stones with narrow bottomed bowls: their location in farm buildings, the fact that the top face of the stone was flat, the stones had the function of the cereal, cattle, happiness provider.

There are legends about the stones with narrow bottomed bowls which state that in the old times they were used as mortar stones for milling, grating or pounding. In Veriskiai, the local legends states that the stone was used by the Devil to grind tobacco.

Some stories preserved by old people talk about holy water being stored in the stones and that before that people used to pour milk into the hole for the grass snake, the houses snake, the incarnation of the house protector spirit in Balto Slavic religion.

In the 17th century Jesuits recorded the existence of a god called "Pagirinis", meaning "The one who lives under the quern, under the mortar stone" basically "The one who lives under the stone with narrow bottomed bowl". Knowing this it seems that the most probable function of the stones was as an altar to the god (goddess) protector of home. Another 17th century Jesuit report states that the god "Pagirinis" sometimes comes out of his corner in a shape of a grass snake, but that it spend most of his time buried in the soil, which is kept in a clay or wooden dish or without a dish under the quern (mortar stone, the stone with the narrow bottomed hole).

So this is very interesting. We have:

1. a corner stone
2. which is shaped like an ancient mortar stone
3. which was used as a fertility cult altar.
4. which is referred to as a "Goddesses stone"
5. which is the home of the male deity whose name means "The one who lives under the quern, under the mortar stone"

In some parts of Serbia the " thick wall" made of stone which supports the house is called Baba. 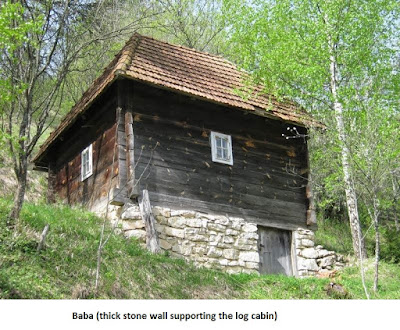 In Bulgaria thick logs which are put under log cabin corners to support the house are called "bа́bka". This gives additional meaning to the Serbian proverb that says that "the house stands on a woman". I wrote about it in the post "Baba - the main column, pole that supports the house". It seems that baba was any supporting structure on which the house stood.

In Serbian and in other Slavic languages the word Baba also means wich, goddess,  and not just any goddess, the Mother Earth. So it is not surprising that the above corner stones from Lithuania were called "Goddesses" stone. They are basically Baba's stone, as Baba, Mother Earth,  was the fertility goddess to which Lithuanians prayed to. Interestingly

The name of the male deity which is believed to live under the corner stone in Lithuania shows that that these stones were once actually used as grinding stones, as I postulated in my post about bullaun stones.

The fact that the mortar grinding stone was used as a fertility altar dedicated to the Mother Earth is not surprising at all either. A hole in the ground is where the plant seed is planted. A hole (vagina) in the lying woman is where human seed is planted. So a horizontal lying stone with a hole (mortar) is already suggestive enough. Mortar grinding stone and pestle even more. So much so that the mortar and pestle became the symbol of male and female genitalia in Hinduism (Yoni and Lingam).

This is a so called "wet" grinder mortar and pestle from India from this great blog post about making stone ground chutney. 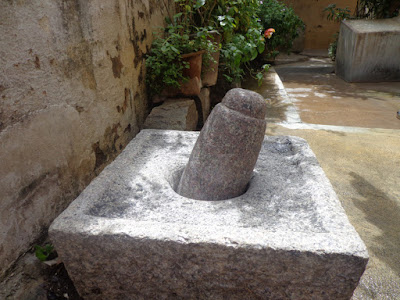 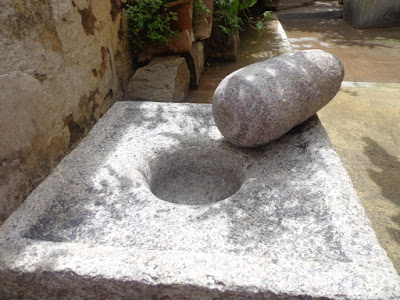 And this is Yoni and Lingam 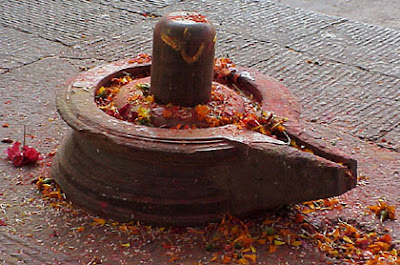 The union of sky and earth produces (releases) cereal seeds which are then poured into the mortar and pounded into flour with pestle in a motion which greatly resembles coital movement of penis (Lingam) inside vagina (Yoni) which produces (releases) human seeds which are poured into the vagina.... Do you see the link here? The fact that in the Baltic tradition milk was poured into bowl of the corner stone "for the snake to eat" confirms this, milk being symbolic replacement for sperm, milky white liquid containing human seeds. Once the cereal seeds are pounded into the flour flour is made into bread which is bake inside the bread oven which looks like the belly of a pregnant woman. And that bread oven is in Serbia called baba. Ovens were in old Slavic houses placed in north-eastern or north-western corner, just like the Goddess stones. 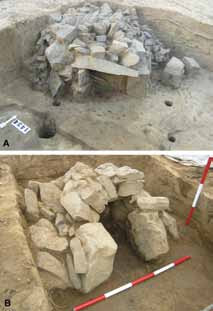 The belief that the house protector snake lives in the house foundation does not only exist in the Baltic countries. It is wide spread in Slavic countries and it exist in Serbia too. In Serbia the house protector snake is believe to live in the house heart (stone oven) or the house foundations (the layer of stones which supports the wooden house frame, corner stones originally). It is believed that this snake is the spirit of the founder of the family, some other very distinguished ancestor, or the first male ancestor who died in the house. Either way this snake is the symbol of the male ancestor, just like Lingam. So we have a mortar stone (Yoni) which houses (in a bowl) snake (Lingam)...

And this is it, the story about Lithuanian co called "stones with narrow bottomed bowls". I hope you enjoyed it. Until the next time, stay happy.