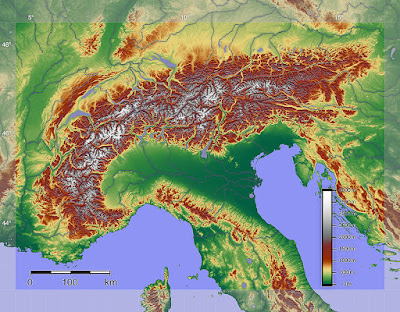 But these are not the only Alps in Europe. In The Balkans we find Dinaric mountains known also as Dinaric Alps. This mountain range stretches along the Eastern Adriatic coast across Albania, Serbia, Montenegro, Bosnia, Croatia and Slovenia. The highest peaks of the whole range are in the southern end which lies in Montenegro, Serbia and Albania. 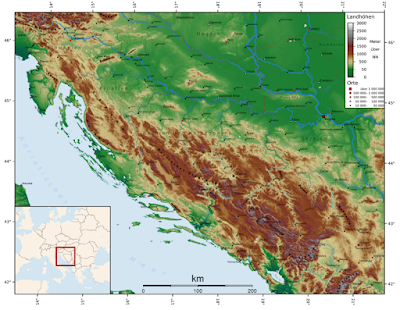 The official etymology says that we don't really know where the original word comes from.

Basically we have two theories.

Second theory proposes non-Indo-European origin. According to the English Etymological Dictionary, the Latin Alpes might possibly derive from a pre-Indo-European word *alb "hill, mountain". This theory then proceeds to propose that this supposed  pre-Indo-European word is the root of many Albania mountain areas: Balkan Albania, Caucasus Albania and Scottish Albania (Alban).

I would like to propose another theory: The word Alps comes from Gaelic and means "white stones, white cliffs, white peaks".

The first clue that the word Alps could be of a Gaelic (Celtic) origin can be found in a comment made by Maurus Servius Honoratus, a late fourth-century and early fifth-century grammarian, who in his time had a reputation of being the most learned man of his generation in Italy. He said in his commentary on Virgil (A. X 13) that: "all high mountains are called Alpes by Celts".

The second clue is the fact that in Latin the word "albus" is used primarily to mean "white" that is dull or matte which would mean more grayish white than bright shining white.

The fourth clue is that the German word Alp or Alm (meaning "seasonal high mountain pasture", from Old High German alpa, alba) was originally identical to the name of the Alps (German Alpen) itself.

Have a look at these two pictures. 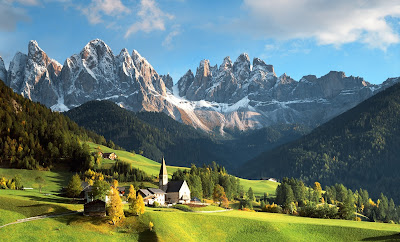 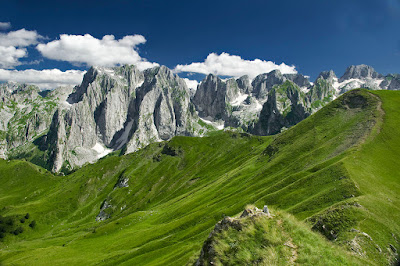 So what does this have to do with Gaelic?

In Gaelic we have this cluster based on the root word ail - stone, rock:

From the same root ail - large stone, rock we have this word:

In Gaelic we also have this word:

From these two words ail and bán we can make the construct:

What is also very interesting is that in Irish  the word "ailbh" means "flock, heard, drove".... Is this word derived from the fact that flocks, herds were driven up to the mountain pastures, ailban, alpen, alps, every summer? This is a high mountain pasture from Slovenian Alps. 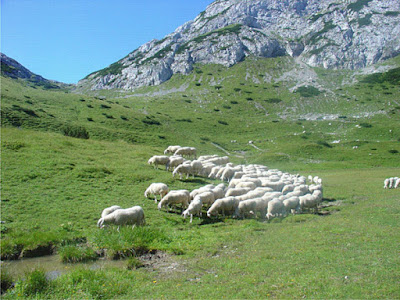 In A.D. 875 Scotland was still known under its Roman name: Caledonia. Caledonia was in turn divided among the following lands: the Kingdom of Alban, the Northern Islands, and the Borders, which include the Kingdom of Strathclyde, Galloway, and the northern portions of the Kingdom of Northumbria. 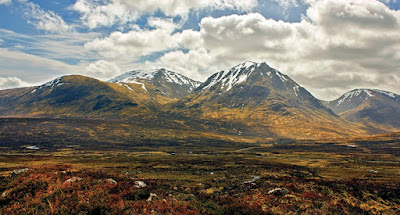 This is a picture of the highland pastures under the Matterhorn peak, Valais Alps, Switzerland. 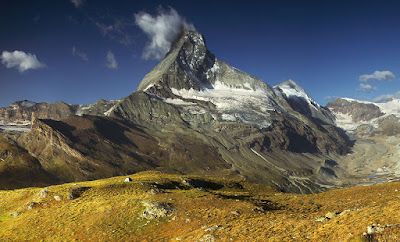 Do you see any similarity? High pastures with grayish white rocky peaks?

Alba is the Scottish Gaelic name (Pronounced Alpa) for Scotland. It is cognate to Alba (gen. Albann, dat. Albainn) in Irish and Nalbin in Manx, the two other Goidelic Insular Celtic languages, as well as words in the Brythonic Insular Celtic languages of Cornish (Alban) and Welsh (Yr Alban) that also, in modern practice, are the Goidelic and Brythonic names for Scotland; although in the past they were names for Britain as a whole, related to the Brythonic name Albion. The term first appears in classical texts as Ἀλβίων Albíon or Ἀλουΐων Alouíon (in Ptolemy's writings in Greek), later as Albion in Latin documents. Historically, the term refers to Britain as a whole. Is this name derived from the appearance of the white cliff of Dover, which is the first thing anyone crossing the Channel and approaching Britain would see? So when Gaels first approached Britain, and they was the white cliffs, they would have probably named the land they were about to land on "ail bán" = white cliff land. And if later a Greek traveller crossing into britain asked the Gaelic speaking natives what was the name of this new land (pointing at the white cliffs), they would probably tell him "ail bán" = white cliff? And hey presto, we have a name for this new land of white cliffs...(Thank you Tim for pointing this to me) 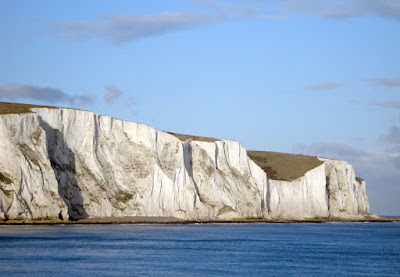 Gaelic speakers in Scotland used Alba (dative Albainn, genitive Albann, now obsolete) as the name given to the former kingdom of the Picts which lied along the Great Grampian Mountains, which is full of white greyish white rocky peaks covered in snow. Did the name originally just mean "white peaks", "the land of white peaks"? Not too many of those in Ireland, so it must have been some sight for the invading Gaels. So a fitting name for the new foreign land...

In the High Medieval period Alban became re-Latinized as "Albania". This latter word was employed mainly by Celto-Latin writers, and most famously by Geoffrey of Monmouth. It was this word which passed into Middle English as Albany, although very rarely was this used for the Kingdom of Scotland, but rather for the notional Duchy of Albany.
So is Gaelic ail bán - Alban - rock white - white rocks the root of the word Alpen, Alp? What is the relationship of this phrase and the Latin albus, Ancient Greek ἀλφός ‎(alphós) and Hittite alpas? Are they related at all? Is the Gaelic phrase the root of all these other words? Or is all this just a coincidence?

Is it possible that by the early Iron Age, the expression "ail bán", or some of the dialectal versions of this expression, entered Ancient Greek and Latin from Gaelic, or some other dialect of Celtic languages, in the meaning of white cliffs, white rocks, white peaks? And is it possible that this is why Greeks and Romans named the region lying along the Greater Caucaus - Albania?

Caucasian Albania (Latin: Albānia, Greek: Ἀλβανία, Albanía, in Old Armenian: Աղուանք Ałuankʿ (Aguank), Parthian: Ardhan, Middle Persian: Arran; Georgian: რანი, Rani); is a name for the historical region of the eastern Caucasus, that existed on the territory of present-day republic of Azerbaijan (where both of its capitals were located) and partially southern Dagestan. The territory lies on the southern part of the Greater Caucasus range. 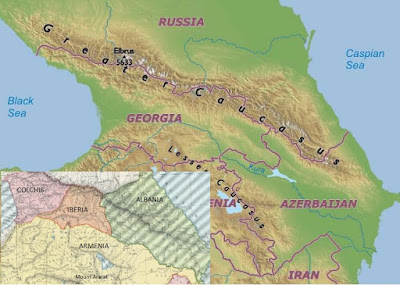 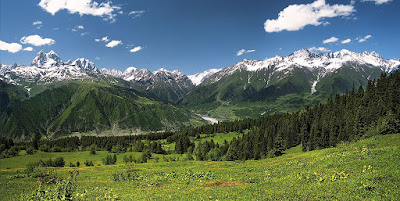 -ia is a word-forming element in names of countries, diseases, flowers, from Latin and Greek -ia, which forms abstract nouns of feminine gender. In paraphernalia, Mammalia, etc. it represents the Latin and Greek plural suffix of nouns in -ium or -ion.

And it is the same with the Balkan Albania, which only appeared in records in Early Medieval time. The highest peaks of the Dinaric range are found in its southern part which lies in Montenegro, Serbia and Albania. Viewed from the coast, you see giant rocky peaks covered with snow looming over green pastures. So was Albania used here just as a name for the land of white cliffs, white peaks? 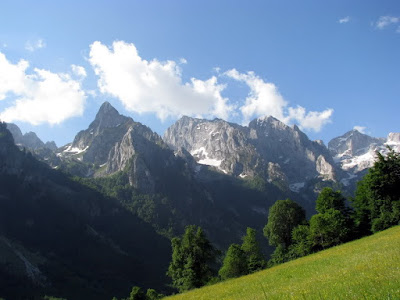 Let me know what you think about all this.