In my post about the etymology of the word Alps I talked about the Gaelic word "ail" meaning stone, rock, cliff. This post is about a place whose name is derived from the word "ail": Dun Ailinne.

Dún Ailinne is an ancient ceremonial site on the hill of Cnoc Ailinne in County Kildare, Ireland. It is southwest of Kilcullen, near the N78 road to Athy. 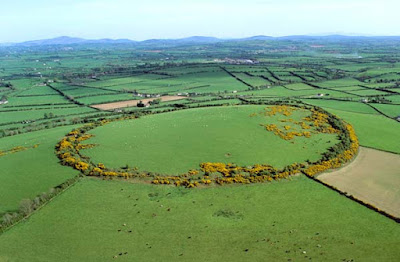 The site is circular, about 13 ha (32 ac) in area, ringed by an earth bank and ditch (or "henge"). As with most henges, the ditch is on the inside, meaning that it was likely to have been symbolic rather than defensive. It is believed that Dún Ailinne was a royal centre and inaugural or ceremonial site for the Kings of Leinster. In terms of its ritual use, the internal structures and layout, and its location and association, is similar to the other royal sites of Tara, Navan Fort and Rathcroghan. Indications of earliest use are from the Neolithic period, but the main activity there was during the Iron Age. It does not seem to have been dwelt in year-round, but was instead mostly used for short-term activity, including ritual. It seems to have been occupied during the Spring/Summer months and there is evidence of cooking, which include a great deal of bone from cows, sheep, pigs, deer and horses. In 1968 a caesium magnetometer survey and a resistivity survey was undertaken that highlighted an area in the low mound, later revealed as areas of intense burning. A La Tène style sword and Roman bronze fibulae have also been found at the site. The artefacts suggested intense activity in the Iron Age and/or Early Medieval period that disturbed a Neolithic occupation phase. While it figures in some early historical references, Dún Ailinne was mostly abandoned about the time the nearby early Christian settlement at Old Kilcullen was established in the 6th century.

This is a drawing showing the results of the geophisical survey of the site. You can see various overlapping features dating to different time periods. 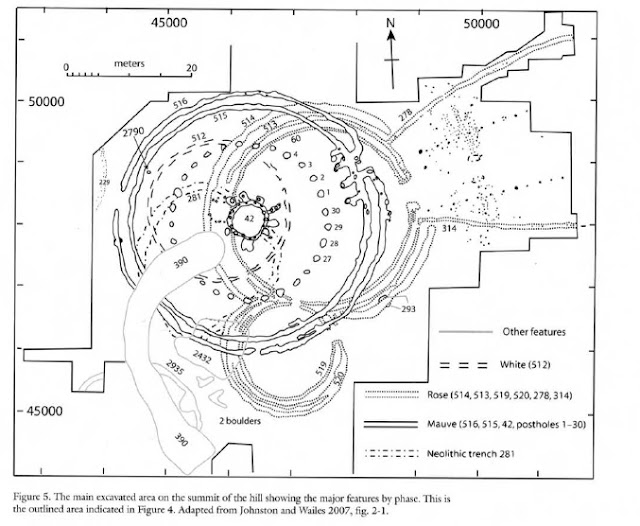 The images below show a time-lapse sequence of the summer solstice sunset as observed from Dún Ailinne. You can see that the sun touches the top of the Dunmurry hill, and it then proceeds to slide down the side of it, until it finally disappears behind the hill. 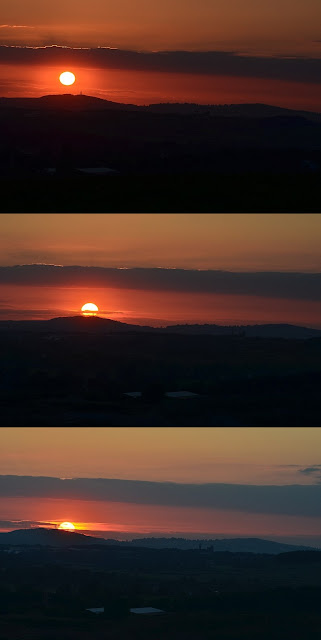 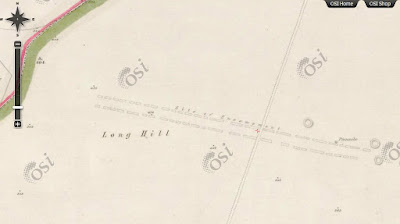 Cursus was a name given by early British archaeologists such as William Stukeley to the large parallel lengths of banks with external ditches which they thought were early Roman athletic courses, hence the Latin name cursus, meaning "course". Cursus monuments are now understood to be Neolithic structures and represent some of the oldest prehistoric monumental structures of the British Isles. Long hill Cursos is by some believed to be approximately 1.5km. long and almost 100m. wide, but it is more likely for it to have been just over a kilometre long and approximately 50 metres wide. The OSI map also records clusters of barrows at each end of the Cursus - Cluster 'E' at the W-NW end and Cluster 'F' at the E-SE end (Ref. Pádraig Clancy's study of the ancient monuments of the Curragh). 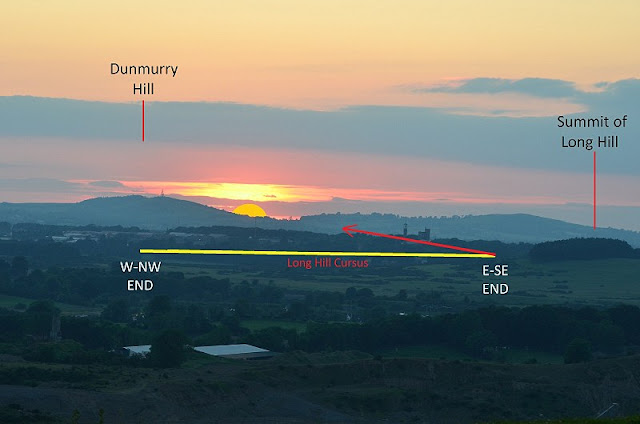 It seems that the Long hill cursus was deliberately built to create the sacred triangle visible from the Dún Ailinne. In which case Dún Ailinne was not just any ceremonial site but a solar observatory and solar temple. I already wrote about ancient henge solar observatories and solar temples in my post about Henges - Rondel enclosures. The henge was dug to mark the solar observation circle and there was probably a tall stake or a tall standing stone standing somewhere inside the henge circle working as a gnomon. The shaddow cast by the gnomon stone at sunrise was used to determine the exact date. The fact the sun also performed the gliding, or rolling down the Dunmurry hill on the eve of the summer solstice, just made the Dún Ailinne more special. Is there a proof that there was once such a standing stone in Dún Ailinne? There is.

A verse in the Dindsenchas mentions how Dún Ailinne/Alend acquired its name:

Three mighty men made essays of trenchings,
Burech, Fiach, and Aururas:
it is they who without flagging (clear fact!)
dug the rampart of Alend.

Buirech cast from him straightway
across the rampart(no weakling he!) -
a stone he cast from his spear-arm;
and that is the ail in Alend.

This seems to suggest that Buirech placed the Ail (Stone) standing upright on a mound, inside the henge (trenching) that sat at the summit of the Cnoc Ailinne.

Today you will see three very large boulders on the summit, two look like limestone boulders (although it's possible they're both very weathered granite) and an elongated white granite boulder. John O'Donovan's survey of Dún Ailinne in 1837 records only "two rough mountain boulders of considerable size. One of these might be the Ail mentioned in the Dindseanchus as placed in the mound by the hero Buirech......". O'Donovan also records a scattering of stone debris on the summit which he interpreted as a "fort.......much effaced", but Estyn Evans suggests this scatter of stone and the large boulders may have been the remnants of a Neolithic/Early Bronze Age cairn. I would say that the scattering of stones and the remaining boulders are all parts of the original gigantic standing stone after which the Dún Ailinne got its name, and which was deliberately destroyed, possibly during the early Christianization of Ireland and maybe even later.

The images below show the large boulders that now sit on the summit of Dún Ailinne.There'sisible line of drill holes in the large elongated white granite boulder. You can clearly see weathering on one side,but the opposite side shows areas which look significantly fresher,which could suggest it was deliberately broken in recent times. Was this boulder part of a much larger monolith? 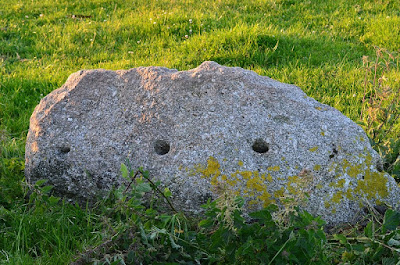 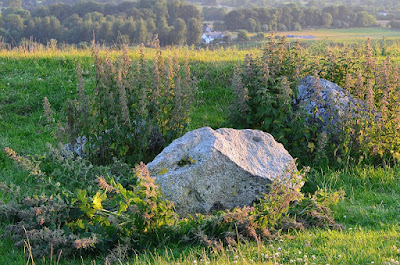 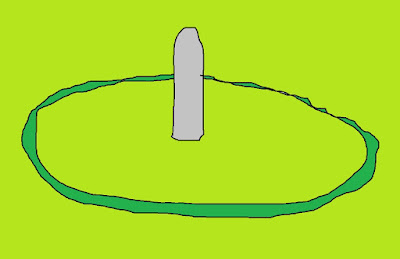 If there is a possibility that Dún Ailinne was once used as a solar observatory, solar calendar, with the central rock pillar (ail) inside of a henge (dún) and which was used to determine the day of the Summer solstice, the beginning of the solar year, the beginning of a new solar cycle, the new "time period" (linn) is it possible that the name Dún Ailinne actually means "The enclosure of the time stone", the solar calendar?

I would like to thank "bonedigger" for all his great work in exploring Irish megalithic sites and drawing public attention to their possible astronomical features.