As I explained in one of my previous posts, the development of Copper Age tumulus in the territory of Montenegro went through several stages during the first half of the 3rd millennium BC eventually producing something like this: free standing dolmen cist covered with curbed multilayered earth - stone tumulus. 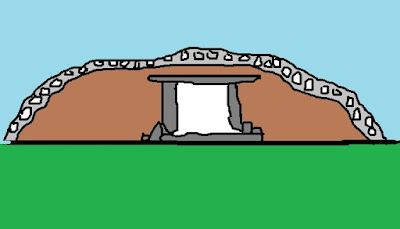 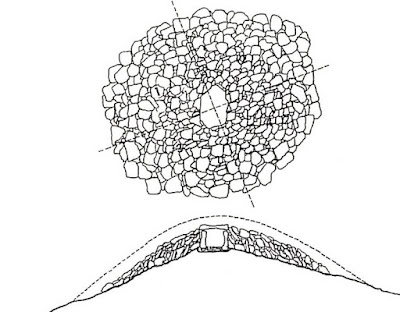 A typical example of this type of burial is a group of tumuluses, located on the Planinica (little mountain) hill in Tuzi area in south eastern Montenegro. The tumulus group is described in the article "Bronze-Age stone tumuli on Planinica Hill, obš. Tuzi, Montenegro" published by Urszula Bugaj, Predrag Lutovac, Miron Bogacki, Maciej Trzeciecki and Mario Novak.

The stone tumuluses from this groups have diameters ranging from 11–16 m and heights up to 2 m. All three tumuluses have the form of an embankment of medium-sized broken stones (curb, stone circle) filled with stone rubble. In the centers of tumuluses there is a stone cist consisting of four upright stone slabs and a horizontal top slab.  The whole construction resembles an artificial stone hill with the stone cist placed into the pit dug in the middle of stone hill, where in fact the stone cist was placed on the surface and the stones were piled up against it forming the artificial stone hill (cairn).

The Planinica tumulus group has its counterparts in the tumulus group located near the village of Rječani in Nikšić area in north-western Montenegro.

Even though the current state of research of the Montenegrian tumuluses is very poor, it can be stated, however, that this group of stone tumuluses belongs to a definite tradition of burying the dead, which developed in this part of the Balkan Peninsula from the late Copper Age, early Bronze Age. These tumuluses were used for a relatively long time, retaining the tradition of the location while the burial rite or the forms of graves were changing.

These are tumulus 1 and 2 from Planica hill: 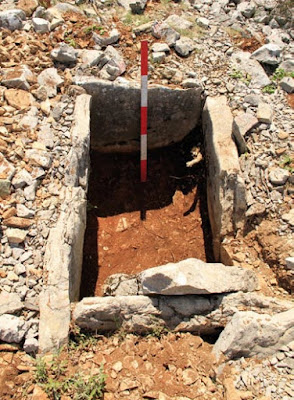 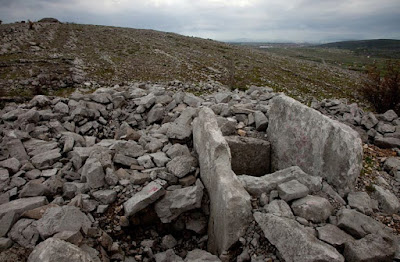 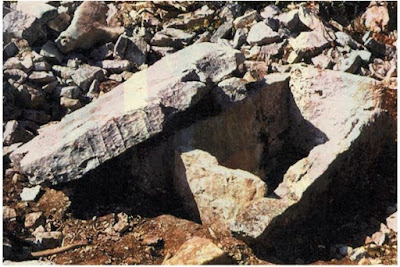 What is interesting is that we find exactly the same type of burial in Britain, dated to the early to middle Bronze Age. These burials are known as curbed stone cairns, or ring cairns. They consist of a massive stone cist placed in a hole dug the middle of an artificial stone hill (cairn) surrounded with one or many stone circles (curbs). I will here give few examples of curbed stone cairns. There are many more strewn across Britain.

This is one of two curbed stone cairns, or ring cairns at Temple Wood in the Kilmartin valley. 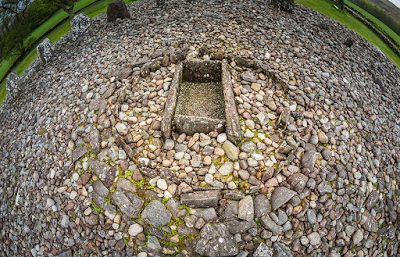 It was constructed over a stone cist in which cremated bones were found. The cairn was surrounded by a stone circle constructed out of 22 massive stone and is about 40 feet (twelve metres) in diameter. Three of these stones have been carved: one with a number of concentric circles; another with two spirals - one on each of two adjoining faces with the ends of the spirals meeting at the edge; and a third with cup-marks. Two cairns were built over cists outside the stone circle. Later a large cairn was built up which covered the inner cairn, the stone circle and the two outer cairns. Post holes from another stone circle were found just a little way from the main Temple Wood circle. You can find more great photographs of this cairn on this page of the Ancient Scotland site. The dating of this complex is uncertain. Originally it was thought that the site was built around 4000 BC, but it is now believed that it is more likely that the site was built in the early Bronze Age. 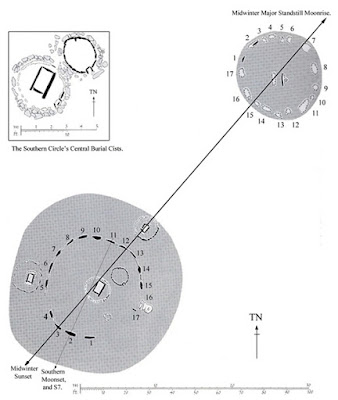 From the northern circle, the midwinter sun would have set in line with the southern circle. The concentric circles on stone 12 and the double spirals on stone 10 could be symbolizing this event. You can find more details about this bronze age complex on this page from the Antiquity site.

This is Carn Llechart, one of the largest curbed stone cairns, or ring cairns in Wales. 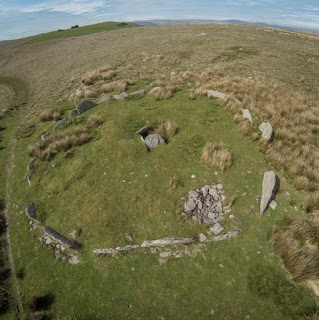 The stone circle (curb) is 12m in diameter, consisting of 25 outwards-facing stones, and the central cist has its east side stone and capstone missing. It seems that there is no entry to the circle and no trace of a covering mound.The cairn appears vividly against the skyline when it is approached along the track-way from the North.

Aubrey Burl in his "The Stone Circles of British Isles" wrote that such rings were thought to be the first stage of development of stone circles, but that these cairns, however, are almost certainly too late to provide such an ancestry. The reverse seems likely, that the existence of stone circles elsewhere impelled people to place tall stones around the bases of their own round cairns, a fusion of traditions resulting in monuments like spiky coronets. You can see more photos of this site on this page from the Ancient Wisdom site and this page from the Modern Antiquarian site.

You can see that cist cairn has a form of an embankment of medium-sized broken stones (curb, stone circle) filled with stone rubble with the stone cist placed in the middle. 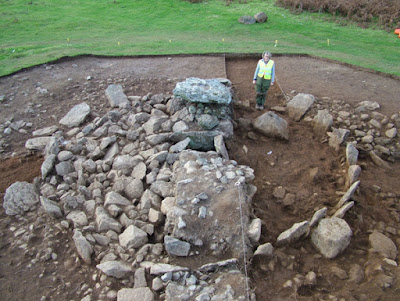 You can find a lot of information about the Llanelwedd circle cist on this great page from the CPAT site.

This is Turf Knowe, a bronze age cist cairn, located near Ingram, Northumberland, Great Britain. Originally thought to be a field clearance cairn, excavation over the years 1994-97 revealed a central stone cist (coffin) which contained a burial with a jet bead necklace and a well-preserved, upturned food vessel. A second cist contained several cremations but no pots. Other cremations, some with pots, had been inserted into the cairn structure, including an infant who had apparently died from meningitis over 4000 years ago. 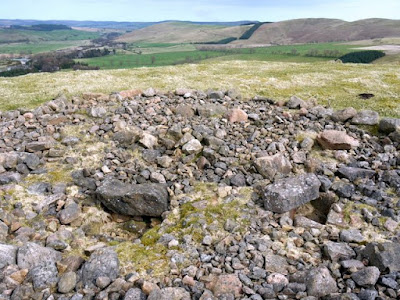 What is interesting is that the only site that I could find in Ireland that vaguely looks like curbed stone cairn is the Poulawack Cairn which is located in Burren, Western Ireland.

Poulawack Cairn has been dated variously by several observers to be between 3000 and 1900 B.C.. Before excavation, this round cairn measured 20.75m N/S and 21.25m E/W. Under it were found two concentric kerbs or revetments. 10 graves were found within the revetments containing remains of 16 people. Very few of the remains showed signs of cremation, indicating Bronze Age origin, a period when unburnt burials were quite common. The cairn material which had consisted in the main of limestone slabs had been carefully laid and it was evident in a change in orientation in the stones that a considerable part of the upper levels of the cairn had been disturbed in the course of a secondary insertion of a number of cist graves. 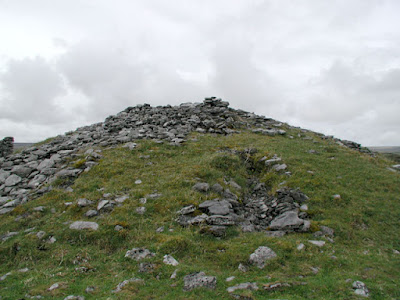 You can find more info and pictures of the Poulawack Cairn on this page of the Ancient Ireland site and this page of the Saints and stones site. If anyone has any info about any other ring cairn from Ireland please let me know so that I can add the information about it to this post.

So it seems that here we have another example of a cultural development which first appeared in the Balkans Montenegro during the late Copper Age, early Bronze Age and which was then brought to the British Isles during the early Bronze Age. Is this another sign of a migration from Montenegro to Britain during the mid 3rd millennium BC? I think it is. What do you think?