In this post I will talk about the shepherd's chapels from Mount Velebit in Croatia. They offer us even more direct proof of the replacement of the Mother Goddess, Mother Earth, Baba with Mary, the Holy Mother.

Alpine transhumance is a seasonal droving of grazing livestock between the valleys in winter and the high mountain pastures in summer. Transhumance is a traditional practice that has shaped much of the landscape in the Alps, as without it, most areas below 2,000 m would be forests. The exactly the same type of practice existed once on Dinaric Alps.

This is the highland pasture area called Jezera (Lakes) on mountain Velebit in Croatia. This is the area where in the past people living around the mountain used to bring flocks of sheep and goats and herds of  cows to spend the hot summers grazing on a good green highland grass.

Each large grazing area had pre Christian shepherd's temples with sacrificial altar. These pagan temples were later turned into Christian churches, locally known as "stočarske kapelice" (shepherd's chapels). The oldest one is the shepherd's chapel in Jezera (Lakes) plateau grazing area. There on top of the "Goli hrbat" (Naked back), at the height of 1470 m above the sea level, lie in complete isolation ruins of an ancient sacral building with dimension 10 x 5 meters. The stone walls, which were built using dry wall building technique, were 1.3 meters thick. The most unusual thing about this chapel is the altar stone. The altar is actually bedrock, which existed there before the church was built. Bedrock is in the Balkans known as "kamen živac, živi kamen, živa stena" (living stone, living rock) and is venerated as sacred. They are called so, because they are believed to be still part of the living body of the Mother Earth. These types of stones are also known as "baba" stones. The fact that the altar stone was carved out of bedrock shows that this was an ancient pre Christian altar stone which was later encased inside of the Christian church, surrounded by the thick church walls in order to have it's "evil" power contained.

There is something very interesting about this church though. In his article: "Nekateri topografski vidiki obrednih mest [Some Topographic Aspects of Ritual Places ]" Andrej Pleterski says:
"One of the diagonals of the church is aligned exactly to the east west line. The longitudinal axis of the church has azimuth of 123,5° (angle from geographic north). This means that the church is oriented towards the local point of the Christmas sunrise. Therefore, it is very likely that the original orientation of the pagan temple which was replaced with the church, was towards the winter solstice sunrise."

Was this an ancient solar observatory used for determining the beginning of the solar year? In order to carve the shepherd's solar year calendars that I wrote about in this post....

The church which is now the only visible structure in the area was once surrounded by a large summer shepherd's settlement which is in the Balkans called "stan" or "katun" or "tor". This settlement even had an artificial lake made from a converted sink hole. The bottom of the sink hole was paved with large stone plates and a stone wall was built along the perimeter, turning the sink hole into a giant cistern. This is why the area was known as Jezera (Lakes). Every year on the 15th of August, on the day of the Assumption of Mary, shepherd's had a large festival with a fair which was organized in the area around the holy Baba stone and later the church dedicated to Holy Mary. On that day, all the sheep, goats and cattle had to be gathered and brought to the pens and corals before 10 am in the morning, because that was the time when the holy mass started. After the mass, a special meal was prepared. Every family would kill (sacrifice) a lamb or a young goat, which was then cooked in a broth. This soup was then brought to the church where a communal meal would take place.

The shepherd's chapel in Jezera (Lakes) area is not the only Christian chapel built around an ancient bedrock altar stone. There used to be another one on "Veliko Rujno" (Big Rujno) plateau.

But today the only thing left is the original bedrock altar - Baba. The stones from the old church which once encased this old pagan altar were used to build a new church dedicated to Holy Mary in 1930 and which stands 50 meters away from the old altar stone.

Next to old bedrock altar lies a large stone slab. The locals say that this slab marks "the grave of an innocent child". Every year on the 15th of August, on the day of the Assumption of Mary the shepherd's used to drive their flocks over this slab in order to cleanse them from decease and evil.

Near by is another highland plateau called "Malo Rujno" (Little Rujno).


On it there is a similar stone block which local shepherd's called "Baba". On the arrival, shepherd women used to bring food offerings and leave them on the stone. They also used to lite candles on the stone on various holy days. The stone was also known as "the altar".

According to the local informer Dara Babac :) , who was 80 years old when she was interviewed, Baba stone on Malo Rujno was blessed by a priest from Lika region, and this is why this stone is also called Babin kuk (Baba's stone, kuk being another word for rock, boulder) or Popov kuk (Priest's stone). Women who couldn't have children were praying to the Baba stone to help them to stay pregnant and give birth to a healthy child. During this prayer they were kissing the stone. After the second world war, the stone lost it's cultic importance, but the act of kissing the Baba stone was transferred to kissing any old woman. Young girls which were earlier urged to kiss the Baba stone "for their own good" were urged to kiss any old woman that they see, also "for their own good". The kissing ritual was also transferred from the Baba stone to its Christian replacement, the statue of the Holy Mary. During the prayer in the chapel on Veliko Rujno, women circled the altar on their knees. At the end of the prayer they would kiss the feet and the dress of the statue. They were also kissing the picture of the Holy Mary during the procession which circled the church.

Another ancient shepherd's chapel on Velebit mountain lies at the end of the "Grabov dol" (hornbeam valley) on the edge of the "Mala Paklenica" (Small hell) gorge.


The chapel was dedicated to the shepherd's saint, Saint Jacob. Today the chapel lies in ruins. Please note the statue of Mary placed inside the church ruins.


Another shepherd's chapel used to stand in the near by Libinje plateau, under Sveto brdo (Holy hill).

The chapel was dedicated to st Antun, but about 20 years ago the last trace of this chapel have disappeared. This is another place where shepherd's used to have their gathering, mass and fair immediately after the arrival on the mountain in the spring. The chapel was surrounded with stone sheep pens where the flocks were kept during the ceremonies. The sheep pens were made using the same dry wall building technique used to build the chapel.

The fact that Baba (stone, mountain, earth) was specially venerated on Velebit can be seen from a large number of toponyms with the root Baba which are found in immediate vicinity (20 km radius)

So what happened after the local population was Christianized? The same area became the most important center of the Marian cult. Coincidence?

It seems that the shepherd's from south Velebit, both Orthodox and Catholic, preserved many pre-Christian traditions, customs and ceremonies until the mid 20th century. The most important set of these pagan rituals is linked to the veneration of the Mother Goddess, the female symbol of fertility and wealth - Baba, Mother Earth. These rituals were performed on and around protruding amorphous lumps of bedrock which are in this region, as well as in many other parts of the Balkans, known as Baba stones, like this one. 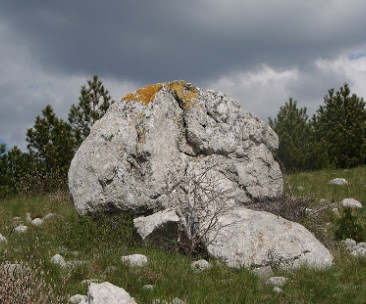 The fact that the same type of veneration was directed towards these stones by both Catholics on Veliko Rujno plateau and by Orthodox Christians and Muslims on Malo Rujno plateau, shows that this custom predates the arrival of Christianity and Islam.