An ear is the grain-bearing tip part of the stem of a cereal plant, such as wheat or maize. 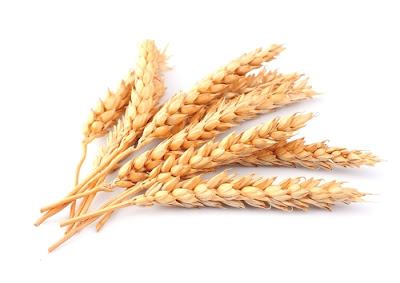 If you look at the wheat plant, you can see that ear looks like a head standing on a long neck (stem). 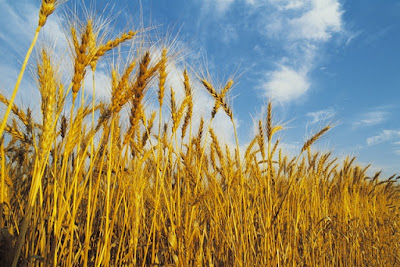 The wheat is basically "slaughtered".

In the past this was done by hand using sickle, and the wheat plant necks (stems) were cut quite close to the wheat head (ear). This was done to make the transport and storage of the ears of wheat easier. You can see what I mean from the next few pictures which depict grain harvest during medieval time. 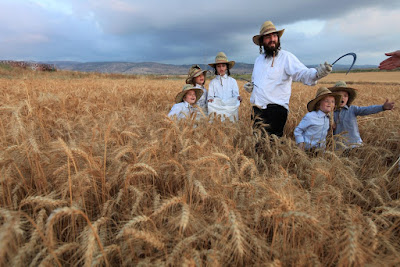 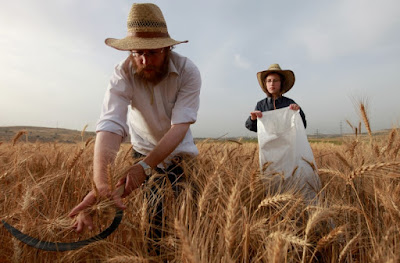 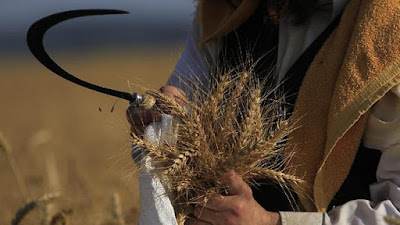 In Serbian the word for ear of corn is "klas". It comes from Proto-Slavic *kolsъ. which also means ear of corn and it has cognates in all Slavic languages.

The Proto-Slavic word *kolsъ does not have any proposed deeper etymology. So I would like to propose one.

According to the Russian etymological dictionary, the word klas could be cognate with Albanian "kall" meaning to "to stick (on, into), put (up), thrust, instigate" which is cognate with "klati" meaning to cut, to slaughter. The same entry in the Russian etymological dictionary mentions the Latin word "collum" which means neck, throat, upper stem of a plant, (symbolically) servitude, and says that it is not the cognate. But I believe that it is. This again could be coming from the same root "klati" meaning "to slaughter". The word "koljem" means "I slaughter" or "what I slaughter, where I slaughter". So "collum" = "koljem" = "what I cut" = neck, upper stem of a plant...

I like the gruesome bluntness of this... It is almost poetic... And it is ancient.


Is it possible that this word comes from the time when agriculture was being spread through Europe. From the time when the future nouns used today for parts of the wheat plants were still being formed from verbs explaining what to do with these plant parts.

We also have the Latin word "classis" which means "any one of the five divisions into which Servius Tullius divided the Roman citizenry, the armed forces, fleet, a group, rank, or class", but which is said to be derived from Proto-Indo-European *kelh₁- ‎(“to call, shout”)...But again is it possible that this word was derived from the word "klas" meaning "bunch, cluster of seeds"?

So what do you think? Maybe this will sway you towards my original etymology:

Guldize. Guldize is Cornish language for "The feast of ricks" (i.e. grain stacks). The festival itself was held at the end of the wheat harvest and took the form of a vast feast.

The festival started with the ceremony called "Crying The Neck".

In "The Story of Cornwall", by Kenneth Hamilton Jenkin, the ceremony is described like this:

"In those days the whole of the reaping had to be done either with the hook or scythe. The harvest, in consequence, often lasted for many weeks. When the time came to cut the last handful of standing corn, one of the reapers would lift up the bunch high above his head and call out in a loud voice.....,

The rest would then shout,

and the reply would be:

Everyone then joined in shouting: 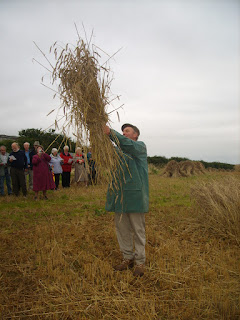 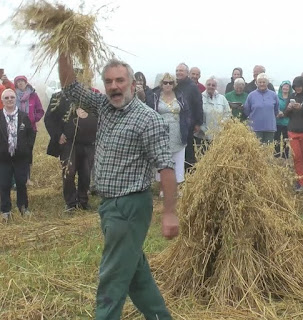 The cutting of the last handful of standing corn was also symbolically seen as cutting of the head of the corn spirit. Our ancestors believed that the spirit resided in the head and this is why after the ceremony of Crying The Neck, the neck was used to make a corn effigy which was then believed to contain, preserve, the corn spirit. In Cornwall this corn effigy, or Corn Dolly presided over the Guldize feast which later took place in the farmhouse kitchen.
Posted by oldeuropeanculture at 16:39