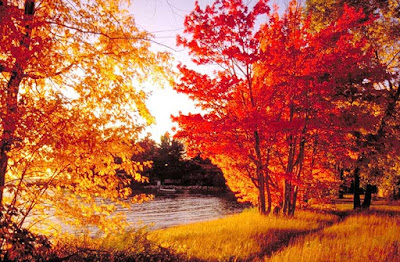 Indian summer is a period of unseasonably warm, dry weather that sometimes occurs in autumn, from mid September to late November, in the Northern Hemisphere. This warm period in autumn has many different names in Europe but they all seem to fall into these main categories:

It is believed that these names are derived from the fact that the good weather at the end of autumn allows poor people to collect whatever is left of the cultivated and forest crops and so survive the winter.

Summer of of one of the autumn saints

The indian summer period fall between these two dates:
autumn equinox (21 of September, mid point of the climatic autumn) converted to the St Michael's day celebrated on the 29th of September.
5th of November (the mid point between the autumn equinox and the winter solstice, the beginning of the climatic winter) converted to St Martin's day celebrated on the 11th of Novemeber.

Basically this is the second part of the climatic autumn, when the weather is supposed to deteriorate. So good warm weather at this time is "unseasonable". If the warm period is closer to the beginning of this period then it is called "The summer of St Michael" and if it falls closer to the end of this period it is called "The summer of St Martin".

These names are either linked to a particular animal or plant whose behavior is influenced by this warm spell or it just means late summer, or another summer

This particular name for the indian summer is what I would like to talk about in this article.

There are several theories about the origin of the name "Babje leto" (Grandmother's summer).

One theory says that the name comes from the meaning "second youth in women". The "second youth" is contemptuously viewed as short-lived and ill-timed. If this was the origin of the name, then "Babje leto" (Grandmother's summer) would also have been seen as something bad and out of place. But that is not the case. "Babje leto" (Grandmother's summer) is seen as something good, as a precious gift. And the name "Babje leto"  (Grandmother's summer) tells us clearly who the people believed this gift of the good weather was from: Baba, the great goddess. In Slavic tradition apart from being mother Earth, Baba also controlled the waters, the cold and ruled the winter. She was the complementing opposite to the Father Sky, who controlled the sun, the heat and ruled the summer. So it is quite possible that the expression "Babje leto"  (Grandmother's summer)  was originally Slavic in origin and comes from the Slavic belief system. It then spread into the countries, which once had large Slavic population, and were strongly influenced by the Slavic culture, such as  Germany, Austria, Switzerland, Lithuania, Hungary, Finland.

Another proposed reason why the late summer is called "babje leto" (Grandmother's summer) is that this is the time of the year when young males of a certain type of spiders, Linyphiidae, produce long strands of spiderweb on which they then fly through the air. 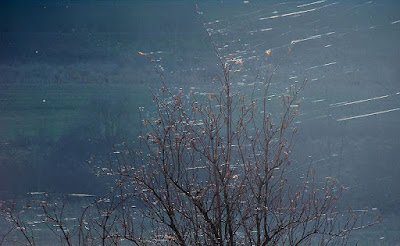 In English this flying spider web is known as gossamer. The English Etymological Dictionary says that this word was first recorded around 1300 AD, meaning "filmy substance (actually spider threads) found in fields of stubble in late fall". It is not known where does this word come from. One theory says that it comes from gos "goose" + sumer "summer" and that the word probably comes from an original sense of "late fall; Indian summer" because geese are in season then. However it is much more likely that the word comes from go + summer = going away, end of summer. Compare obsolete Scottish go-summer "period of summer-like weather in late autumn.".

Swedish and Dutch names for these spider threads clearly show that the word gossamer has to do with the end of the summer: Swedish "sommartrad" meaning "summer thread", Dutch "zommerdraden" meaning "summer tread". It is interesting that in Slavic languages the word "konac" means both "thread" and "end". So the expression "konac leta" would mean both the summer thread and the summer's end. So is it possible that all of this is somehow related, and that the Germanic names for this type of spider threads are direct translations of the Slavic expression "konac leta" meaning summer's end. It is very poetic in a way that the shiny silvery spider threads (konac) which appears at the end (konac) of the white, hot part of the year (summer, autumn).

As I already said in German Babje leto is called "Altweibersommer" which literally means "the old woman's summer". The word weib is an archaic German word meaning woman, wife. This word is very close to an old Germanic root word "web" meaning net, something woven, like spider net which is related to an old Germanic root verb "weben" meaning to weave. So we can see here clear link between web (made of thread) and wife, woman. However it seems that in Germany, the expression "Altweibersommer" has only been in use since the 17th century, which points to an old cultural import. I would like to confirm this however, so if anyone has any more info about the history of this expression in German, I would be more than grateful if you send it to me, so I can update this post.

So no wonder that that in German this type of flying spider tread was once called "Marien garn, Marien faden". There is a folk belief that these threads are remnants of the cloth used to wrap the body of the Virgin Mary, and which unraveled into the threads and dropped from the sky during her ascension.

In most Slavic languages these strands of spiderweb are called "bapske vlasi", "babina kosa" meaning baba's hair, grandmother's hair, or witch's hair. Folk belief is that this is the time when new witches are inaugurated and that the flying strands of spiderweb are their hair. People also believed that this spiderweb was tow, unprocessed wool, used by fairies, witches and Virgin Mary for making thread.  and that a girl will soon get married if this flying spiderweb got entangled into her hair.

Theotokos literally means "God-bearer", "Birth-Giver of God" and "the one who gives birth to God." Less accurate translations include the primarily Western title "Mother of God" (Latin: Mater Dei). It is funny that the Nativity of the Theotokos, which is in Serbian called "Mala Gospojina", and which is celebrating the birth of Mary, is celebrated, according to the old Julian calendar on the 8th of September. This day falls in the middle of the Virgo zodiac sign: 23 August – 23 September. Strange don't you think? According to the new Gregorian calendar this day falls on the 21st of September, autumn equinox. It is the date when the night becomes longer than the day. The we enter the part of the year dominated by the destructive female principle the Goddess, Baba. The period dominated by darkness, dampness and cold. No wonder that the good warm and dry weather during this period is seen as the gift from Baba. This is why it is called "Babje leto", Grandmother's summer. The normal summer is gift from god, Dabog, Grandfather.

Anyway, the Intercession of the Theotokos celebrates the protection afforded the faithful through the intercessions (actions of intervening on behalf of another) of the Theotokos (Virgin Mary). In the Russian Orthodox Church it is celebrated as the most important solemnity after the Twelve Great Feasts. The feast is commemorated in Eastern Orthodoxy as a whole, but by no means as fervently as it is in Russia, Belarus and Ukraine. Interestingly this religious celebration is in Slavic languages also known as "Pokrov" and in Greek as "Skepe".

According to Eastern Orthodox Sacred Tradition, the apparition of Mary the Theotokos occurred during the 10th century at the Blachernae church in Constantinople where several of her relics (her robe, veil, and part of her belt) were kept. On Sunday, October the 1st at four in the morning, St. Andrew the Blessed Fool-for-Christ, who was a Slav by birth, saw the dome of the church open and the Virgin Mary enter, moving in the air above him, glowing and surrounded by angels and saints. She knelt and prayed with tears for all faithful Christians in the world. The Virgin Mary asked Her Son, Jesus Christ, to accept the prayers of all the people entreating Him and looking for Her protection. Once Her prayer was completed, She walked to the altar and continued to pray. Afterwards, She spread Her veil over all the people in the church as a protection. 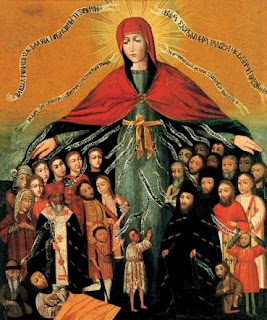 So it is most likely that originally Slavs saw the  spider treads which fly during the "Babje leto" as Baba's, Great Goddess' hair falling from the sky symbolically covering and protecting her people. I believe that the white silvery shining spider web threads, Baba's hair, were symbols of snow and ice of winter, when Old Mother Earth becomes gray white. There is a belief in Slavic countries that if we have Babje leto the following winter will be long, showy and cold.

The Pokrov icon may be related to the Western Virgin of Mercy image, in which the Virgin spreads wide her cloak to cover and protect a group of kneeling supplicants. 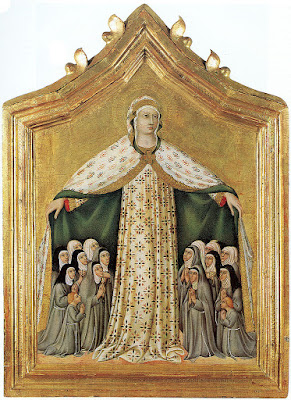 The first known examples of this type of icons date from Italy at about 1280 and were probably influenced by Slavic Christian art from the Balkans, which we say was influenced by the old pagan Slavic beliefs.

I want to thank my friend Jože Kotnik for helping me with translation of some articles from Slovenian.