This is a shepherd's shack from Montenegrin highlands. 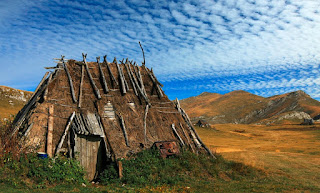 This is a type of semi temporary shelter which consists of wooden stakes frame, which is then covered by crisscrossed branches (sticks) and a thick layer of debris (or hay) and reinforced by additional interlocked wooden beams.

I believe that this is probably one of the earliest types of shelters made by man, because it is so easy to make even without any cutting tools.

Here you can see how such a shelter can made in the wilderness by simply collecting and piling up deadwood logs, stakes and sticks and then covering the whole structure with branches and dead leaves from the forest floor: 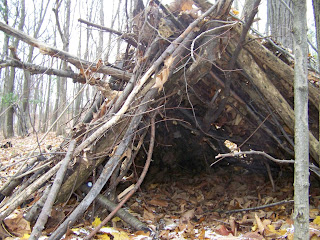 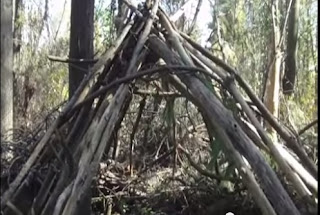 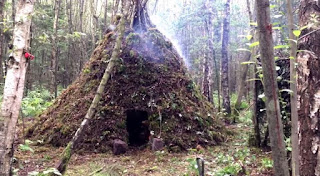 This is a good video showing how to make these shelters.

Of course cutting tools like axes would help speed up this building process and make it easier to get hold of young long strong saplings that are perfect for making stakes which can be used for shelter's frame. 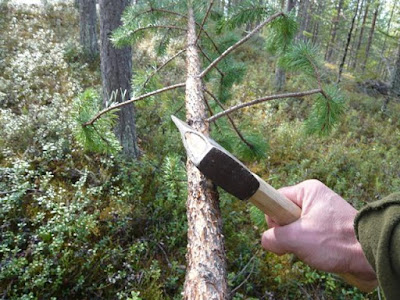 Once you have strong long stakes, if you use a hide or canvas cover instead of a debris cover you get a classic tipi: 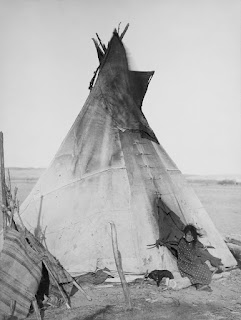 And if you stick the support stakes into the ground, and interweave the branches around them, you get wattle. If you then mix a debris (hay, dried grass) with mud and smear this mixture over the wattled walls, you get a wattle and daub house. You then use more debris (dry grass, reeds, hay) to cover the structure and you get a thatched wattle and daub house... 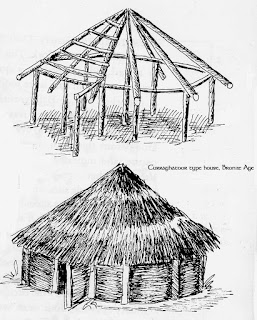 This great video entitled "Primitive Technology: Wattle and Daub Hut" shows complete procedure of building one of these wattle and daub huts.

Now this type of shelter is in Serbian called "koliba" or "koleba". The word means "hut, cottage, cabin". The word is also found in all Slavic languages with the same meaning "hut, shack, hovel". It is also found in Greek as "καλύβα" (kalýva), in Romanian as "colibă", Albanian as "kolube, kalive, kolibe", Persian as "kulbe" and Turkish as "kulübe" with the same meaning "hut, shack, hovel".

This word is also found in Ancient Greek as "καλύβα" (kalýva) meaning "hut, shack, hovel, cover". This word has no known etymology in Greek. And so because of the word space time distribution, it is accepted that this word comes from the Balkans and that it has pre Greek (Pelasgian) origin. The Greeks then adopted it and passed it on to Slavs, Albanians, Turks...

The full meaning of the word "koliba" is "a shelter made from stakes (and covered by debris or hides or canvas or...)"

In my post "Kolac - Golac" I talked about the Serbian word for stake, stick "kol, kolj" and the fact that its root is probably the word "gol" meaning "naked, bare, stripped of (leaves and branches)", which is the way you make stakes, sticks from saplings. This word has cognates in all Slavic languages. But also in Gaelic where we find:

The problem with this etymology is that in Serbian we also have these two words:

All these Serbian words point at the common root meaning "hole, pit, lair, den, shelter, place where you can hide and sleep".

Have a look again at a primitive debris shelter. Do you see how it looks like a "hole, pit, lair, den, shelter, place where you can hide and sleep"? 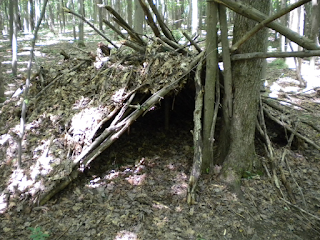 And have a look at the traditional Slavic semi sunken house known as "zemunica". This one is a reconstruction of a house found in a Slavic settlement Březno, which was discovered in Bohemia , north-west of Prague and was dated to Prague archaeological culture (VI-VII centuries). 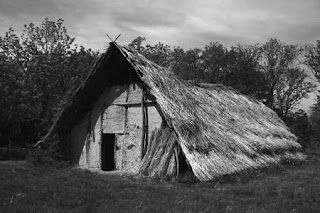 This is a cross section of one of these houses 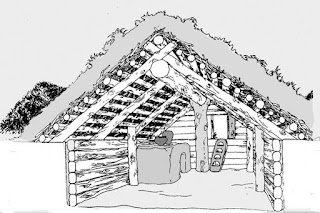 Do you see the similarity of these primitive houses with the primitive debris huts and with animal lairs, dens? They all look like holes you crawl into to take shelter and sleep...

Now in Slavic languages "I sleep" is "Ja spa". Is it possible then that "izba (jazba, jstwa)" meaning "room", "jazbina" meaning "lair, den" and "jazva" meaning "hole, pit, wound" all come from "ja spa" meaning "I sleep, where I sleep"?

Now we have two Slavic words:

And we have the word "koliba" which means "a shelter made from stakes (and covered by debris or hides or canvas or...)"

The word koliba is what you get when you pronounce kolje istba fast...

Do you think this holds water?

O yeah and have a look at this. In Polish, the word "koliba" also has a form "chalupa". Now compare this with the word chalet, from Swiss-French chalet "herdsman's hut, Alpine cottage" Unknown etymology, possibly from a pre-Latin language [Barnhart]...

Now remember how this word comes from the Balkan pre Greek (Pelasgian) population? Who were they and which language did they speak then?
Posted by oldeuropeanculture at 05:31