Second of August lies midway between the summer solstice and the autumn equinox. It also lies bang in the middle of the zodiac sign of Leo (July 23 to August 22 each year) which is ruled by the sun. The sun god Svetovid ascends to it's throne on the summer solstice day (21. of Jun). But the power of the sun is not at it's maximum yet. The power of the sun is the greatest on the 2nd of August. This is the hottest part of the year, the time of droughts. I talked about this in my post "Two crosses". And right there, after the day of the maximum heat, the days start getting cooler. This is why the 2nd of August, marks the end of Summer and the beginning of Autumn. In Serbia it is actually believed that it is summer until the noon and autumn from the noon onward.

This day, the 2nd of August, is in Serbia known as Ilindan (Day of Ilija the Thunderer). I wrote about this day in my post "The thundering sun god". Ilindan is one of the most important Slavas (Holy days) in Serbia. In Serbia there is a saying "Od Svetog Ilije sunce sve milije" meaning "From St Elijah the sun gets more pleasant (kinder, milder)".

But what most people don't know is that Ilindan is also one of the most important Slavas (Holy days) among Northern Albanian and Bosnian Muslims, who are almost all converted Slavs (Serbs). The Balkan Muslims call this day "Aliđun" (pronounced "Aligjun") and meaning "The day of Ali or the day of Ilija". This is the day of fairs when people from all the surrounding villages gather to celebrate together, exchange goods, arrange marriages.

What is very interesting is the Balkan Muslims have preserved the memory that this day used to be dedicated to Perun.

And this is why:

Veles, the great horned serpent, the dragon, the symbol of the heat of the sun, stole "the waters of heaven", "the celestial cows (clouds)" from Perun at the beginning of the summer. Basically this is the description of what the excessive heat of the sun does during the summer. It causes drought.

So on the 2nd of August, the day of the most intense drought, people would climb the mountain tops where they would light bonfires and pray to Perun for rain. Each family sacrificed a cockerel (which must be the same color, red is considered the most favorable). The reason why red cockerel is sacrificed to Perun is because fire cockerel was a sacred bird dedicated to Perun. I wrote about this in my post "Cockerel and lion".

And if the drought was really bad, the whole village would sacrifice a bull. Bull was another animal sacred to Perun. The reason for this is that bull is the symbol of the summer which starts on the 6th of May, in the Taurus. The bull literally brings the summer heat between its horns. This is why killing of the bull on the 2nd of August symbolizes killing of the summer summer heat. It represents the end of the summer.

The most interesting thing that shows the link between Perun and the bull is a special type of bull fights that are organized in Bosnia on the first Sunday in August. 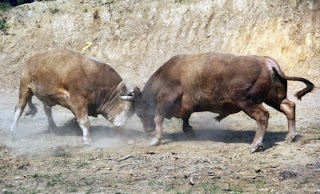 I wrote about these bull fights in my post "Bo - Vo".

In these bull fights, bulls fight bulls and the idea is to find the alpha male bull which is then used for fertilizing the cows in order to improve the stock blood line. I believe that originally these bull fights were probably part of the Ilindan (Aliđun), Perundan celebrations organized on the 2nd of August. I wouldn't be surprised that during the times of extreme droughts the winner was sacrificed to Perun as a special offering.

I believe that these bull fights come from the Serbian tradition, but they are today part of Orthodox, Muslims and Catholics tradition in Bosnia.

So the bonfires are lit, the sacrifices are made.


And every year, on the 2nd of August, Perun hears the prayers of the faithful, accepts the offerings and kills Veles. And releases the waters of heaven, the celestial cows. The clouds return to the sky and the rain starts falling...

The summer ends and the autumn begins.

Until 100 years ago people in Bosnia, Orthodox, Muslims and Catholics celebrated Ilindan (Aliđun) together...