Cantre'r Gwaelod meaning Sunken cantref (province) is a legendary ancient sunken kingdom said to have occupied a tract of fertile land lying between Ramsey Island and Bardsey Island in what is now Cardigan Bay to the west of Wales. 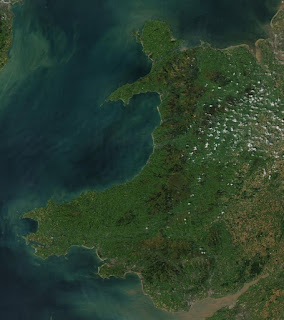 There are several versions of the legend. The earliest version appears in the Black Book of Carmarthen which dates to the 13th century. In it the land is referred to as Maes Gwyddno (English: the Plain of Gwyddno). In this version, the land was lost to floods when a well-maiden named Mererid neglected her duties and allowed the well to overflow.

It is interesting that a very similar story is also found in "Historical and descriptive notices of the city of Cork and its vicinity" first published in 1839 by John Windele. On Pages 42-43 we can read this:

A short distance to the south west, from the City, is Lough na famog, (probably the Lough Ere of the Hajiology,) now called the Lough of Cork, a considerable sheet of water supplied by streams from the adjoining hills; the high road runs along its eastern shore, and the other sides are skirted by grounds, unhappily without tree or shrub, to add a feature of beauty or interest to the picture. It is the scene of one of CROKER'S charming Fairy Legends, detailing the bursting forth of the lake, through the negligence of the princess Fioruisge (Irish: Fior-uisge - spring water), daughter of King Corc. In taking water from the charmed fountain, she forgot to close the mouth of the well, and the court, the gardens, the King, and his people, were buried beneath the flowing waters.

The incident is common to almost every lake in Ireland.

Six centuries ago, Cambrensis had a similar legend concerning Lough Neagh, which Hollinshed has repeated in a less diffusive style. "There was," he says, "in old time, where the pool now standeth, vicious and beastlie inhabitants. At which time was there an old saw in everie man his mouth, that as soon as a well there springing, (which for the superstitious reverence they bare it, was continuallie covered and signed,) were left open and unsigned, so soone would so much water gush out of that well, as would forthwith overwhelme the whole territorie. It happened at length, that an old trot came thither to fetch water, and hearing her childe whine, she ran with might and maine to dandle her babe, forgetting the observance of the superstitious order tofore used: But as she was returning backe, to have covered the spring, the land was so farre overflown, as that it past hir helpe; and shortly after, she, hir suckling, and all those that were within the whole territorie, were drowned; and this seemeth to carie more likelihood with it, because the fishers in a cleare sunnie daie, see the steeples and other piles plainlie and distinctlie in the water."

In the 1846 edition of The Topographical Dictionary of Wales, Samuel Lewis described a feature of stone walls and causeways beneath the shallow waters of Cardigan Bay. Lewis took the view that considering that the Ptolemy maps marked the coastline of Cardigan Bay in the same location as it appears in modern times, the flood described in the legend must have occurred before the second century AD.

Modern historians however rejected the legend as a fantasy.

But few years ago, ferocious winter storms stripped thousands of tons of sand from beaches in Cardigan Bay. What was revealed was a huge prehistoric forest, hundreds of oaks that died more than 4,500 years ago when they stopped growing and were then submerged under the surface of the Cardigan Bay. This ancient forest, named "the forest of Borth", once stretched for miles on boggy land between Borth and Ynyslas. Then something happened, the climate changed, the sea lever rose and the whole area disappeared under a thick layer of peat and sand and the ancient forest disappeared from view. 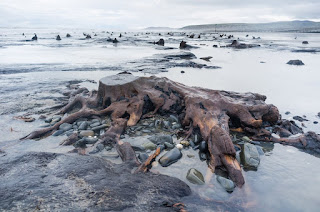 What is interesting is that archaeologists also found a timber walkway made from short lengths of coppiced branches, held in place with upright posts. It has been dated to between 3,100 and 4,000 years old, built as the local people found ways to cope with living in an increasingly waterlogged environment. Human and animal footprints were also found preserved in the hardened top layer of peat, along with scatterings of burnt stones from ancient hearths.

So people who lived in the forest of Borth, and who witnessed it's submergence under the waves of the Cardigan Bay, continued to live in the area. They must have passed the account of this event from generation to generation until eventually it came to us as a legend about the submerging of the Maes Gwyddno (the Plain of Gwyddno).

What is interesting is that the destruction of the forest of Borth happened at the same time when the Irish bog oaks found in the area of the above mentioned Lough Neagh, stopped growing because they were suddenly submerged in water for 10 years.... The I wrote about this in my post "Partholon and the great flood". In that article I talked about a very strange correlation between the Irish myths and legends talking about the great floods of the mid 3rd millennium BC, and the actual dendochronological data from the same period...I concluded that the Irish myths about the great flood of Partholon are probably real histories, memories of the real catastrophic weather even which hit Ireland during the period 2354 BC and 2345 BC.

And we now see that Wales was also hit by the same event. Dendochronoligical data obtained from the tree stumps found in the Cardigan Bay seems to match the dendochronological data from Lough Neagh.

Did Welsh people, just like the Irish, manage to preserve the memory of the "great flood" and pass it on to us across 4500 years? Or did some past great winter storms reveal the remains of "the forest of Borth" to the amazed and bewildered medieval witnesses only to cover them again, triggering human imagination and eventually giving us the legend about the submerging of Cantre'r Gwaelod?

I just thought of something. The Laigin people from Ireland at one stage controlled Llyn peninsula. I wonder if this is how we find almost identical "let the tap running" explanation for the legend in both Ireland and Wales?

In "The Lleyn peninsula : It's history, literature & antiquities" we read that "...practically every lake in Wales has some story or other connected with it. The story about the lake Glasfryn is very interesting. The story says that in the olden times there was a well where the lake is now, and this well, kept by a maiden named "Grassi," was called "Grace's Well." Over the well was a door, presumablv a trapdoor, which Grassi used to open when people wanted water, and shut immediately afterwards. One day Grassi forgot to shut the door, and the water overflowed and formed a lake. For her carelessness Grassi was turned into a swan, and her ghost is still said to haunt Glasfryn House and Cal-Ladi. This little lake is now the home and breeding-place of countless swans..."

This is almost identical to the legend about the Lough from Cork. So it is quite possible that the Laigin are the link here...

We also find similar legend in Brittany. It says that once there was a city called Ys that was built on land reclaimed from the sea. It was a rich place, famed for its beautiful gardens. One night Princess Dahut, under the influence of wine, mistakenly opened the sluices and the city was submerged.

Finally I have to ask this question: who was this "princess" or "maiden" who is blamed for the "great flood"? Cold this be the Old Mother Earth, the Mother Goddess, who controlled the waters, like "Baba", the hag from Slavic mythology did? Wells were considered holy to her, an the well water was called  "živa voda", living water. If the Earth is the Mother Goddess, then the well water is her menstrual blood, the living water indeed... And the flood that destroyed all these ancient cities could have been an actual flood caused by a catastrophic climate change...Like the flood of Partholon described in the old Irish Annals and recorded in bog oaks... This is a very interesting theme to explore....