St Gall and the bear

Saint Gall, Gallen, or Gallus (c. 550 – c. 646) according to hagiographic tradition was a disciple and one of the traditional twelve companions of Saint Columbanus on his mission from Ireland to the continent. Saint Deicolus is called an older brother of Gall.

The most popular story about St Gall says that once he was travelling in the woods of what is now Switzerland. One evening he was sitting down warming his hands at a fire. A bear emerged from the woods and charged. The holy man rebuked the bear, so awed by his presence it stopped its attack and slunk off to the trees. There it gathered firewood before returning to share the heat of the fire with St Gall. The legend says that for the rest of his days St Gall was followed around by his companion the bear.

Here are two miniatures depicting St Gall. On one he is walking with the bear and on the other one he is praying with the bear. The illustrations are from "Pontifical-Missal of the St. Gallen" which was made in 1555. 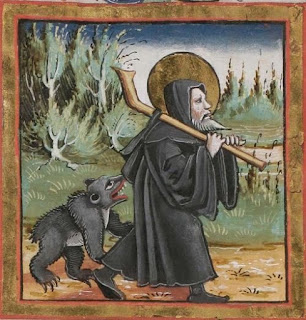 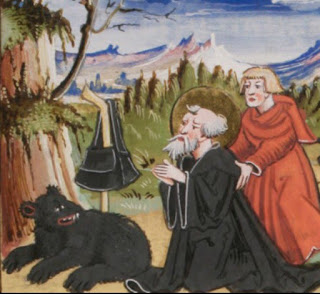 On both pictures there is a strange brownish circular object just behind his head made to look like a halo. The object looks very very very much like bodhrán, the Irish drum.

Bodhrán is one of the most basic of drums and as such it is similar to the frame drums distributed widely across the world. It has been suggested that the origin of the instrument may be the skin trays used for separating chaff, in baking, as a food server, and for storing food or tools. They are very similar to tambourines which are basically these drums with cymbals. In Ireland they are today played with a single drumstick called cipin. 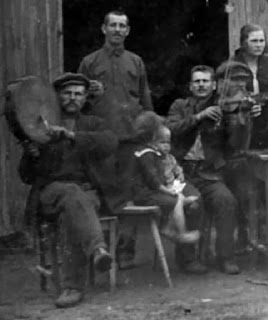 But is this halo like thingy behind St Gallen's head a bodhran or some other drum very similar to bodhran?

Well bodhrans were apparently once played using fingers just like tambourine or daf drum. This is a daf drum. :) 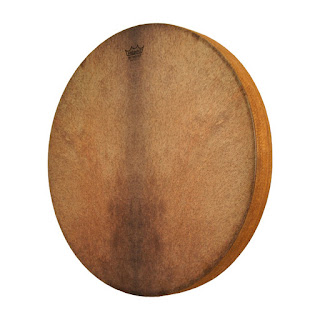 The daf is a large Persian frame drum used in popular and classical music. The frame is usually made of hardwood with many metal ringlets attached, and the membrane is usually goatskin. The earliest evidence of the Dap (Daf) dates back to Sassanid Iran. The Pahlavi (an ancient Iranian language) name of the daf is dap. The word daf is therefore the Arabicized form of the word dap. Some pictures of dap have been found in paintings that date before the Common Era. The presence of Iranian dap in the reliefs of Behistun suggests the daf existed before the rise of Islam. Dafs were part of religious music in Iran much before Sufism. Iranian music has always been a spiritual tool. It shows that dafs played an important role in Mazdean Iran emerging as an important element during the Sassanian times. 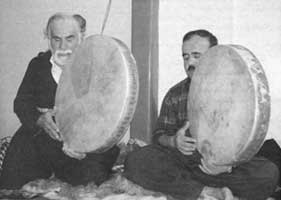 Now these types of drums were also favorite drums of the Gypsi dancing bear trainers from Eastern Europe. They would play the drum (tambourine) and sing while the bear would dance to the rhythm of their song. I remember these guys from the streets of Serbia from the time when I was a kid. 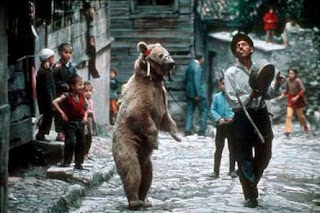 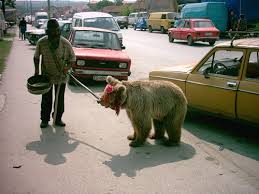 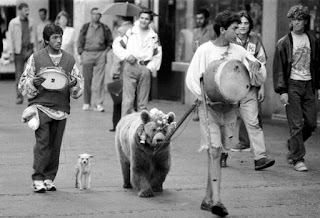 The Gypsy bear trainers belong to a special caste called the Ursari (generally read as "bear leaders" or "bear handlers"; from the Romanian "urs", meaning "bear". They are also known as Richinara, Mechkari. They are known to have existed during the population's transit through the Byzantine Empire, as early as the 12th century, when they are mentioned in connection with the Athinganoi (Roma people) by Theodore Balsamon.

Here are some historical images of ursari with bodhran like drums: 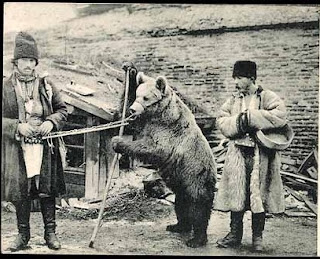 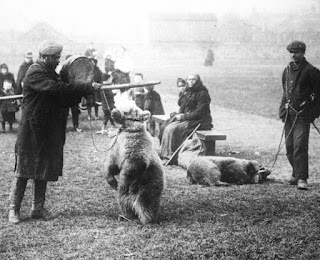 As I already mentioned Gypsies arrived to the Balkans in 12th century. By 16th century Gypsies already lived in all parts of Europe. 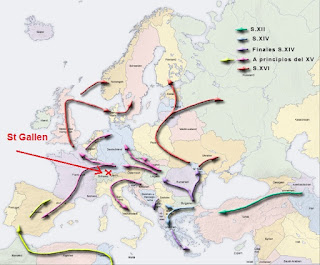 Now here is something interesting.

Here is an early 19th century depiction of Gypsy dancing bear trainers from the area of Hesse in Germany. They have a monkey, and the player is playing flute and a drum. 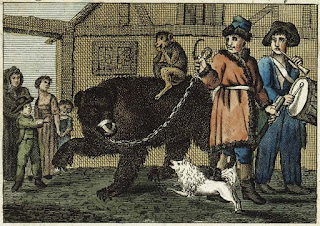 Here is an illustration from "Roman d'Alexandre", Flemish manuscript dated to 1338-44 written in French. It illustrates legends of Alexander the Great. The scene also has a dancing bear and its trainer, a musician playing flute and a drum and a monkey. 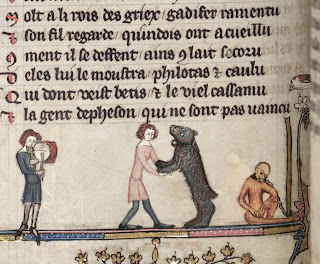 I was also told that there is an even earlier depiction of this scene from 12th century French manuscript. The illustration can be seen in Romanesque Manuscripts - The Twelth Century Vol. 1, P. 159 (Nr. 157), by Walter Cahn. Unfortunately I don't have this book. I will be grateful if anyone has a link to this image so that I can add it to this post.

Was there the same tradition  of dancing bear trainers in Europe before the arrival of the Gypsies?

Or were these early images of the dancing bear trainers based on "exotic" images from other parts of the world, like the Middle East or the Balkans and not on commonly seen scenes from Western Europe? After all it was the time of the Crusades, which coincided with the arrival of the Gypsies into Europe.

Or did some of the Crusaders bring the exotic entertainers back with them to Europe as a show off?

Or is it that these images are the earliest records of the wandering Gypsy entertainers in western Europe? We have all seen, from the last refugee crises, that it doesn't take 300 years to walk from the Balkans to France? It takes few weeks. So if the first Gypsies did arrive to Balkans in the 12th century, chances are some of them went straight on further into Europe. Balkans was at that time full of the Western European crusaders, who mostly walked there. The inward migrants only start getting noticed when the number of migrants suddenly increase. Which is what happened in the 15th century, when Otomans finally took over the Balkans. So one or two small bands of street entertainers with dancing bears and monkeys would definitely not have been recorded in any official history. But they might have been noticed and recorded as a curio. Which is what these early depictions of bear trainers from Western European manuscripts could be...

What do you think?
Posted by oldeuropeanculture at 07:16