I recently came across this article on the UCD Digital Library:


The bed outshot was a common feature of houses in north-west Ulster and north-west Connaught, consisting of an alcove in the back wall of the house beside the hearth. The purpose of this small extension to the house was to provide additional sleeping accommodation and it was often occupied by elderly people. A common name for the outshot was the cailleach, which according to folk etymology derives from "cúil theach" (the back of the house).

Here is a picture of an Irish  cailleach, a bed built into the wall next to the hearth, oven. 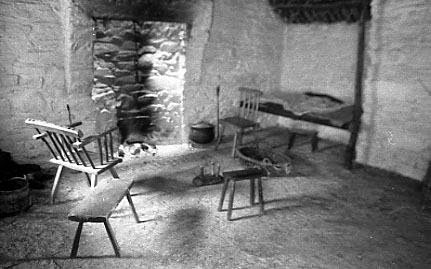 Here an old person who may be bed bound or in need of heat would be near the hearth and could take part in the storytelling and gossip. A curtain could be closed across to give some privacy.

In MacBain's Dictionary we find this meaning for word cailleach : old wife, nun, Old Irish caillech, "veiled one"; from caille, veil, which is from the Latin pallium, cloak, English pall. 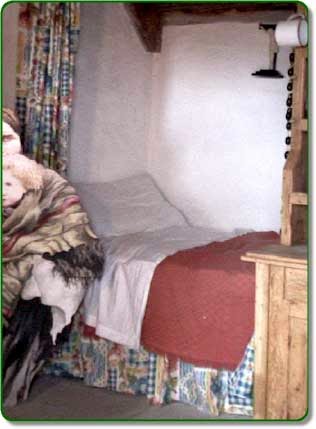 Exactly the same architectural feature exists in Serbia. It is called "zapećak". Word "peć" means oven, and word "za" means behind, so "zapećak" literally means behind the oven. In old houses, beds were always build next to the ovens, because walls surrounding the oven would heat up and radiate heat through the night. What is interesting is that these kinds of ovens are in Serbia called "kaljeve peći". The meaning of the word "kalj" is "mud", dirt, black which would make word "kaljeve" mean made of mud, dirt. These ovens are indeed made from clay, mud, bricks and stone. Here you can see some examples of mud and stone ovens from northern Serbia.

These are outside versions of these mud ovens: 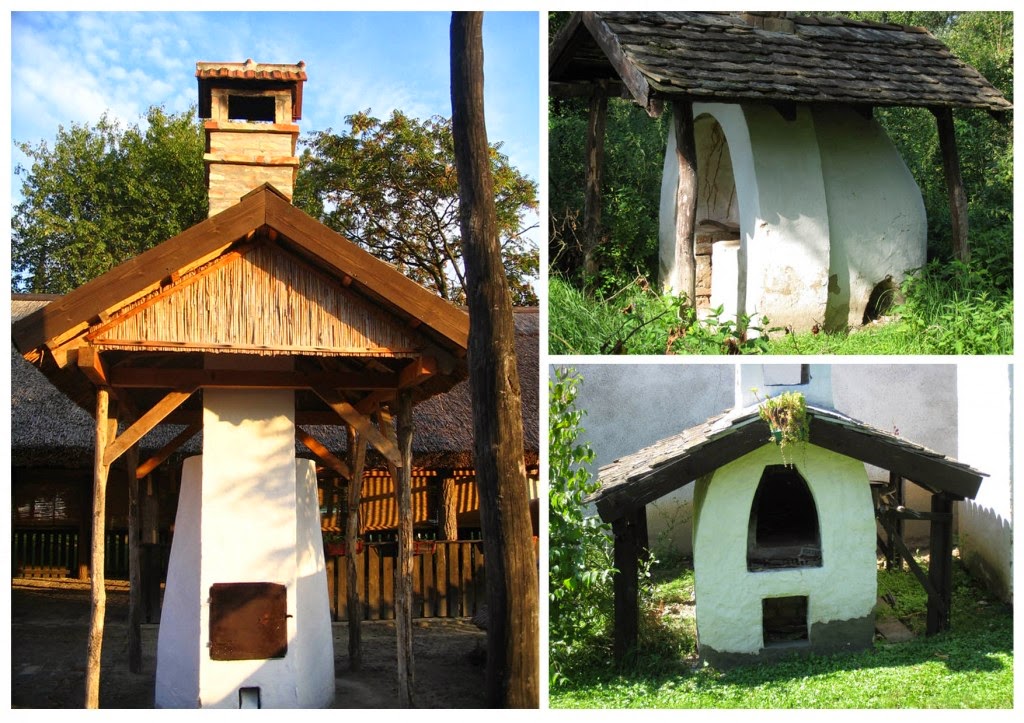 These are indoor versions of these ovens with "zapećak", place beside the oven for sitting and lying. 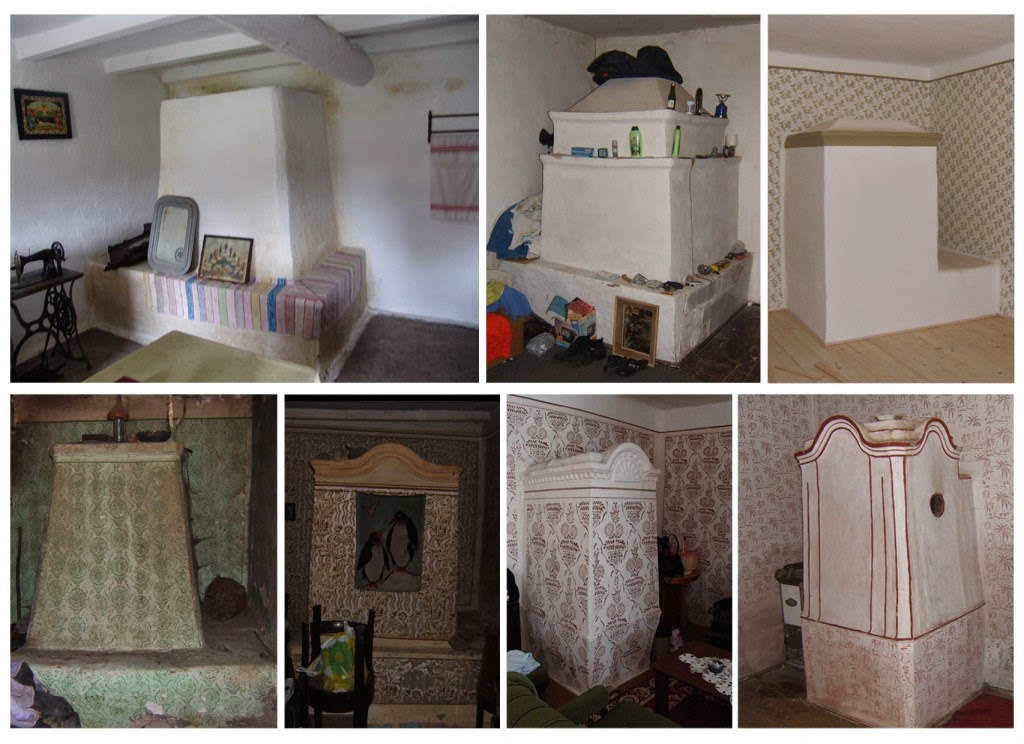 In Slovenia zapeček is more like a bench round the stove. People also slept on those benches or on top of the oven. This one is from a town house: 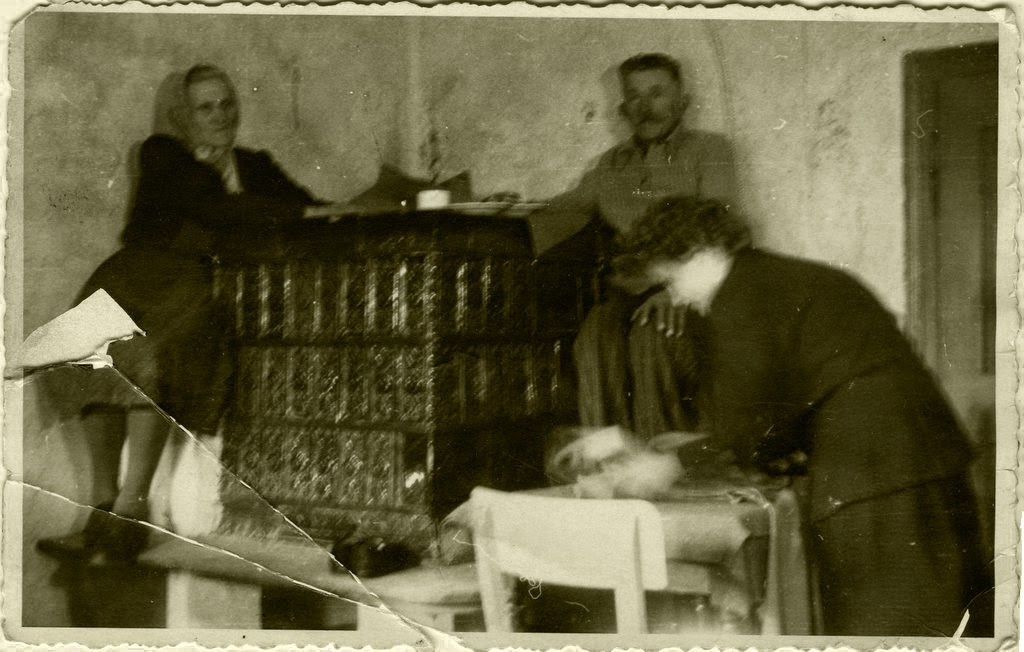 This one is from a village cottage: 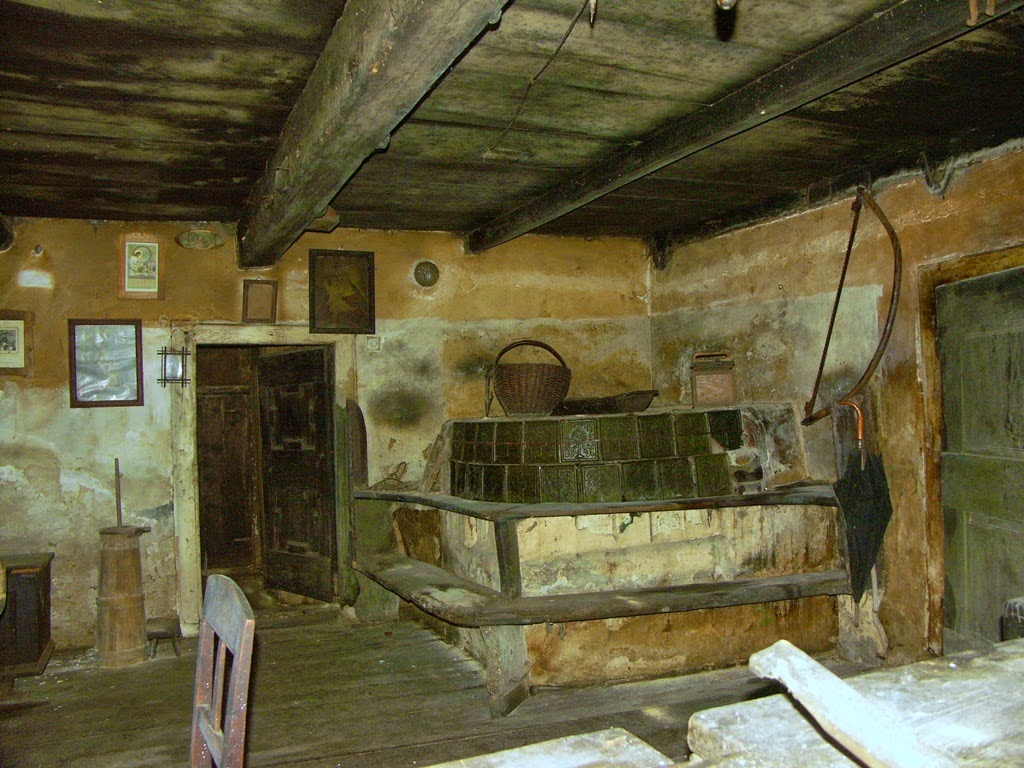 These types of mud brick ovens are even more prevalent in north Slavic lands of Russia and Belorussia, where every cottage had one, with beds actually built on top of the oven or right next to it. The picture below shows an old Russian stove inside the coachman’s cottage with the little wooden ladder leading to a bed space over it. As this was probably the warmest spot in the cottage it would normally have been reserved for elderly parents to sleep on. 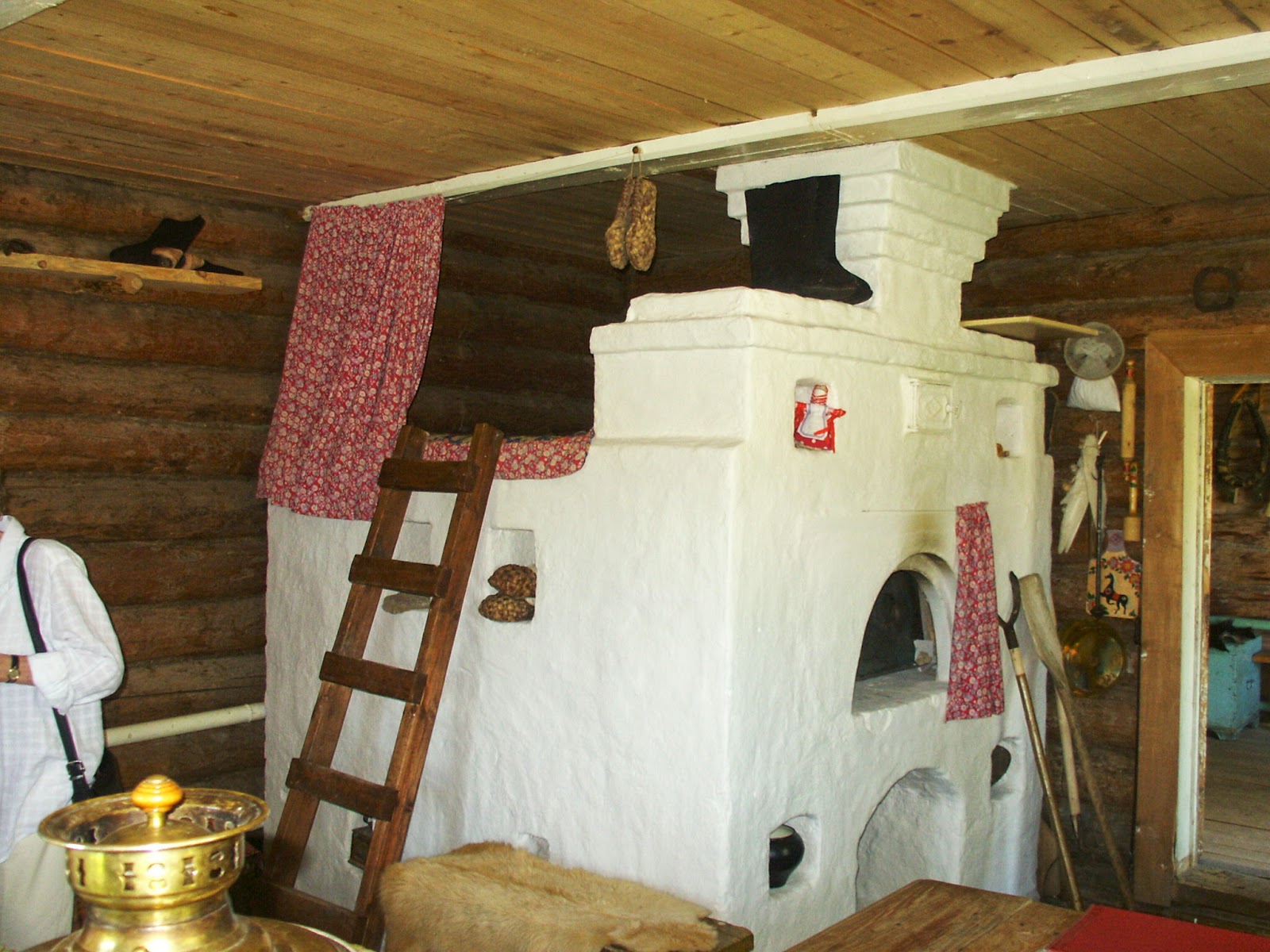 Here is another one from a peasant house in Russia: 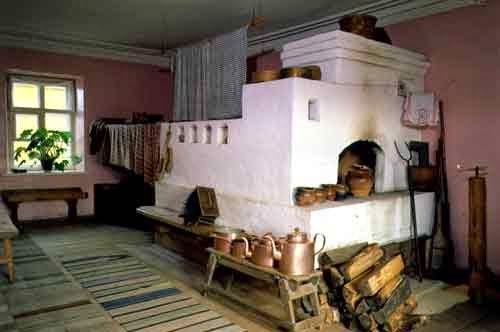 These next two "kaljeve peći", mud brick ovens are from Belorussia. Belarusians built piečy similar to those in Russia. There was a place on pieč for children and elderly called 'čarień' . There was a bench near stove and a bed next to the stove (polati). 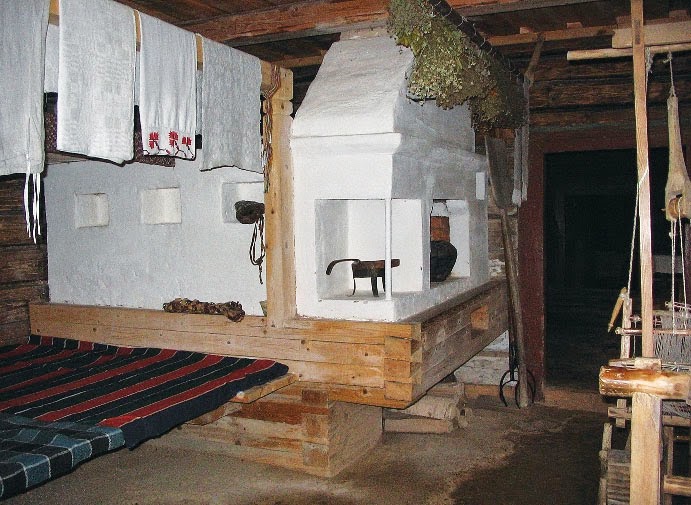 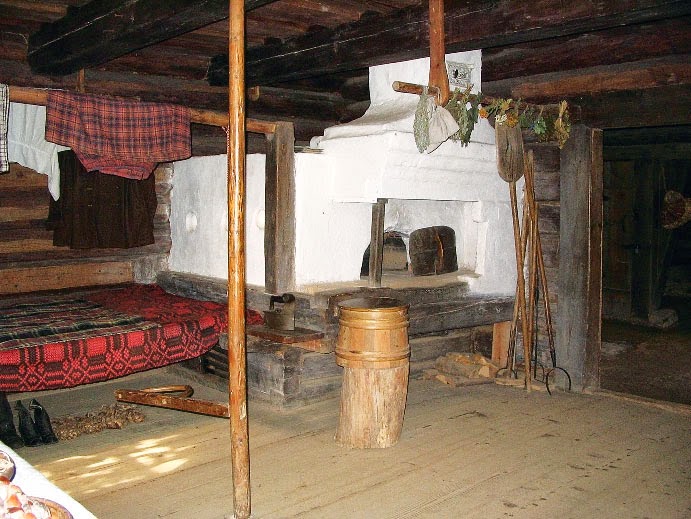 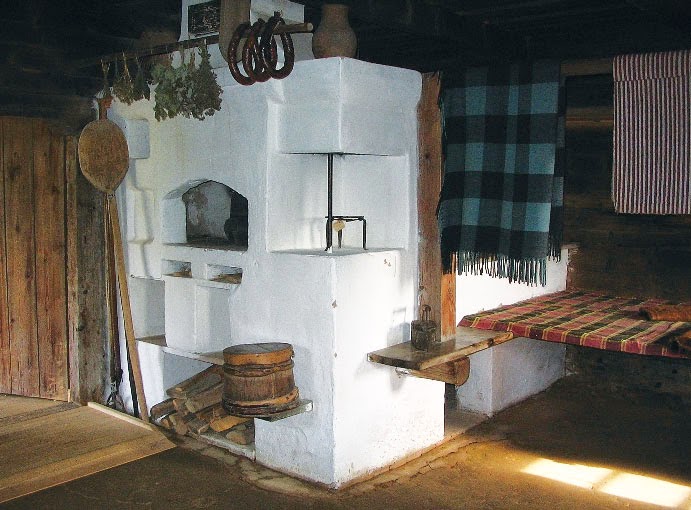 Why did Slavs build ovens made from mud and stone? Because they are the most efficient heaters in the world.

The so-called “Russian stove” , a masonry heater was one of the main features of the Russian home. Throughout many centuries Russian stoves were used both for cooking meals, baking bread and pies, drying grains, mushrooms, and roots and for heating and drying the house in winter and autumn. If the stove had no chimney, which was often the case, the smoke from the straw or manure that was burned as fuel would fill the interior of the room. Houses did exist with chimneys, the interiors of which were much cleaner and healthier for the inhabitants.The Russian stove often turned into a folk personage, which can be found, in particular, in folk tales. Many positive characters of Russian fairy tales are fond sitting or lying on the stove.

Many years later the Russian stove is still very popular and it is considered as the most efficient and environment-friendly wood burner. It can be made by stone, brick, stucco or tile-clad units and is designed to burn the wood quickly at temperatures up to 2000F.

Masonry heaters can burn from 15 lb. to 90 lb. of wood in an hour and a half, which could be all that's needed for a day's worth of heat. The heat from the fire works its way through a series of internal channels that help to transfer the heat to the masonry. The stove slowly generates heat into the living space over a long period of time - as long as 24 hours. During the coldest days of winter could require only two fires and typically burns at around 95% efficiency. With a masonry heater, you can expect to heat a well-designed 3000-sq-ft home with as little as five cords of wood for the entire heating season. Masonry heaters are focal point of the room and bring warmth and beauty during the long, cold days. Here is the picture showing the internal design of one of these mud brick ovens: 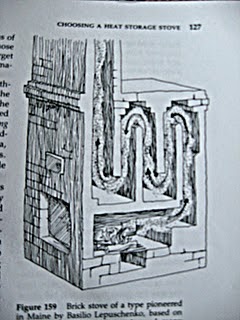 I have already spoken extensively about potential South Baltic and even East Slavic influence in Ulster in my articles about Baba stones and Gavran and Golub ban. It is very interesting that the only place in Ireland where we find high concentration of these "Cailleach" beds built into the wall next to the hearth, is in the old Ulster, the same area where we find majority of the other South Baltic, "Slavic" cultural traits. I was told recently that some of these "Cailleach" beds were also found in Co. Meath, Wexford and Waterford. These are also counties where we have significant "Germanic" and "Slavic" non Gaelic cultural traits linked to the Laigin and later the Danish - Slavic Vikings.

Is this another proof of the existence of "two Irelands" in early medieval times? The Irish annals actually talk about two Irelands.

When did this cultural trait enter Ireland?

If this cultural feature came with Cruithin, do we find the same types of beds built into the ovens or hearths in other Cruithin areas of Scotland?

If this cultural feature came with Anglo Saxons and their Slavic allies, do we find these types of beds built into the ovens or hearths in Britain?

If this cultural feature came with the Vikings and their Slavic allies, do we find this feature in houses in Viking settlements? Most typical medieval Slavic houses sunken houses dug into the ground and had stone or mud brick oven built into the corner of the house. People probably slept on benches next to the oven. This architectural features are in Germany and Baltic region used to identify Slavic settlements among Germanic and Norse ones. Germanic and Norse houses from the same era had central hearths. Some of the earliest Viking houses from Ireland have exactly this design. Were Slavic Vikings among the first Danish Vikings to reach East of Ireland? Or did these "kaljeve peći", mud brick ovens, come later with Norvegian - Swedish - Russian Varangians?

This is an example of an early Medieval Slavic sunken house with a mud and stone corner oven. This design leaves space next to the oven for a sleeping platform, bench. The house in the picture is built from timber, but the same type of houses were also built from wattle and daub with timber support posts and from stone. 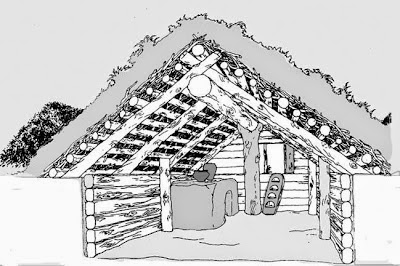 So in the end let me ask the main questions:

Is it time to reexamine archaeological data from Ireland and see how many other "Slavic" cultural traits can be found? No one looked for them before, because officially Slavs never set foot in Ireland. But maybe we should reevaluate the official history.

Did Slavs together with Norse Vikings, Anglo Saxons, Prussians, Celts, Gaels... contribute to the ethno and cultural genesis of the Irish?

The last question is:

In Northern Ireland, beds built at the side of the hearth or stove are called "cailleach". Is this because of the old ladies who used to lie on these beds, or is the word "cailleach" the closest Irish word that sounded like Slavic "kaljeva peć", "kaljava peć" meaning oven made from mud bricks?

Irish word "cailleach" means an old woman. The Old woman is the main ancestral figure of the past. She is the mother goddess, the earth goddess. But when she turns nasty, like during catastrophic climatic events of the mid 3rd millennium bc, which wiped out irish agricultural society, this makes old grandmother turn to a hag, witch. Goddess of fertility, land, crops, becomes goddess of cold, water, mud, muck, hunger, death. As rain falls day after day, for years, and as fields turn to bogs, you end up with Cailleach goddess of kalj, mud, blackness, darkness, witch with a dark veil which obscures the sun...

So Cailleach is an old woman but not any old women. She is the old witch, the hag. You would never call any Irish woman Cailleach to her face as it is an insult. Cailleach is the natures destroying principle. She is the equivalent of Serbian Mora, the goddess of death, cold, water, winter. In Serbian she is known as Mora but also as Baba Mara, Baba Marta, meaning Grandmother Mara, Hag Mara, Hag Death. But also she became replaced with Grandmother Mary, holy Mary. No wonder Cailleach, the name for a veiled old witch, the goddess of winter, cold, rain, water, death became the name for new christian witches, nuns...Name Mora, Morana is based on the root "mor". This root is found in most Serbian words with diminishing, reducing, negative meaning. But is also root for the word mort meaning death which could be traced to common Proto-Indo-European root *mr̥twós, *mr̥tós.
Cailleach fits the description of the old witch, the goddess of death, cold, rain, mud, bogs, peat, dead forests and tree stumps, destroyed crops and hunger... 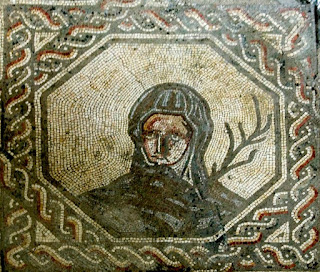 Is there any link here?

But I actually believe that the root for the word Cailleach is the Slavic word kal, kalj meaning black, mock, mud. This is actually an ancient Arian (R1a) word and is much older than both the Serbs and the Irish. It is interesting that the root is preserved in Slavic, Hindi, Nepali, Gujarati, Punjabi, Romani, Sanskrit and in Irish as a name for goddess of cold, death, darkness...This word is also the root of the name of the goddess of death Kali. This word is also the root for the word coal which is black and Slavic ugalj meaning coal...First coal was produced from wood by turning it "u + galj" meaning into black, into charcoal...

So actually in a strange way "Cailleach", the goddess of death, cold, darkness and "Kaljav" meaning black, muddy could mean one and the same thing. Cailleach = Kalj (j)e = dark, black, mud + is.

But this is a big story which requires a separate post.
Posted by oldeuropeanculture at 15:39