In Irish we have a word "colm" which means pigeon, dove. Official etymology of this word is that it comes from Middle Irish "colum", from Old Irish "columb", from Latin "columbus", from Ancient Greek "κόλυμβος" kolumbos.

In Serbian we have a word golub which means pigeon. Official etymology of this word is that it comes form proto Slavic golǫbь, of unknown origin. Possibly related to Latin columba, columbus.

I would like here to propose an alternative etymology for these two words from Irish and Serbian language.

Serbian word "golub" is direct cognate of old Irish word "colum(b)". The difference is only in the pronunciation of the interchangeable undifferentiated consonant groups kghj and pvbmf.

Let me explain what I mean.

Originally all sounds were undifferentiated, as human ability to speak developed. There was no m,p,b,v,f there was something like mpbvf which is basically undifferentiated sound which is the root sound of the above consonant group. The whole group is produced by the same gross mouth position. The differentiated sounds are produced by tiny variation of lip position and pressure. As people developed their speech abilities, as they used speech more and more, their genes changed, enabling them to control their speech apparatus more and more precisely. This lead to sound differentiation, and  mpbvf turned first to diphthongs, like bv, mp, pf and then to individual sound m,p,b,v,f. And because these sounds are so close together, tiniest change in our ability to hear them and to pronounce them will lead to additional sound changes which can then be propagated to the rest of the family and clan...

As babies learn how to speak they start by using undifferentiated sounds, they bubble. As they developed their speech abilities, as they use speech more and more, their control of their speech apparatus becomes more and more precise. This lead to sound differentiation. What used to be bhfabhfa is now baba.

These are undifferentiated sound groups:

Vowels can change through these undifferentiated sound groups:

Consonants can change through these undifferentiated sound groups:

So depending on pronunciation "golub" can become "colum(b)" through transformation of g --> c and b --> m(b). This means that these two words are effectively one and the same and both come from the same undifferentiated root (kgh)olu(mpbv).

Latin columba meaning dove and columbus meaning pigeon, are actually based on the root word "(c)golu(m)b" with "a" ending added for feminine dove and "us" ending added for masculine pigeon. Official etymology is that this word is derived from Ancient Greek κόλυμβος. However word κόλυμβος, kolumbos means “a diver”, from κολυμβάω (kolumbao, “dive, plunge headlong, swim”). If you look at Old Greek dictionaries you will see that this word is never applied to pigeon.

Aristophanes [Birds, 304] lists various birds one of them is pigeon and another one was diver. This is the excerpt in question:


Epops, Pointing to the various species:

Here is the magpie, the turtle-dove, the swallow, the horned-owl, the buzzard, the pigeon, the falcon, the ring-dove, the cuckoo, the red-foot, the red-cap, the purple-cap, the kestrel, the diver, the ousel, the osprey, the woodpecker . . .

Old Greek dictionary gives us this list of pigeon words. κόλυμβος, kolumbos is not one of them:

The result is the same for dove words. κόλυμβος, kolumbos is not one of them:

So Latin words columbus, columba could not be derived from old Greek κόλυμβος.

If we look at Evroasian languages, we see that the only language groups in which word for pigeon is (c)golu(m)b are Slavic and Gaelic - Gallic languages groups.

Gaelic, Welsh, Cornish, Breton all use version of "colum".

It is very interesting that word for pigeon, brakes the P Celtic - Q Celtic transformation rule of C transforming to P.

Apart from Slavic, Gaelic and Gallic languages, these languages also have a word based on the root (c)golu(m)b:

Compare this with Germanic words for pigeon, dove:

Apparent root for all the above words is apparently "Proto-Indo-European *dʰeubʰ- (“to whisk, smoke, be obscure”)" which is frankly very unlikely. The real root is probably something like Proto-Germanic *dūbǭ (“dove”). Please compare this with the word for pigeon, dove from the most westerly Slavic languge, Polabian: ďölǫb. We see how here Slavic, Gallic, Gaelic golub becomes dolQb. This word sits between Slavic golub and Germanic dūbǭ. This is one example of the linguistic Slavic - Germanic continuum with Polabian language being the link which shows how languages mixed.

Common pigeon or wood pigeon is common to all of Europe.

It is the same for European dove:

This is probably the oldest onomatopoeic name for pigeon, dove. "gugu" - a bird that says "gu". If we look at Sanskrit we find these words for pigeon, dove: kokathu, kaukkuTika, kokadeva, ghughukRt...

So where does the word "golub" come from?

Pigeons and Doves are monogamous, they mate for life. Their courting includes head-bobbing, coo-ing and "kissing". So pigeons and doves are birds which kiss, which are in love. 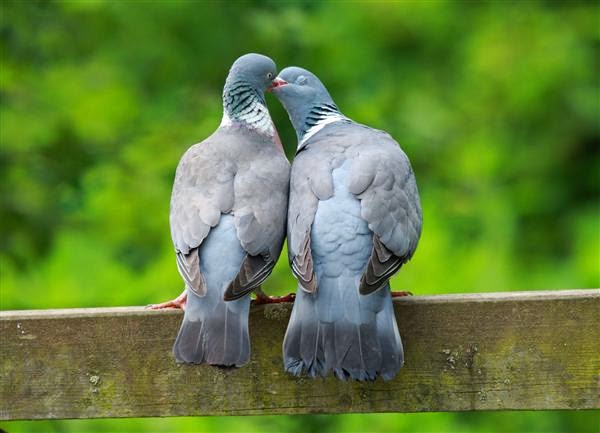 If we look at Indoeuropean dictionary we find this word root: *lewbʰ- to love, to desire. We find that all "derived" words, mean desire, praise, love, have sex.

What is interesting is that only in Serbian, Croatian, Bosnian, Slovenian, in Western Balkan Slavic languages, the word "lub", "ljub" also means kiss. This is the root of the word "ljubav" meaning love which we find in other Slavic languages. ljubav = ljub + bav = kiss + do, perform. It literally means "doing kissing". The word "ljub" is actually an onomatopoeic word.  It actually describes the act of kissing. You can only produce sound "lj" by sticking your tong out. So "lj" means sticking tong out. Sound "u" means in, into, putting into. So sound "u" means putting tong into. Sounds "b,p,m" are sounds made by smacking your lips, like when sucking. Sound "mama", "baba", "papa" are all made by babies when they are looking for breast to suck, to put into their mouth. So sound "b" means mouth, suck.

All together "ljub" literally means: stick tong out, put it into someones mouth and then suck it = kiss. When you say "ljub", you are actually going through all the mouth movement involved in kissing. Try it.

These are main meanings of word "ljub" in Serbian:

In wiktionary you can find that Latin word Columba means dove, but also is a "term of endearment". In Serbian Golub, Golubica are also terms of endearment. And you can see why. Golub = go + ljub = it, him, her + love.


So where does the word golub come from?

Is this the origin of word Golub? And if so, is old Irish Colum(b) come from Golub and is Latin Columba, Columbus derived from Golub or its derivation Colum(b)? And if this is the case, how old is word Golub? And why is it that again we find that Slavic, Gaelic and Gallic languages seem to be in the same group, even though they are supposed to belong to different distant branches of Indoeuropean language?

There is actually good reason to suspect that "kissing bird" is the actual etymology for word golub. I have written in my post about bran, vran, that word gavran, govran meaning raven can be broken into gav, gov + vran = speaking + blac, crow. This is a perfect description of a raven, as it is the only European talking bird. Golub, bird that kisses is a perfect description of a pigeon, dove, as they are the only European kissing birds.


What does this mean for our St Columban? I wrote in my last post that his name means white dove. Columban = Colum + ban = pigeon + white. His name stay Irish and is not Latin. Which is in keeping with what we find when we look at the list of early Irish saints. All of them have Irish names. So Columban being derived from Latin would have been a glaring exception impossible to explain.

So Columban is an Irish name, but Irish name with root in some old Balkan language, which is preserved in Western South Slavic languages, Serbian, Croatian, Bosnian, Slovenian...

More and more questions...
Posted by oldeuropeanculture at 15:14