How easy or difficult is it for a single person to change people's culture? 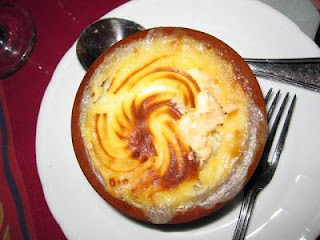 Umm Ali is a famous Egyptian dessert. When well prepared, is one of the best - and more calorific - desserts you will ever feast on. Puff pastry, pistachios, almonds, pine nuts, condensed milk (or just full fat milk with cream) all cooked to a golden crisp in the oven. When the golden crisp is broken, it reveals lots of other melt-in-your-mouth yummy stuff added inside that forms a sweet bread-pudding-like milky mush.

The name "Umm Ali" means "Mother of Ali" in Arabic. The true origin of the Umm Ali dessert is unknown. In Cairo, you may hear it is from Upper Egypt, while in Upper Egypt you may here that it is from Cairo.

But believe it or not, the origin of this dessert could actually be Ireland.

One of the legends relating the origin of this dessert says that the name Umm Ali comes from O'Malley. Mss O'Malley was an Irish nurse. She was in Egypt and caught the eye of the ruler, Khedive Ismail (Isma'il Pasha), who was the ruller of Egypt in the 19th century.

Ismail was in love with all things European. So he fell in love with Mss O'Malley too. She became his mistress and made a bread and butter pudding for him, which he loved so much, that it became his favourite dessert. He asked his cooks to learn how to make it and told them that the name was O'Malley dessert. The dessert was served at the court, and from there spread through Egyptian upper classes who as it is always the case tried to imitate the court. The poor people then tried to imitate the rich people and soon everyone in Egypt was eating O'Malley dessert.

The Egyptian people quickly transliterated the name into the closest Arabic thing that made sense to them, which was Umm Ali - the mother of Ali. They also then invented stories which served the purpose of explaining the strange name of the dessert.

The first sory tells us that the first Mameluke (mercenary) to be made a Sultan of Egypt was al-Muizz Izz-ad-Din Aybak. Mamelukes were slaves bought as children and trained to be loyal soldiers. It was a practice started by the Abassid Caliphate (the third caliphate in the Islamic empire following the death of the Prophet Mohammad). He was married to an unnamed woman with whom he had a son called Ali, hence her name: Mother of Ali. He also had another wife and son. Women at the time were not allowed to rule the country, but in the absence of a Sultan, a mother could be the guardian to her son until he came of age to take over the Sultan title. In this case, Aybak died leaving the two women to fight out whose son would rule. Umm Ali hatched a plan with the handmaid of the second wife, and had her killed. To celebrate her victory, she made this sweet dessert (akin to sweet revenge) to share with everyone.

The second legend is a bit more believable. A Sultan was down in the Nile Valley hunting with some people when he suddenly became very hungry. He stopped into a small village asking for food. The villagers asked Umm Ali to prepare something for him, as she was known to be the best cook in the village. She whipped up this dessert and the Sultan loved it so much, he came back for seconds.

This is a great example how cultures and languages can be greatly affected by a small number of well-placed people. It also shows that historical linguistics has to be a multidisciplinary study if it wants to be successful in discovering root meanings of words. It also gives a great example of linguistic absorption by closest transliteration. This is a process in which foreign names, particularly toponimes, hidronimes, get transliterated to the closest thing that makes sense in the language of the population living in the area. What happened in Ireland with Gaelic toponyms and hydronyms after the arrival of the English is a great example of this process. The same goes for Serbian toponyms and hydronyms in Kosovo and Albania after Albanians took over old Serbian territories.

Anyway, enough science, back to sweets.

Here is one way to make O'Malley (Umm Ali) bread and butter pudding:

* 6 sheets of filo (or puff pastry, pancakes, or bread)

Keep the sheets of filo in a pile, covered with a damp towel to keep them from drying out. Brush each one with melted butter and place them on top of each other on a buttered baking sheet.

But the buttered filo sheets in a preheated 3500F oven for about 10 minutes, until they are crisp and the top ones are slightly colored.

When cool enough to handle, crush the pastry with your hands into pieces into a baking dish, sprinkling the nuts and raisins between the layers.

Bring the milk and cream to a boil in a pan with the sugar and pour over the pastry. Sprinkle, if you like, with the cinnamon and return to the oven. Raise the heat to 4250F and bake for about 20-30 minutes, until slightly golden.

Enjoy your Umm Ali, or to be more precise O’Malley :)
Posted by oldeuropeanculture at 17:47