This is Tibetan plateau, a vast elevated plateau in Central Asia and East Asia, covering most of the Tibet Autonomous Region and Qinghai in western China, as well as part of Ladakh in Jammu and Kashmir, India. 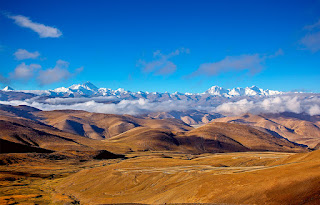 It stretches approximately 1,000 kilometres (620 mi) north to south and 2,500 kilometres (1,600 mi) east to west. With an average elevation exceeding 4,500 metres (14,800 ft), the Tibetan Plateau is sometimes called "the Roof of the World" because it stands over 3 miles (4.8 km) above sea level and is surrounded by imposing mountain ranges that harbor the world's two highest summits, Mount Everest and K2, and is the world's highest and largest plateau, with an area of 2,500,000 square kilometres (970,000 sq mi). 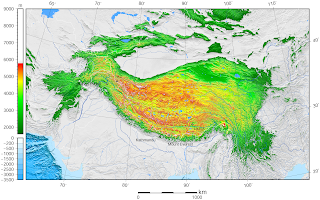 The plateau is the home to Tibetan people and Sherpa people. 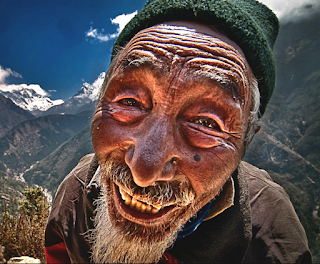 And these people have a very interesting legend. The legend of Yeti. In the folklore of Tibetan plateau, the Yeti or Abominable Snowman is an ape-like creature, taller than an average human, that is said to inhabit the Himalayan region of Nepal, Bhutan, and Tibet. The legend says that during the snow storms Yeti comes down from the mountains to the villages and steals local women. The legend of Yeti was widely publicised by the western explorers who not only believed in it but also contributed to it by stories of encounters with Yeti during their expeditions.

The scientific community has generally regarded the Yeti as a legend, given the lack of evidence of its existence. Recently, a genetic study was undertaken during which all the artefacts found throughout the region which were attributed to Yeti (bones, claws, hair) were analysed. The DNA from the samples was matched with Himalayan, Tibetan and Eurasian brown bears and Asian black bears DNA. Based on these results, the researchers concluded that the belief in Yetis has its roots in biological facts and is based on human encounters with bears that still live in the region today. The researchers also concluded that the existence of a large hairy ape like creature in the Himalayan-Tibetan region is indeed a myth which has no base in reality.

And this is where the story of Yeti would have ended. If it wasn't for the strange DNA of the people from Tibetan plateau. Both Tibetan and Sherpa populations are genetically most similar to each other and then to other modern East Asian and Central Asian populations. However there is something very interesting about people from the Tibetan plateau. After modern Oceanic populations, modern Tibetan populations show the highest rate of allele sharing with archaic hominins at over 6%. Modern Tibetans show genetic affinities to three archaic populations: Denisovans, Neanderthals, and an unidentified archaic population. Once scientists started looking closely at these archaic DNA sequences, they discovered something very very interesting.

Researchers have long wondered how Tibetans live and work at altitudes above 4000 meters, where the limited supply of oxygen makes most people sick. Other high-altitude people, such as Andean highlanders, have adapted to such thin air by adding more oxygen-carrying hemoglobin to their blood. But Tibetans have adapted by having less hemoglobin in their blood; scientists think this trait helps them avoid serious problems, such as clots and strokes caused when the blood thickens with more hemoglobin-laden red blood cells.

In 2010 geneticists discovered that Tibetans have several genes that help them use smaller amounts of oxygen efficiently, allowing them to deliver enough of it to their limbs while exercising at high altitude. Most notable is a version of a gene called EPAS1, which regulates the body’s production of hemoglobin. These genes are not found in any other human population outside of Tibetan plateau.

Since this gene was discovered the scientists wandered where it came from. And then in 2014, while looking through the genes found in Denisovans DNA, they spotted EPAS1. The mystery was solved. The "superathlete" gene, which helps Sherpas and other Tibetans breathe easily at high altitudes was inherited from Denisovans, one of the archaic human species now extinct.

But this is not the biggest problem that this genetic discovery poses.

Within Tibetan mythology, the origins of Tibetans are said to be rooted in the marriage of the monkey Pha Trelgen Changchup Sempa and rock ogress Ma Drag Sinmo. 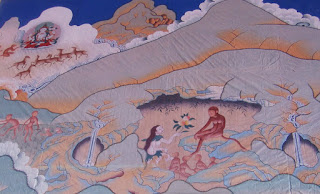 This very popular Tibetan creation myth holds that in the beginning the world was covered by water, which evaporated little by little, leaving room for animal life. To the flooded land of Tibet came a monkey that had withdrawn there to immerse himself in meditation and to follow a life of asceticism and chastity. He settled on Mount Gongori. One day, while he sat in meditation, a female demon came to seduce him. She threatened that if he refused to sleep with her she would visit a demon and conceive a multitude of small monsters that would destroy all living creatures. The wise monkey yielded and married her. A few months later six small monkeys were born of their union. The monkey let his six children grow up in the forest, but three years later he discovered that they had become five hundred. The fruits of the forest were no longer sufficient to feed them, and the five hundred monkeys beseeched their father to help them find food. Not knowing what to do, he went to ask help from Avalokiteśvara the god of compassion. Then Avalokiteśvara went on the mount Meru where he gathered a handful of barley, and offered it to the monkey father. Then the monkey father learned agriculture and, after a good harvest, could finally feed all his children. As they fed on the cereals, the monkeys gradually lost their hair and their tails. They also started to use bone and stone implements, then made clothes and built houses, forming a civilization from which the Tibetan people descended.

Remember the legend about Yeti. Yeti was a huge hairy ape like creature which came down from the mountains and stole women from the villages. Presumably to mate with them...

The Tibetan origin myth is the exact opposite of the the Yeti legend. It is a legend about the hairy mountain monkey who was seduced by a white female demon who came up to the mountain and who wanted to mate with him...

And here is the question: Are these Tibetan plateau legends about mating between humans and huge, smart hairy apes from the mountains memories of the actual mixing between the modern humans who arrived to the Tibetan plateau and Denisovans who they found there?

No, that is not possible, I can hear people say. That mixing occurred at some stage between 14,000 and 40,000 years ago. No memory can survive that long...

Well...Remember my post "Dreamtime"? In it I talked about the fact that we now have proof that some Australian Aboriginal legends are actual histories which are over 45,000 years old...

So it is actually quite possible that these Tibetan plateau legends are also histories which have been preserved as legends for tens of thousands of years.

But why am I talking about the legend of Yeti in the blog about Old European Culture? Well how old are European legends???


PS: Well it turns out that recent archaeological discoveries prove that modern humans did actually arrive to Tibet right on time to first intermix with Denisovans, acquiring the high altitude gene and then exterminate them.

The Nwya Devu Paleolithic site discovered by this team confirms that human ancestors set foot on the Qinghai-Tibet Plateau at elevations approaching 5,000 meters above sea level around 30,000-40,000 years ago. It is the first Paleolithic archaeological site discovered in Tibet that preserves intact stratigraphy allowing age-dating of the site’s antiquity. Nwya Devu is located in the Changthang region of northern Tibet, about 300 km northwest of Lhasa, the capital of Tibet Autonomous Region, at about 4,600 meters above sea level.