The Vinča culture, also known as Turdaș culture or Turdaș–Vinča culture, is a Neolithic archaeological culture dated to the period 5700–4500 BC. It occupied a region of Southeastern Europe (i.e. the Balkans) corresponding mainly to modern-day Serbia (with Kosovo), but also parts of Romania, Bulgaria, Bosnia, Montenegro, Republic of Macedonia, and Greece. 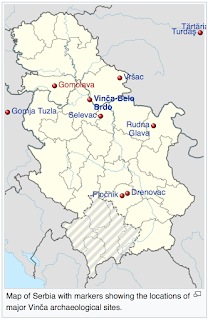 The culture was named for its main site, Vinča-Belo Brdo, a large tell settlement located near Vinča a suburb of Belgrade, Serbia, which was discovered by Serbian archaeologist Miloje Vasić in 1908.

Current consensus is that Vinča culture is an offshoot of the preceding Starčevo culture which belonged to the First Temperate Neolithic (FTN) archaeological horizon, consisting of the earliest archaeological cultures of Neolithic Southeastern Europe, dated to c. 6400–5100 BCE. The cultures of the FTN were the first to practice agriculture in temperate Europe, which required significant innovations in farming technology previously adapted to a mediterranean climate. People from Starčevo culture built the first agricultural temple in Blagotin, Serbia.

Farming technology first introduced to the region during the First Temperate Neolithic was developed further by the Vinča culture, fuelling a population boom and producing some of the largest settlements in prehistoric Europe. These settlements maintained a high degree of cultural uniformity through the long-distance exchange of ritual items, but were probably not politically unified. Various styles of zoomorphic and anthropomorphic figurines are hallmarks of the culture. 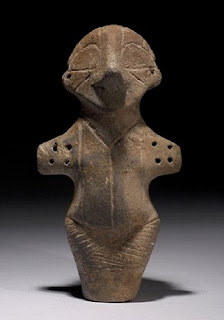 As are the Vinča symbols, which some conjecture to be the earliest form of proto-writing. 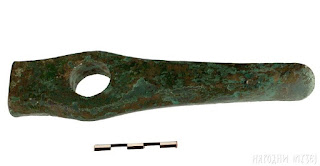 However it seems that the people of the Vinča culture practised only an early and limited form of metallurgy and most functional tools continued to be made from chipped stone, bone and antler.

As I already said, the Vinča culture main site was Belo Brdo (white hill), a large tell settlement located near Vinča a suburb of Belgrade, Serbia. It was, with the surface area of 29 hectares and the population of 2500, by far the biggest Neolithic settlement in Europe. The earliest deposits at Belo Brdo date to around 5700 BCE and belong to the Early Neolithic Starčevo culture. After that Belo Brdo was occupied by people of the Vinča culture. Whether there was a break in habitation on the site is difficult to say as Starčevo layer was severely disturbed by the Vinča people. A total of thirteen building horizons from this period make up the majority of the tell's stratigraphy, as new buildings were constructed on the debris left by periodic fires. The settlement was abandoned by 4900 BCE, some five centuries before the wider collapse of the Vinča culture.

In the Early Vinča phase Belo Brdo seems to have developed into a ritual centre for the entire region, the manufacturing centre for the production of ritual objects. The raw material for these objects often had to be imported from considerable distance, indicating also that from its earliest phase the site was part of large-scale exchange networks. It is therefore thought that Belo Brdo was a key place in a wider Vinča prestige economy, and an abundance of ritual paraphernalia, especially anthropomorphic figurines, is characteristic of the site.

Many ritual objects first appeared there and then spread to other Vinča sites. And many of these Vinča culture ritual objects are later found in many other cultures throughout Eurasia and North Africa.

Like for instance Mother and Child ritual scene which was found throughout Vinča culture territory in the 5th millennium BCE.

Among many figurines found on Belo Brdo archaeological site, this next one caught my eye few days ago. 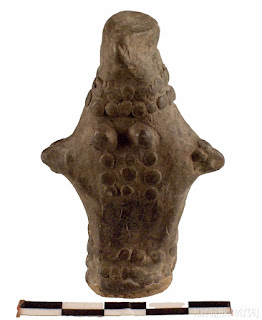 While I was looking at this strange object, I couldn't stop thinking that I have seen it before. It took me a while to figure out where, but I finally remembered.

In Ephesus, a principal city of Greek Asia Minor, a great temple was built in honour of Artemis, which became one of the "Seven Wonders of the Ancient World". There Artemis was worshiped mainly as a fertility goddess, and was identified with Cybele the mother goddess of eastern lands. The cult statues of the Ephesian Artemis show her standing erect with numerous large oval things on her chest. There have been many theories as to what they represent. Some say they are breasts, others that they are bulls testes which were sacrificed to her. So the true interpretation remains uncertain, we can say that each represents fertility. There is also another possibility, that these oval objects are eggs which are also symbol of fertility and more importantly of rebirth. 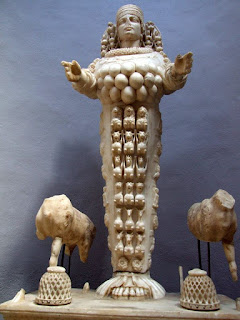 The statue of Artemis from Asia Minor looks strikingly similar to the above Vinča culture figurine. And the fact that the Vinča culture statue has bird face, makes the hypothesis that the oval objects are indeed eggs. And not just any eggs. Partridge eggs.

Partridge and its eggs were symbol of fertility in Europe and probably Western Asia before chickens were brought from East Asia. I wrote about the symbolic link between partridge and the female fertility (both human and earth fertility) preserved in the Balkans in my post "Partridge".

But regardless of what the oval objects represent, testicles or eggs, how crazy is the similarity between these two statues? I know how much time passed between these two statues, but still...We know that there are striking similarities between ceramic objects found in Vinča culture sites and in early layers of Troy I. Before the advent of radiocarbon dating it was thought, on the basis of typological similarities, that Vinča and other Neolithic cultures belonging to the "Dark Burnished Ware" complex were the product of migrations from Anatolia to the Balkans. This had to be reassessed in light of radiocarbon dates which showed that the Dark Burnished Ware complex in the Balkans appeared at least a millennium before Troy I. Interestingly no one proposed that Troy I could have been a result of the eastward migration from the Balkans??? And Troy was in Anatolia, Asia Minor, where we find the above intriguing Artemis with eggs statue which is so strikingly similar to the Vinča bird goddess with eggs figurine...

But maybe here we don't see direct cultural link, but the same concept represented in the same way in two cultures separated by thousands of miles and millenniums...Who knows...