This is Croagh Patrick, the holy mountain of Ireland. This 764 metres mountain is located in County Mayo, 8 kilometres from Westport, above the villages of Murrisk and Lecanvey.


There is a pilgrimage route running from Ballintober Abbey to the summit of Croagh Patrick. 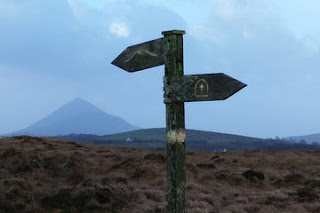 Originally it was the processional road that went from Rathcroghan (Irish: Ráth Cruachan), the seat of the Kings and Queens of Connacht, to Cruachan Aille, as Croagh Patrick was called in Pre-Christian times. Cruachan Aille was at that time the holy mountain of Crom Dubh, old Irish Solar and Agricultural deity. I wrote about Crom Dubh in the article "How old is Crom Dubh" and in many other posts.

After St Patrick defeated Crom Dubh and Christianized his holy mountain Cruachan Aille, the mountain was renamed to Croagh Patrick, Patrick's mountain. The old pre-Christian ceremonial road leading to the holy mountain became Christian pilgrimage route and over time it became known as Tóchar Phádraig or St Patrick’s Causeway. But interestingly, even today, the time of the year when Christian pilgrims walk the Tóchar Phádraig and climb Croagh Patrick, the last Sunday in July, is still called "Domhnach Crom Dubh" which means "Crom Dubh's Sunday"...

The Tóchar Phádraig is dotted with holy places such as holy stones, holy wells, chapels and churches.

The most unusual, and the most important holy place found along Tóchar Phádraig is the so called Boheh Stone, an outcrop of bedrock from which there is a full view of Croagh Patrick. 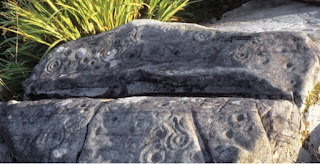 The stone is covered in cup and ring marks, and is the only known example in Connaught, and one of the finest examples of neolithic rock art in Ireland and Britain. Official archaeology believes that the stone had been carved as early as 3800 BC.

Official archaeology "does not know the meaning of the markings found on this stone"...

What is very interesting is that on two days in the year, the 18th of April and the 24th of August, the setting sun, when viewed from this spot, touches the summit of the Mountain, then proceeds to 'roll' down the northern slope. The angle of the Mountain's side matches the declination (setting angle) of the sun at this time and place.

This "rolling sun" phenomenon was rediscovered in 1989–92 by Gerry Bracken.

The extraordinary phenomenon of the rolling sun down the slope of Croagh Patrick was perfectly captured in this animated gif made from still images by one of my favorite Irish photographers, Ken Williams.

You can see a very good video of the event here on YouTube.

Interestingly, the dates on which the rolling sun phenomenon can be observed from the Boheh stone, together with the winter solstice divide the year into three equal parts.

Now remember my post "Rebirth"? In it I talked about the megalithic "tomb", known as the Giant’s Grave, which is situated in the valley of Loch an Dúin on the eastern side of the Conor Pass. Now this "tomb" has a cup and ring mark carved into the large stone near the head of the "tomb". And this cup and ring mark is illuminated twice a year, on the days of spring and autumn equinoxes...I suggested that the cup and ring mark represents the solar year, sun and it's endless cycle of life death and rebirth.

Now that is interesting. Because there are hundreds of these cup and ring marks carved into the stone which served as a solar observatory from which the amazing rolling sun phenomenon was observed, twice a year...

So is it possible that it was the people of Partholon who carved these cup and ring marks into the Boheh stone, some time during the mid 3rd millennium BC? During their "less than 300 years" in Ireland? Well that would put Boheh stone into exactly the same period into which Giant’s Grave from Kerry was placed, 4500 years ago...The arrival of the Beaker people and metallurgy into Ireland...

If this is indeed why and when the cup and ring marks were carved into the Boheh stone, this makes Boheh stone even more important...

Either way, there is no doubt that the symbol is a solar symbol.

So what do you think about all this?
Posted by oldeuropeanculture at 11:33