It is very interesting is that in Serbian the words for knee, shin (bone), ankle all come from the same "kln, gln" root:

Basically we have two angles, knee (koleno, goleno) and ankle (gležanj) both made by the same bone shin bone (golijen, golin, goujeno, koljeno) and the bones connecting to it, all having names coming from the same root. And I believe that this root is "gol" meaning "naked".

Well have a look at these pictures: 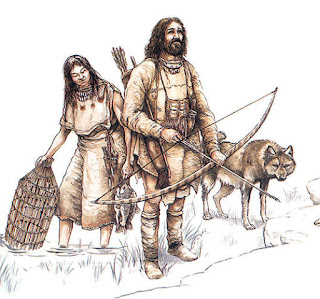 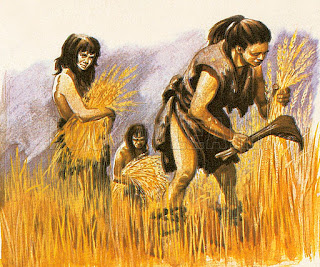 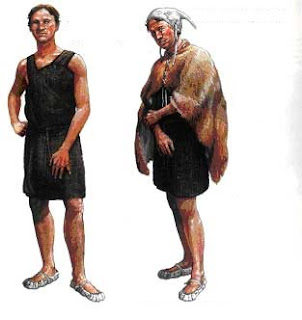 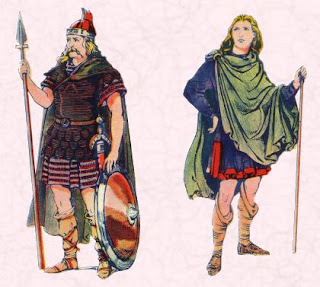 Basically during all this time, when our languages were developing, the working and fighting clothes remained the same length: they ended somewhere around the knees. There is a purely practical reason for this. A tunic or a kilt of that length allows full range of movement while providing enough cover to keep the body worm. Anything longer and you will not be able to spread your legs and walk normally or bend. Anything shorter and your balls will shrink from the cold :)

The part of the leg which was uncovered, naked (goljen in South Slavic languages) is exactly the part from knee (koleno, goleno in Serbian) to ankle (g(o)ležanj in Serbian) which are connected by the same bone, shin bone, (golijen, golin, goujeno, koljeno in Serbian), all the words based on the root "gol" meaning naked.

"According to Sobolevski this word comes from prehistoric clothing without sleeves and legs. This is indicated by the fact that the word goljen means naked, bare"

Now if the word "gol" meaning naked is indeed the root of the word "goleno, koleno" meaing knee, then this raises an interesting question.

Well actually, the Proto Slavic word "gol" (naked) comes from Proto-Indo-European *galw- (*kalw- ) meaning naked, bare. There are words in Indoiranian, Baltic, Slavic, Italic and Germanic languages based on this root. But not in Celtic...So where does the Gaelic word for knee come from? Slavic languages? Germanic languages? Latin? However only in Slavic languages the words for the bare, naked parts of the leg from knee (koleno, goleno in Serbian) to ankle (g(o)ležanj in Serbian) are based on the root "gol" meaning bare, naked. So...

What do you think?