On the Wiki page "History of roads in Ireland" we can read that according to an entry in the Annals of the Four Masters for AD 123, there were five principal highways (Irish: slighe) leading to Tara (Irish: Teamhair) in Early Medieval Ireland. The entry in the Annals claims that these routes were 'discovered' at the birth of Conn of the Hundred Battles:

"The night of Conn's birth were discovered five principal roads leading to Teamhair, which were never observed till then. These are their names: Slighe Asail, Slighe Midhluachra, Slighe Cualann, Slighe Mhór, Slighe Dala. Slighe Mhór is that called Eiscir Riada, i.e. the division line of Ireland into two parts, between Conn and Eoghan Mór."

In reality, the ancient road system (such as it was - there cannot have been a developed national system) fanned out not from Tara but from Dublin.

The Slighe Assail went due west towards Lough Owel in Co. Westmeath, then to Cruachain. The Slighe Midluachra went towards Slane, through the Moyry Pass north of Dundalk, round the base of Slieve Fuaid, near Newtownhamilton in Co. Armagh, to Emain Macha, ending at Dunseverick on the north coast of Co. Antrim. The Slighe Cualann ran south-east through Dublin, crossing the River Liffey via a "hurdle-ford", then went south "through the old district of Cualann, which it first entered a little north of Dublin, and from which it took its name". The Slighe Dala ran towards and through Ossory in Co. Kilkenny. Finally, the Slighe Mhór ("Great Highway") joined the Esker Riada. It then, more-or-less, followed the Esker Riada to Co. Galway.

It is believed that this "hurdle bridge" was built across the river Liffey in 1014 AD.

In "A Smaller Social History of Ancient Ireland..." which was published by Joyce, P. W. (Patrick Weston) in 1906, we can read in the section entitled "Bridges" that the place chosen for the erection of a bridge was very usually where the river had already been crossed by a ford; for, besides the convenience of retaining the previously existing roads, the point most easily fordable was in general most suitable for a bridge. There is no evidence to show that the Irish built stone bridges before the Anglo-Norman invasion. Bridges were very often built of planks laid across the stream from bank to bank if it was narrow enough, or supported on rests of natural rock or on artificial piers if the river was wide: a kind of bridge occasionally used at the present day. Sometimes bridges were constructed of strong hurdles supported on piles; like that across the Liffey which gave Dublin its old name. These timber bridges of the several kinds were extremely common, and they are frequently mentioned in old authorities.

The fact that both articles talk about the "hurdle bridge" across river Liffey, which "gave Dublin its old Gaelic name" is actually very interesting. 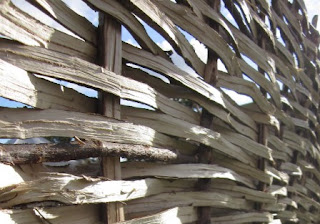 There are other towns of the same name, such as Àth Cliath in East Ayrshire, Scotland, which is Anglicised as Hurlford.

So before any permanent bridge was built, river Liffey was crossed at the ford.

The ford's exact location is a mystery today. It is proposed that it could have been somewhere near Usher's Island (when it still was an island), maybe a hundred yards west of what is now the Father Mathew Bridge, near St Paul's Church. 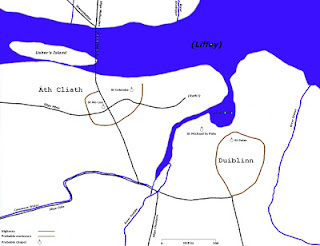 So ford is basically a river crossing. The place where you can "walk across the river".

I came across this artist's impression of the "hurdled ford": 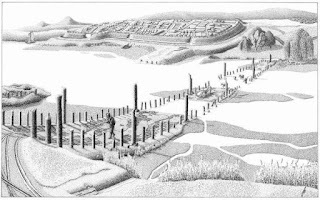 I doubt that this is actually what the "hurdle ford" looked like. This half submerged structure would not provide any benefits to the people crossing the river. They would still get wet. But there is another type of wooden structure that would fit the description of a "Àth Cliath": 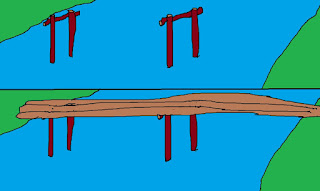 This is the type of a primitive wooden river crossing that can be seen in remote rural areas all over the world. The most primitive type consists of one or two long logs placed across the river. They are supported either by the banks alone or by the banks and wooden stakes stuck into the river bed. 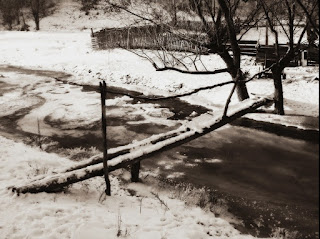 The walking surface can be made wider and more stable by nailing or tying short cross logs on top of the original two logs spanning the river. 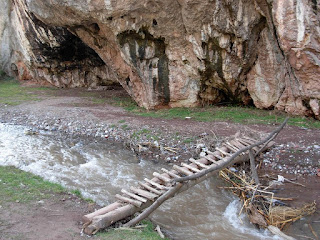 If you spread the logs spanning the river and make the cross logs wider, and add you get something like this, a narrow corduroy road bridge. 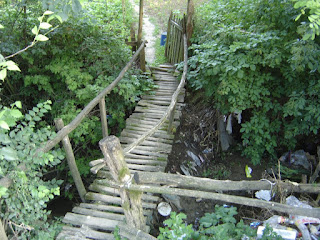 Now in my post "Togher wooden trackways" I talked about a millenniums long Irish tradition of building wooden walkways (toghers). They are basically corduroy roads and bridges built all over the country across marshes and bogs from Bronze age until Early medieval time. 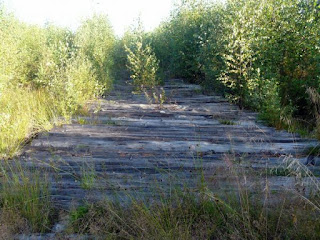 Exactly the same construction can be used, supported on parallel logs lying on stakes stuck into the river bed, to build bridges. Like this one: 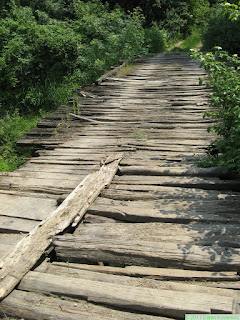 So if there ever was "Àth Cliath" across river Liffey, it probably went through these evolution steps, from a simple logs crossing to the logs bridge.

But, I can hear people saying, cliath means hurdle.

In my post "Kolac - Golac" I talked about the existence of a whole cluster of words based on the base word "cleath" meaning stick, pole.

I also talked about the fact that this cluster has its cognate, and possible root, in Slavic word "kol" meaning "stake, stick" and which comes from the word "gol" meaning "naked, bare, stripped" of leaves, branches, which is how you make sticks and stakes. I also talked about the Slavic word "klada" which means log (a tree trunk stripped of branches) and which probably comes from the same root "kol, gol".

Now if we look at the above walkways we can see that they are made from stakes (Irish cleath, Slavic kol) and logs (Slavic klada). If a Slavic person wanted to describe the walkway construction he could describe it as "koljat, koljast" (made of kolje, stakes, sticks).

That takes care of "cliath". It actually doesn't have to mean hurdle. It can mean anything made from stripped off branches, trunks (sticks, stakes, logs).

Now about the word "Àth". In Irish the word means ford, the place where you can walk across rivers. The official etymology states that this word comes from "Proto-Celtic *yātus meaning ford, from Proto-Indo-European *yeh₂- meaning ride, go". I would not agree with this. The proposed "Proto Celtic" root was never attested. The only descendant is Gaelic Àth (pronounced "oh" but which used to be pronounced "oth").

In my post "Odin the wandering deity" I talked about the Serbian word "od" meaning "walking". This Serbian word comes from Proto Slavic "xodъ" and has cognates in all Slavic languages. It also has a cognate in Ancient Greek "ὁδός" (odos), alternative "οὐδός" (oudós) – Homeric (used only once in Odyssey) meaning "way, road, path", basically something you "od", walk on.

The official etymology says that these words come from Proto-Indo-European *sodos, from *sed- (“to sit”)!!! I don't have to say how ridiculous this sounds...The root has to be preserved in Slavic "od, hod" meaning "walk, walking"...Road, path, way is what you walk on and derives its meaning from the fact that you walk on it...

Now if the Irish "Àth" meaning "ford, walkway, place where you can walk across the river" has any cognates, they have to be Slavic "od (hod)" meaning "walk, walking" and Ancient and Modern Greek "ὁδός (odos)" meaning "way, road, path".

Now knowing all this, let's have a look again at the phrase "Àth Cliath":

Interesting don't you think?
Posted by oldeuropeanculture at 15:09