In my post about Prokletija - the Cursing ceremony, I described a strange Serbian custom in which a stake was cursed and stoned in place of an unknown or missing offender. I explained that in South Slavic languages the word "klet, klijet" means curse and I wondered where could that word have come from.

I then proposed that the word "klet, kliet" could have come into Slavic languages from Irish where we find a whole cluster of words based on the base word "cleath" meaning stick, pole.

That this is indeed a possibility can be seen from the fact that in South Slavic languages the word "klet, klijet" has another meaning: wooden hut made from poles, logs, sticks. Like this one from Rudno in Serbia: 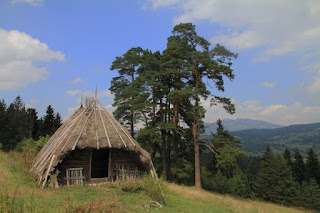 This word is also present in other Slavic languages with the same meaning. 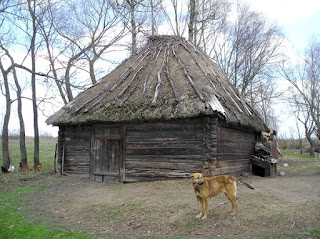 Baltic granaries are made from interwoven logs, like this Latvian klēts: 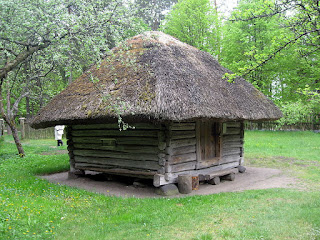 You can see that this is basically a raises log cabin. I have already written in my post "Log cabin" that this type of house construction was brought to Baltic by Slavs. So the name for these structures must also have been brought to Baltic by Slavs and that Latvian klēts, Lithuanian klė́tis, Old Prussian clenan have Slavic origin. And guess what. Before Slavs the log cabins were in central Europe built by Celts.

And in Irish, a Celtic language, we find a whole cluster of words based on the base word "cleath" meaning stick, pole.


Which means that the original name for these structures was Celtic cleathach based on the root cleath meaning a goad, a wattle, pole, stake, the building material used for making wooden shacks, both log cabins and wattle and daub ones.

Well almost. But more about this in my next post :)
Posted by oldeuropeanculture at 03:35