The oldest word in the world

What is the oldest word in the world?

Tough question. How would you even go about finding this out?

Well you can collect all the words from all living and dead languages. Analyze them, compare them and you might come up with a list of some root words common to enough distant languages that you can say: "these words are very old". But this is basically where you will hit the dead end. There is no way to progress from here to "this is the oldest word in the world".

So I decided to take different approach. Instead of looking for the oldest recorded word, I will look at what "word" is and go from there.

Word can be spoken or written. Written word is encoding of a spoken word using symbols or signs.

A spoken "word" is a sequence of sounds which is associated with some agreed meaning. It is this associated meaning that turns noise into words. You have all probably been in a situation where you were abroad, in a country whose language you didn't understand. If you even bothered listening to the people around you, all you would have heard was incomprehensible noise. And sprinkled here and there were words, parts of the noise that for you had some meaning, because in your own language that particular sequence of sounds had attached meaning. Something like this:

Say this out loud. Can you recognize any of it? This is Serbian. I deliberately removed spacing because when you are listening to foreign language that you don't understand this is how you hear it. The text in quotations means "Good day sir. How much is Coca cola?". How many of you recognized "coca cola" among the noise?

Now that we know what spoken "word" is, we need to look at how words are made. Well they are made by blowing air through our mouth while opening and closing our mouth, changing the position of our tong and squeezing and relaxing our throat and our vocal cords. On top of this we need to listen to the sounds we are making in order to plan and control the process of speaking. So in order to speak properly we need to be able to hear properly. And we have to have all the brain functions that deal with all of the muscular and sensory systems involved in speaking and with translation of ideas into language, well developed and highly tuned. This makes speaking a very very complicated thing indeed. I wrote a big article about language development on my page "Unified languages theory", so if you are interested in things like that you should have a look at it.

One of the things that we know about language development is that every new born baby has to start from scratch. Every normal human baby is born with a mouth, tongue, throat, vocal cord, ears, brain. But none of the apparatus involved in controlling these parts of the human body is developed at birth. This is why new born babies don't open their mouths to take their first breath and say "Good day sir. Nice to meet you. Stop slapping my bottom..." They open their mouths to take their first breath and howl "aaaaaaaaaaa". You can hear a very good rendition of this sound sequence in this video. 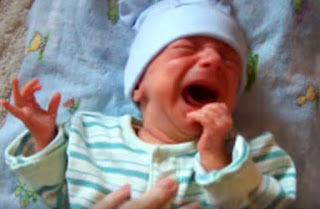 This sequence of sounds carries a meaning. It means: "I am in distress! Alert! WTF just happened!!??!!". How do we know this? Because this sequence of sounds (vowels) is accompanied by a facial expression which clearly shows distress. The idea is to attract attention of the mother. It is unconscious communication, built into us genetically. We don't have to think about it or plan it. Our emotions are automatically encoded into facial expressions and involuntary sounds. I wrote about these involuntary sounds on my page "Vowels".

But as we grow up, we continue to use these facial expressions and sounds. And the same sequence of sounds "aaaaaaa" accompanied with the same or similar facial expressions, continues to represent the same idea: "Distress! Alert!". We do this unconsciously when we are afraid, or when we are in pain or when we are grieving.  And consciously when we are shouting to alert other people to something, mostly of incoming scary thing that can cause pain and grieving. Sometimes that scary thing is us and we are alerting others that we can cause them pain and grieving...

So here we have the first sound every baby makes at birth, and it seems that this sound, or sound sequence, carries a meaning. Could this sound sequence be called a word?

I know that some people could say that this is not really a word because it has no consonants. They could also say that a shout is not a word.

But I won't argue.
Posted by oldeuropeanculture at 13:41

Email ThisBlogThis!Share to TwitterShare to FacebookShare to Pinterest
Labels: linguistics, the oldest word