This is a stone statue from Armagh, Ulster, Ireland, (pre-christian / pre- 5th c.). It represents a man with a lion's head. It was discovered and first recorded during the reconstruction of the Armagh cathedral in the late 19th century. 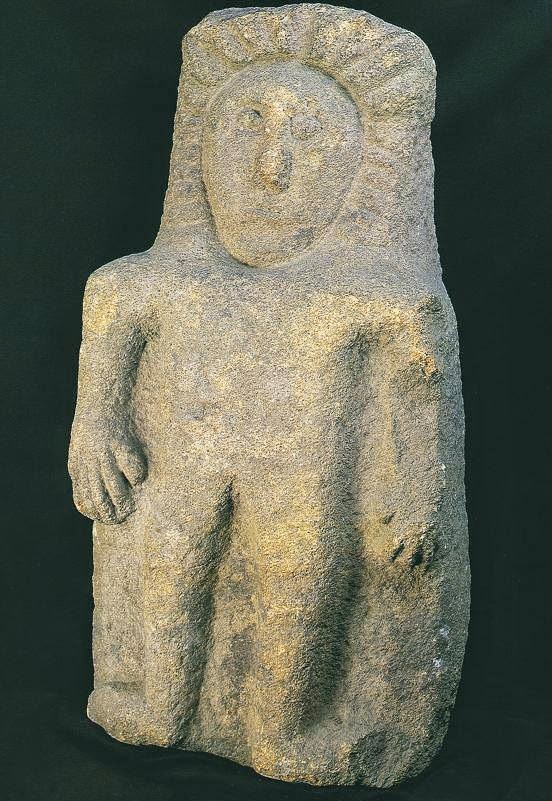 The statue is still kept inside the Armagh cathedral with other strange stone slabs and statues found in the area: 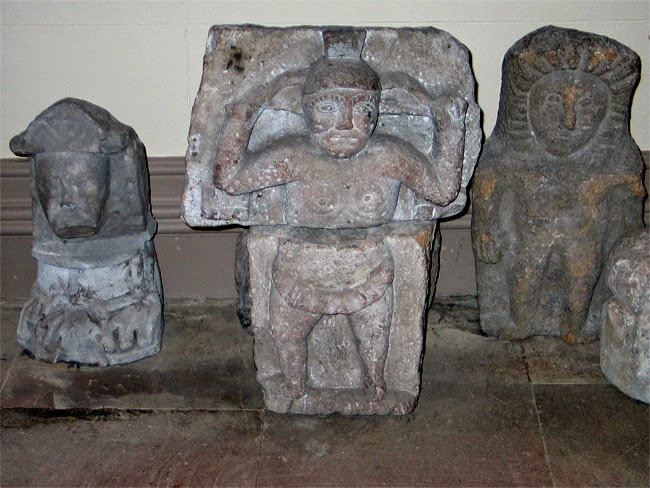 Ulster is the same place where we find the only Scythian Baba stones found in Ireland. Like this one called Tanderagee Idol which is also kept in the Armagh cathedral. 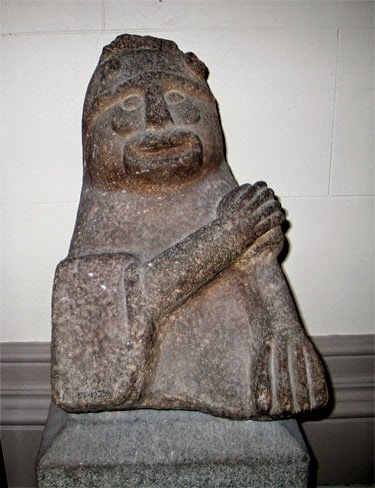 Or this one from Boa Island: 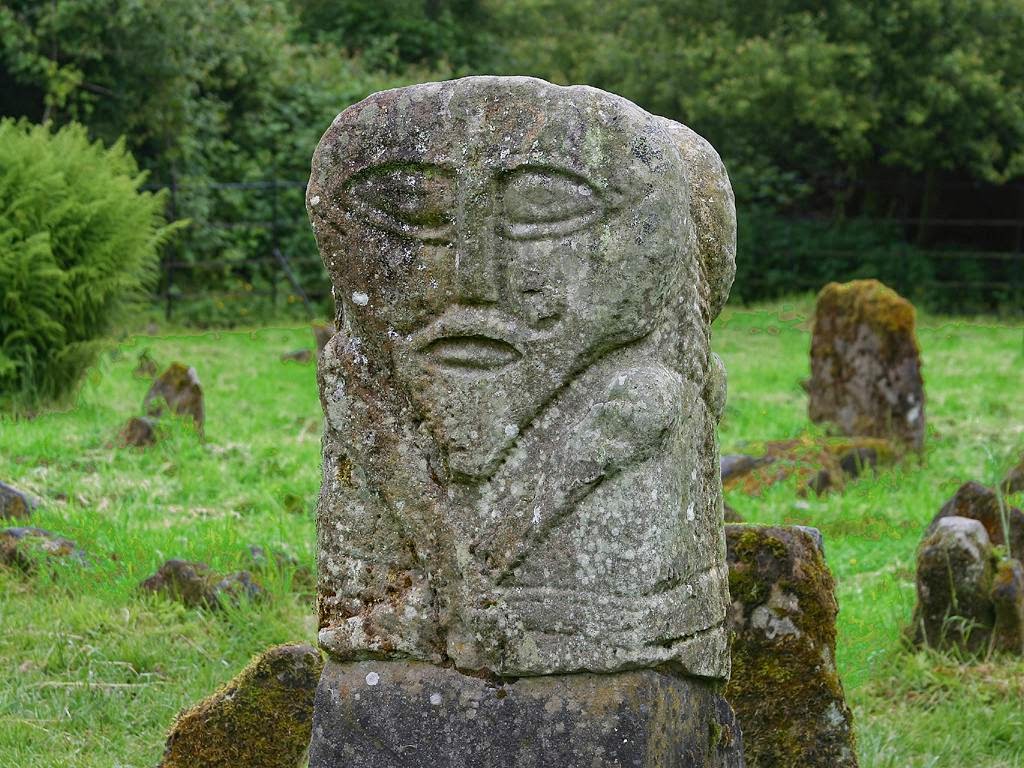 A group of bronze idols was discovered in mid 18th century in the lake Tollensesee near Prillwitz in Mecklenburg, South Baltic. These idols are today known as Prillwickie idols. The first information about their discovery was published in 1768. Many of them bear Slavic inscriptions in runic letters. A significant number of the figures shows the characters with lion heads and lush manes. Here is one: 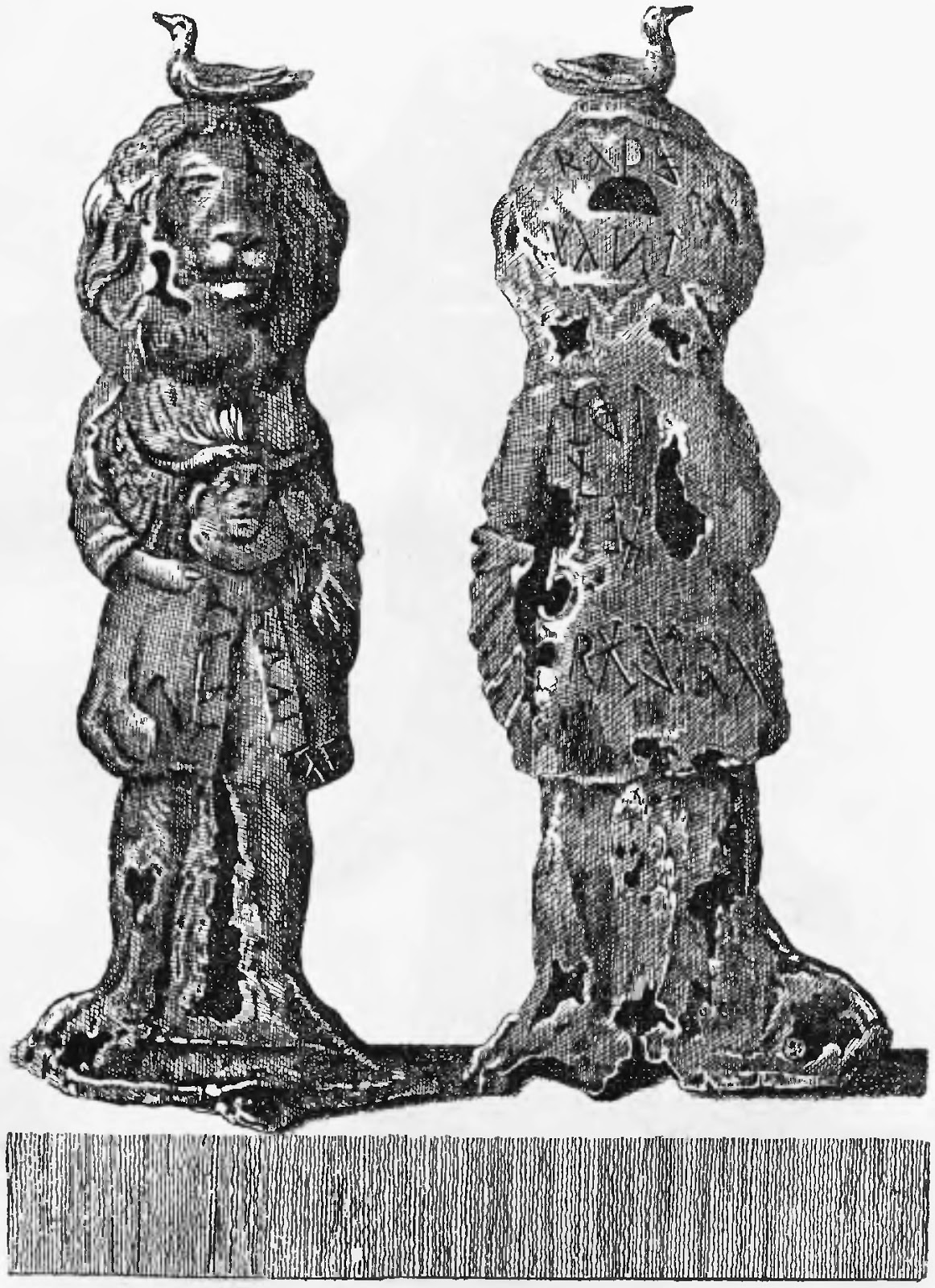 Finding of these idols was a big event in Europe at the time and initially researchers commonly accepted their authenticity. The authenticity of the finds was confirmed by many scientific authorities of the time, such as Lawrence Surowiecki, Joachim Lelewel and Wojciech Cybulski.

The authenticity of the alleged findings of Prillwitz was challenged in the mid-nineteenth century. They were alleged to be "clumsy bronze replicas of other idols unrelated to Slavs....probably forged by a goldsmith from a nearby town...."

The whole debate about the authenticity of these idols has restarted again. It is not entirely certain whether the figures are the work of a forger...

Prillwitz idols are now kept in a museum in Schwerin (Slavic Zverin).

Is it possible that the originally "authentic" idols were proclaimed to be "forgeries" during the rise of the German nationalism in the 19th century which tried to remove any mention of the existence of the Slavic culture in German lands? Is it possible that this idol form Armagh actually proves the authenticity of these Pomeranian idols? I believe that it does.

The importance of this is impossible to emphasize....

It is hard to believe that some Pomeranian goldsmith from a small village of Prillwitz would have known about this obscure statue hidden in Armagh cathedral and that he made his "clumsy copies" that look exactly like the Armagh lion man. And if he did why would he had done it? What I think we heave here is a proof that the Pomeranian figurines are authentic ancient Slavic idols and that the Armagh stone slab is just another proof of the South Baltic, Slavic, Scythian influence on Ulster.

Now that we know that the Pomeranian idols are authentic, and considering that the Pomeranian idols have Slavic texts inscribed on them in runic alphabet, this shows that Slavs did use runic alphabet to write. This confirms the words of Chernorizets Hrabar, early medieval missionary among Slavs, who said that "Slavs wrote using several foreign alphabets and their own alphabet which he called cuts and notches"...This means that Slavs had alphabet before Cyrilic and Glagolitic alphabets were invented for them by Christian missionaries. 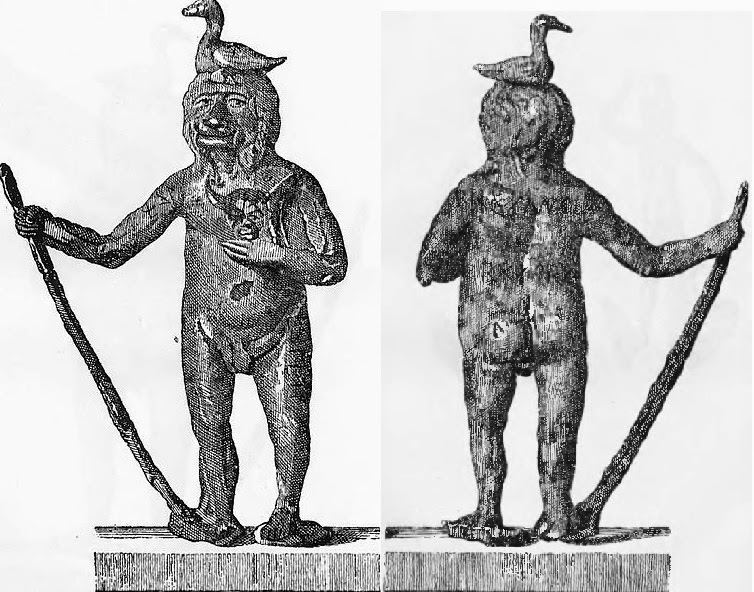 This is one of the Prillwickie idols group statues from south Baltic. 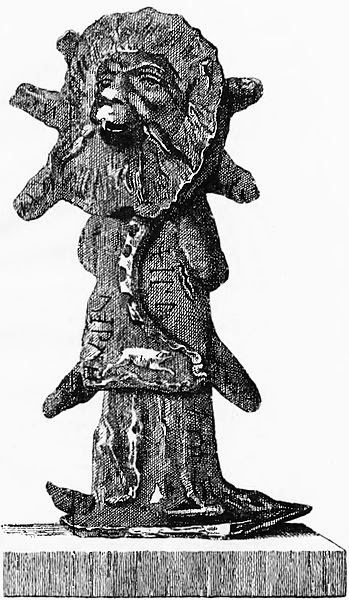 This is another sculpture from the Prillwickie idols group. 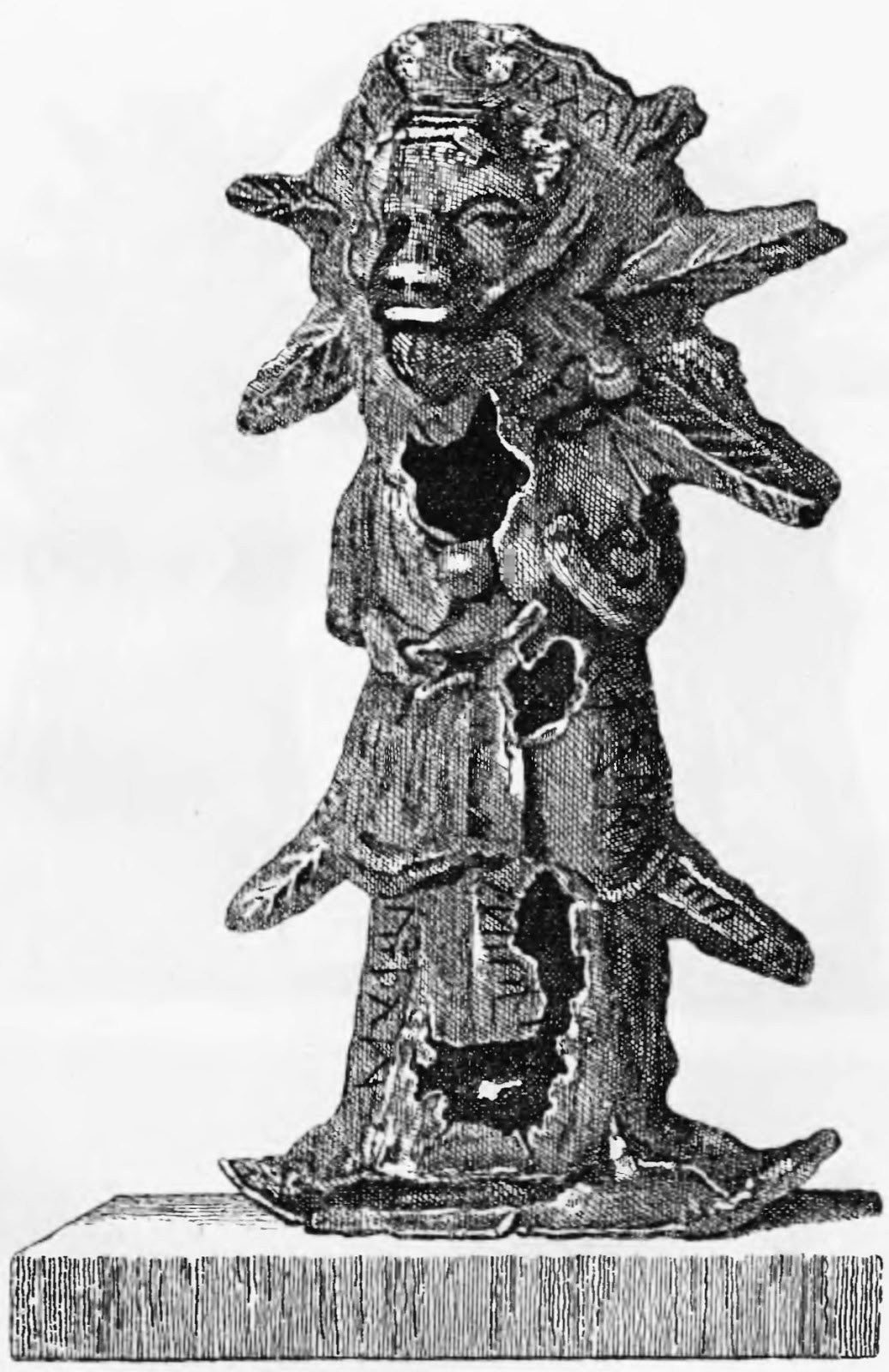 If we look closely to the head of this idol we see that it has changed into what seems like a bull's head. It seems that there are indeed two related images, the bull and lion. The obviously lion headed Radegast, the idol with the duck on his head, has bull's head on his chest. The below image indeed could be either bull headed or lion headed, it is not clear. Crom Dubh, Hromi Daba, Grom Div, The Thundering Sun Giant, was often associated with the bull and is said to have been the bull or that bull was his sacrificial animal. Summer, the growing season, starts in Bull (Taurus) and ends in Lion (Leo). The Lion headed figure has bull on his chest because the Leo sun, the old sun contains bull Taurus sun, the young sun. The old Sun is the young sun in its heart. But also it is the lion that kills the bull. The Leo is the end of summer, the death of summer. Also it is the beginning of autumn, the harvesting season, and this is why the bull gets slaughtered, killed, harvested by Lion as a sacrifice for the good harvest....Lion slaughtering bull is one of the oldest mythological scenes. I am preparing an article about the symbolism of these scene and will publish it soon.

Slavs also had god Belbog of whom we know even less. I would like to propose that Radegast and Belbog are one and the same deity and they were represented as the man with the lion's head.

Belbog means white god. This god is the equivalent of the Celtic god Belenos and Welsh god Beli. This is the god of day, summer, light. The white part of the year of the day. The name of the Celtic god Belenos comes from bel + nos. In Slavic languages bel, beli, beo means white, and nos means carries, brings. So belenos = bel + nos = white + brings = the bringer of the white??? Belbog comes from bel + bog = white + god.

Why is this god represented as a man with the lion's head? This is a representation of an anthropomorphic sun. Sun is the strongest in Leo and middle of Leo is also the middle of the white part of the year, of Bel. This day, the 2nd of August, is also the day of Crom Dubh, Hromi Daba, Grom Div...The thundering sun giant who has sun as his head...

In both Serbian and Celtic calendar the year was divided into two parts, the dark, black part (winter and spring) and white part (summer and autumn). Beltane (Djurdjevdan, St Georges day) and Samhain (Mitrovdan, St Martin's day) marked the borders between these two parts of the year. Beltane is the day of Bel, Beli, Belenos, Belbog the day of Bringer of white, light. Samhain is the day of Bran, Vran, Chernunos, Černbog, Crnbog, the Dark god, the bringer of darkness. Čern, Črn, Crn means black in Slavic languges, so Chernunos = Chern + nos = black, darkness + brings, carries = the bringer of darkness??? Belbog - Črnbog; Bel - Bran, Vran; Belenos - Chernunos; are two halves of the solar year, the white and dark part of the year from the Celtic and Serbian calendar.

Beltane is the Gaelic May Day festival. Most commonly it is held on 30 April, but sometimes on 1 May, or about halfway between the spring equinox and the summer solstice. Historically, it was widely observed throughout Ireland, Scotland and the Isle of Man....Beltane is mentioned in some of the earliest Irish literature and it is associated with important events in Irish mythology. It marked the beginning of summer...

The name for Beltane In Irish it is Bealtaine, in Scottish Gaelic Bealltainn and in Manx Gaelic Boaltinn or Boaldyn.

Since the early 20th century it has been commonly accepted that Old Irish Beltaine is derived from a Common Celtic *belo-te(p)niâ, meaning "bright fire". The element *belo- might be cognate with the English word bale (as in bale-fire) meaning "white" or "shining"; compare Old English bael, and Lithuanian/Latvian baltas/balts, found in the name of the Baltic; in Slavic languages byelo or beloye also means "white", as in Беларусь (White Russia or Belarus) or Бе́лое мо́ре (White Sea).

In Irish the word for fire is tine. In Serbian word "tinja" is a verb meaning "to smolder, start, kindle fire". Beltine means white fire but also smoldering kindling, starting of the sun's fire, the beginning of summer. This is why bonfires are lit for Beltine, to help the sun to rekindle... 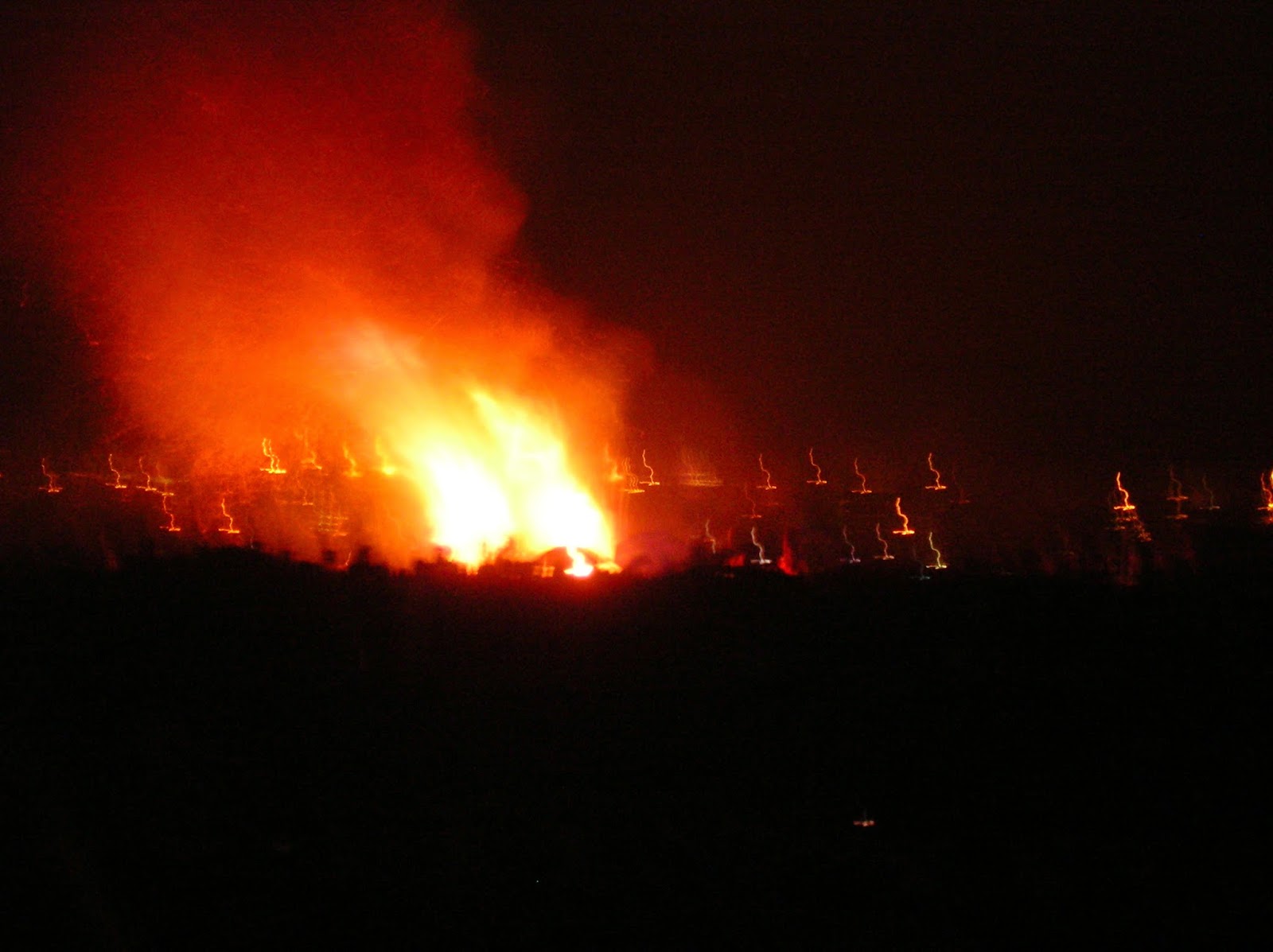 Beltane is the day of Beli, Belenos, Belbog the god which brings summer. And here is another one of the lion headed Radegost Belbog figurines from south Baltic: 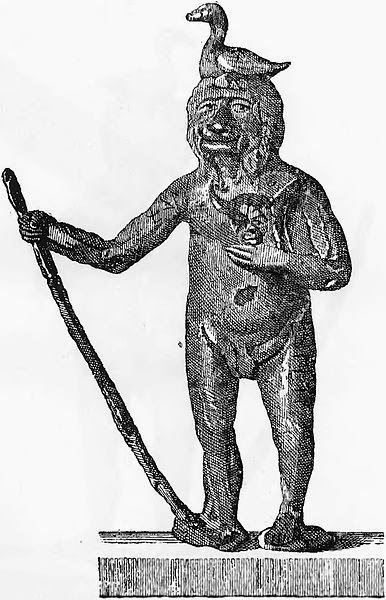 I often wandered what the duck was doing on this idol's head? Knowing what I know now, I am certain that the duck is on his head to represent the return of summer, the white (beli) part of the year. Ducks, which are migratory birds, and which according to Slavic mythology spend winters in "the land of the dead, Irij", return to Pomerania and have ducklings at the end of April, just before the beginning of the summer, the 6th of May . Duck is the welcome guest = rad gost, Radegos. Radegast. This is an euphemism for the beginning of summer...This means that Radegost was not a deity, but the name for the beginning of summer. The deity is Beli, Belenos, Belbog.

We have hundreds of Baba stone figures in Central Europe and South Baltic and only few in Ulster and nowhere else in Europe. We have hundred of Belbog figurines with Slavic inscriptions in South Baltic, and only one isolated example in Ulster and not one anywhere else in Europe. Beli, Belenos, Belbog, Beltine all have full etymology in Slavic languages. This opens a big question: how did these tradition come to Ireland and Britain? Who brought them and when?
Posted by oldeuropeanculture at 15:13