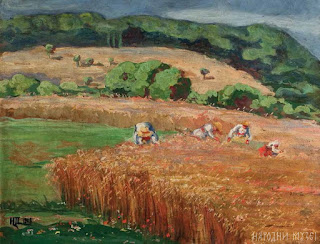 In Labor, northern Croatia, when the last sheaf of wheat was cut, it was thrown as high up as possible in the air with these words: "God give us bread as tall as this".

Then a wreath was made from the sheaf and wild flowers and was placed on the head of the most beautiful harvest girl. She would then take it to the field owner's house. What this girl looked like can be seen on this picture from Ukraine where they had similar ritual. 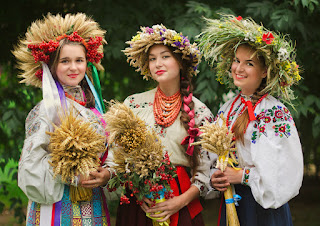 In Ukraine it was important that the girl was also a virgin. This is in accordance with many other Slavic fertility rituals which directly link female fertility and Earth fertility. Earth being "Virgin mother" is here represented by human virgin....

I Labor, the rest of the female harvesters would walk along with the girl carrying the wheat wreath singing:

We are going home, praying to god
God mighty, Bright Sun
Are you at home our lords
We are bringing you a present, a wheat wreath...

Once the procession arrived to the field owner's house, the girl would give him the wreath and in return she would get some change. Then everyone was given vine which they drink in front of the house before going in for dinner.

What this procession of harvest girls from the field into the village probably looked like in Croatia, can be seen on this 1910 painting by polish Alfred Wierusz-Kowalski entitled "Dożynki", which is what this end of harvest ritual was called in Poland. 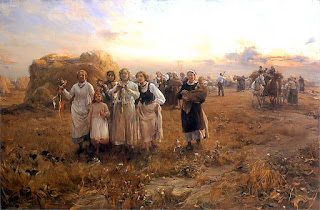 The wreath was the central feature of most celebrations associated with dożynki, as it symbolised a rich harvest, the prospect of wealth and the power of new life vested in the grain gathered during the Summer. 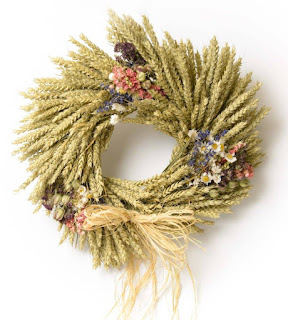 In many regions the grain from the wreath was the first batch of grain to be threshed. It was then set aside for next year's sowing and was the fist grain to be sawn. Reenactment of the threshing of the last sheaf grain, Ukraine. 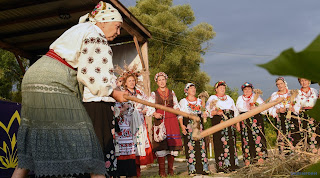 The wheat wreath was also a symbol of sun, solar year and neverending cycle of death and rebirth (sawing, growing, harvesting, sawing...)

Considering that the ritual was found in the Balkans and in Eastern Europe, this was obviously once a Pan-Slavic harvest ritual...