Archaeologist David Eitam said in his comment about multi hole bedrock mortars: "It seems that making flour, was in the past a collective activity. The reason for that was that acorn or cereal grinding was done using grinding stones. This was hard monotonous work which was best endured if done in company.  We can easily imagine the lively group of women covering the large bedrock and the sound of grinding and chat among the crowded millers."

We know from the ethnographic data from North America, that grinding acorns was at least in some cases a communal activity. You can find more info on this in the article "The Distribution and Function of Bedrock Mortars in California".  We also know from the archaeological data from Europe, that grinding cereal was also a communal activity. We can actually see it on this clay model depicting collective grain grinding from Cyprus, from Iron Age settlement at Tel Dor. You can find more details about this site in "An Iron Age I Canaanite/Phoenician Courtyard House at Tel Dor: A Comparative Architectural and Functional Analysis" 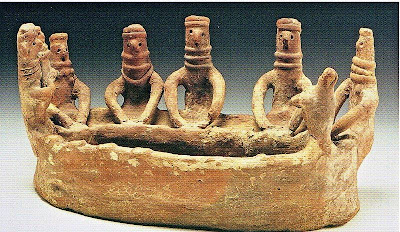 The easiest way to make communal grinding areas was to cut the mortar holes in the bedrock, creating bedrock mortars. Like these ones at Indian Grinding Rock State Park: 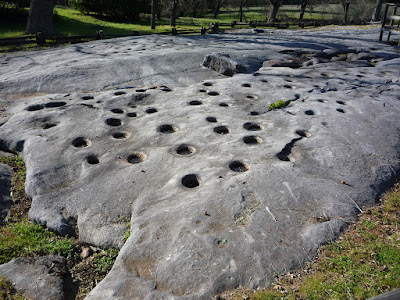 In this article I would like to present some new (to me :) ) evidence that supports my hypotheses that a lot of the European bedrock stones with large and deep cups could be (yet) unclassified bedrock mortars.

I will start with the bedrock mortars used by the Chalcolithic communities from Central Israel (4,500–4,000/3,900 BCE). The grinding holes were cut into a bedrock with different profiled holes used for grinding different type of material, like grain (and possibly acorn), olives, grape (?). These are examples of the bedrock mortars from the Gassulian (Ghasulian) culture. 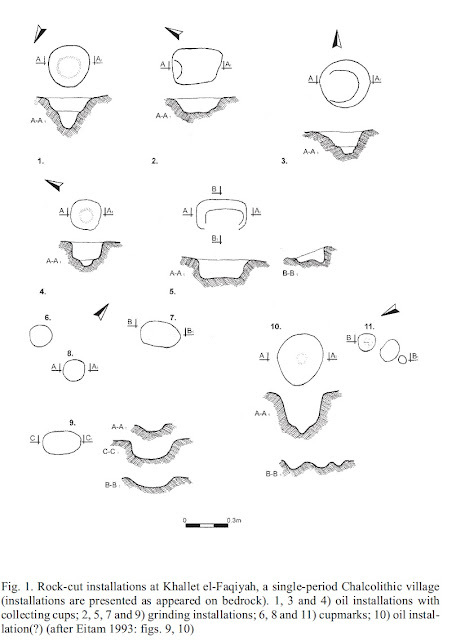 You can find more info about these grinding bedrock mortars in the article "Cereal in the Ghassulian Culture in Central Israel: Grinding Installation as a Case Study. Israel Exploration Journal 59,1: 63-79"

This is the picture of the bedrock holes from the Ghassulian Horbat site. 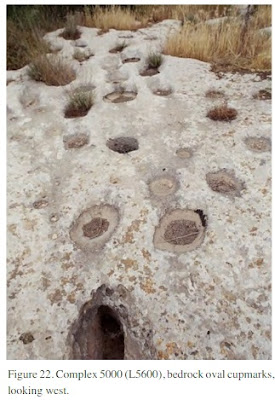 The picture was taken from the article "Excavations at Horbat 'Illit B: A Chalcolithic (Ghassulian) Site in the Haelah Valley". However these holes are in this article classified as flint excavation holes. This is based on the fact that a piece of flint was found at the bottom of one of the holes. 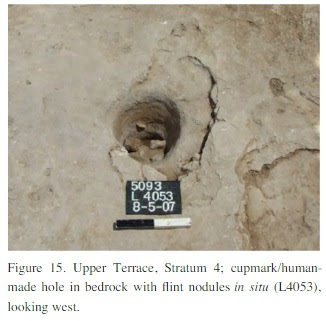 I wander why would anyone make such smooth narrow round holes to excavate flint? Why not just continue to break bedrock to the left and right of the flint peace to see if there is more hidden in the bedrock? I believe that these are instead bedrock mortars. And this particular one was abandoned when the grinding exposed the hard flint at the bottom, rendering the mortar hole useless. But that is just my opinion.

Since then, I came across this article, "Excavations at Modi‘in – H̱orbat H̱adat and Be’erit (A)" by Edwin C.M. van den Brink, which classifies these features as bedrock mortars... 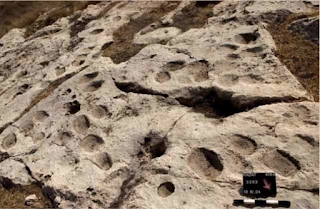 From the above three articles it is plain to see that there is still no consensus on the issue of the classification of these bedrock holes.

But a lot of work has been done lately on collecting and classifying all the available data related to bedrock sites. This is a good article that explores this issue: "Late Epipalaeolithic Rock-Cut Installations and Groundstone Tools in the Southern Levant. Methodology and Classification System".

Now, bedrock mortar type of utensils start to appear in 13000 BP and their use peaked in 6000 BP (Late Chalcolithic) and continued in rural MBII sites.

Here are some Natufian bedrock mortars from Mount Carmen site dated to 12500 BP. You can find more info on this site in the article "3D Characterization of Bedrock Features: A Natufian Case Study". 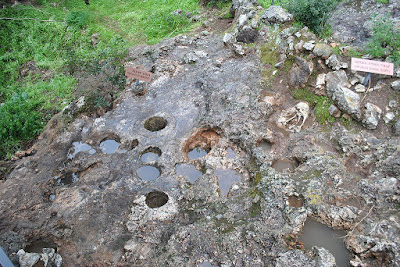 This article entitled Article "Experimental Barley Flour Production in 12,500-Year-Old Rock-Cut Mortars in Southwestern Asia" presents result of the experimental archaeology experiments at a Natufian site in the Southern Levant documents for the first time the use of 12,500-year-old rock-cut mortars for producing wild barley flour, some 2,000 to 3,000 years before cereal cultivation. 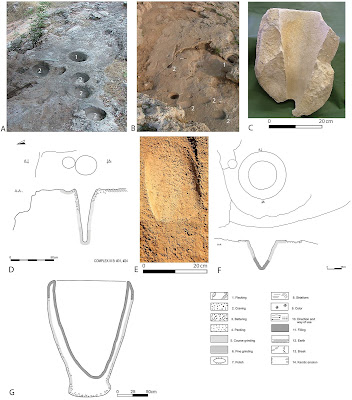 Considering that we have evidence of the use of acorns as food in the south western Asia in late Paleolithic, Mesolithic and Early Neolithic time, I would suggest that these mortars could also have been used for grinding acorns, and that that was their original intended use. But once you develop a suitable grinding technology for grinding acorns, it can be applied, with slight modifications to grinding of any similar type of material, like wild grains.

But Natufians also used single hole boulder mortars, as I already said in my post "Acorns in archaeology". 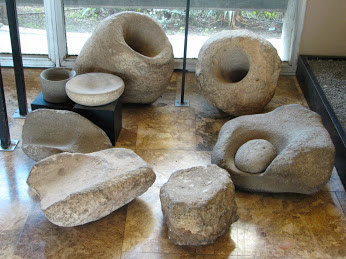 These are the large cup holes from the hillside boulders at Gobelkitepe, dated to (7560–7370 bc). The hillside is apparently covered in cupping holes all about 500mm - 600mm, big enough to be acorn or grain grinding holes like the ones found on Bullaun stones in Ireland and the North American grinding boulders and on the above Natufian bedrock mortars. 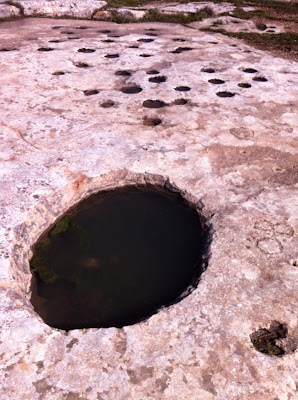 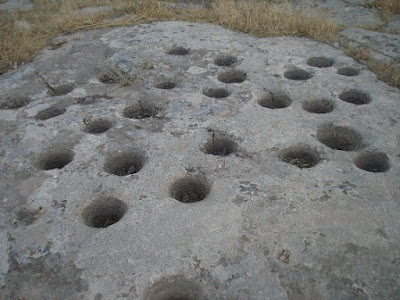 As I said above, once you develop a suitable grinding technology for grinding acorns, it can be applied, with slight modifications to grinding of any similar type of material, like wild grains. Or ore. We know from the ethnographic and historical records that almost identical types of mortars were used for grain, spices, pigments and ore grinding. So it is no surprise to find bedrock mortars used for ore grinding.

This is the Pino del Oro Mining Zone (ZoMiPO) is located straddling the Duero river, within the Arribes Natural Park, in the western part of Zamora province, and adjacent to the Portuguese border. It involves a group of very peculiar gold mining structures dating from the Roman period (1st-2nd Centuries). These are grinding mortars cut into the bedrock and used for grinding ore. Were they originally used for grinding cereal and before that for grinding acorn? 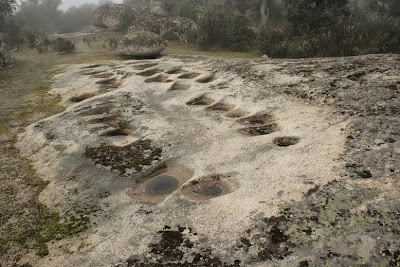 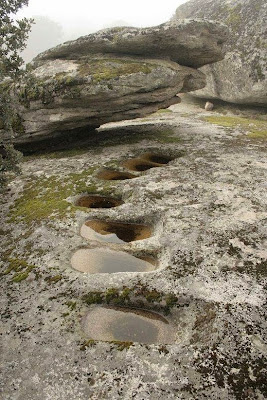 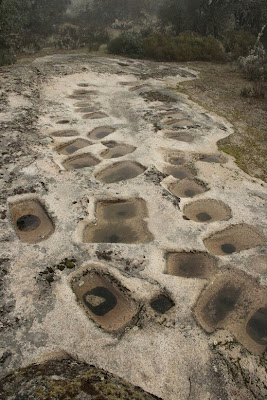 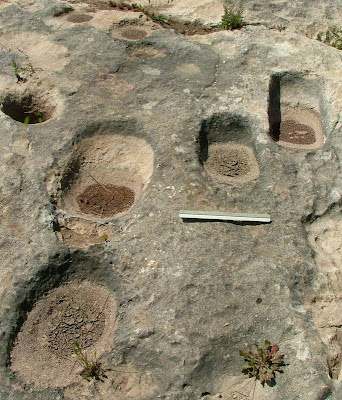 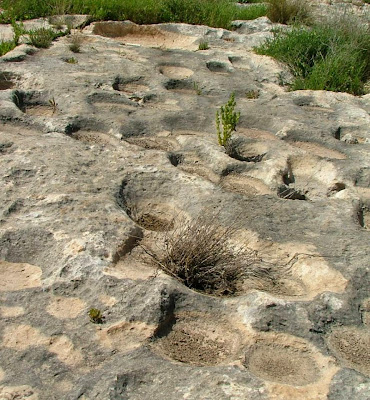 I believe that this new evidence adds a bit more support for my theory that Bullaun stones from Ireland and the similar stones with large deep cup marks, were made to be used as mortars for grinding probably originally acorns, and then wild grain, grain, tubers and even ore...

So what do you think, could the Irish Bullaun stones, like this Clonmore Triple Bullaun Stone be actual bedrock mortars? 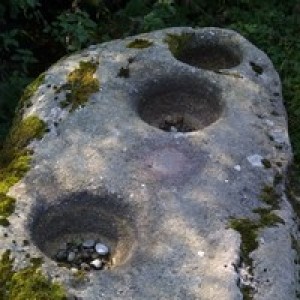 The debate will undoubtedly continue. Great. :)