There is a Serbian proverb which says: "Ko se dima ne nadimi, taj se vatre ne nagreje". It means: "Who doesn't get smoked, doesn't get warm". The proverb simply states the fact that from the moment people started using fires inside roofed dwellings, the inside of these dwellings looked, pretty much permanently, like this: 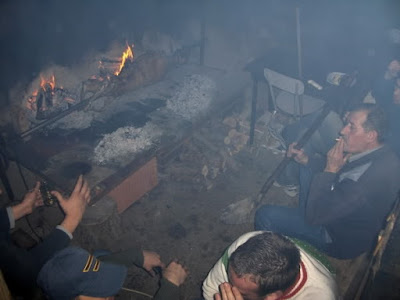 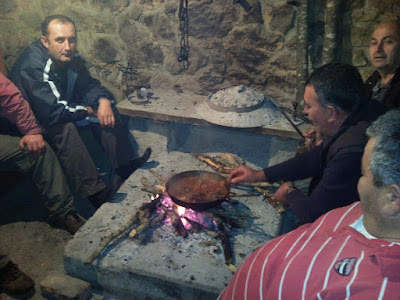 The above two pictures were taken recently in Croatia, inside of two traditional houses with a built in hearths used for traditional cooking. Nice and cosy and smoky.

The problem is that until very recently, houses had hearths and or stoves but didn't have chimneys.

This is a hearth in a reconstructed Iron Age round house. 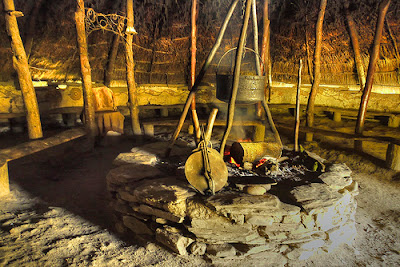 This is a 19th century Serbian house from Dinara region: 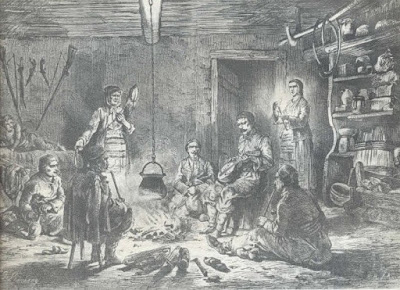 This is a hearth in a 20th century house in Montenegro. 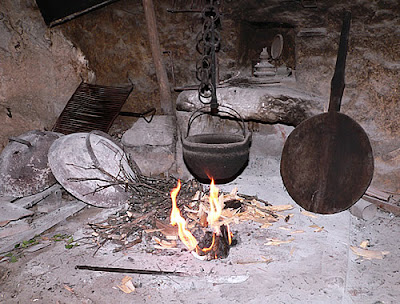 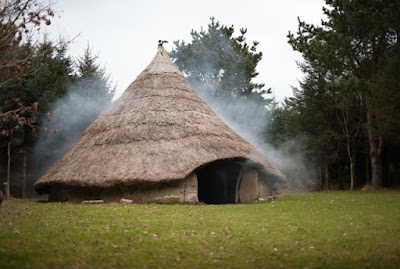 If you for instance approached an Iron Age roundhouse village, or any other village with thatched houses, you would have seen something like this:

The fire in the Neolithic, Bronze and Iron Age and Medieval houses was pretty much never extinguished. It was constantly smouldering. Preserving of the house fire was one of the most important duties of the housewife. This means that the house was always smoky. Interestingly, the smoke permeating the roof actually protected the roof from rotting as it killed bacteria and moulds. A big problem in these archaeological parks today is that because there is no permanently smoking fire, the roofs rot away very quickly.

During the winter, I would guess, the house doors were shut, so even more smoke gathered inside of the house and slowly drifted upwards towards the roof. And up there, under the roof, on the supporting beams, people hang fish, meat and skins. Why? Well in the same way the smoke killed bacteria and molds in the thatch, it did the same with the bacteria and moulds in meat turning it into smoked meat. 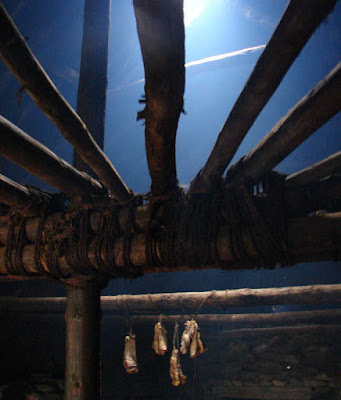 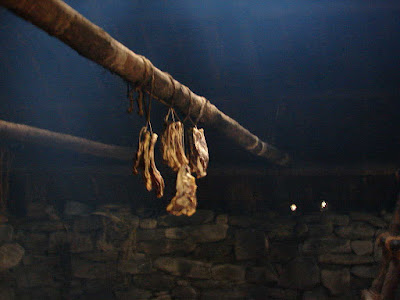 This type of meat curing, preservation is still used today. This is a picture of an inside of the typical private smoke house from the Balkans. The meat is first covered in salt and left to absorb salt from 10 - 20 days and it is only then smoked. This makes the final product much more resistant to bacteria and therefore more durable. 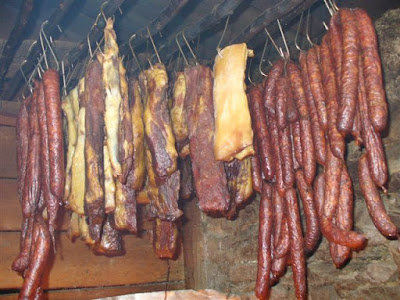 The smoke from the hearths and ovens would also have helped preserve animal skins and turn them into smoked skins (buckskin, leather). 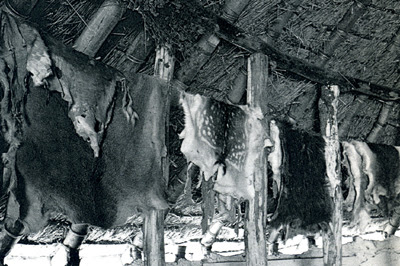 Buckskin is the soft, pliable, porous preserved hide of an animal which is used for making clothes and bedding. In order to make Buckskin from a raw hide, you first need to scrape the hide to remove any flesh remains. Then you need to tan the hide using any emulsified fat, such as egg yolks or the animal's brain mixed into water. After this you need to stretch and dry the hide which involves continuous pulling and stretching of the hide in all directions, which lubricates the fibers of the hide with the oil of the dressing, and ensures that the fibers stay lubricated. Finally, the dry skin which should now be totally supple and soft, has to be smoked, in order to make it washable and resistant to water.

You can see how this all fits inside of a typical Iron Age roundhouse on this picture: 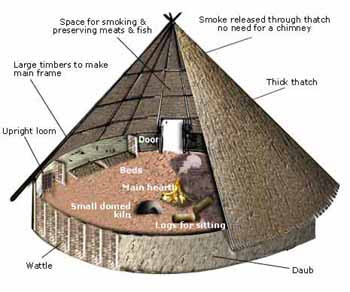 So it turns out that, probably by chance, people realized that smoking meat and skins preserves them, protects them from rotting. No wonder then that smoke has been used to preserve and flavour food and treat leather since a very long time ago. How long time ago is long time ago? No one knows really, but I would venture to say that the intentional use of smoking for preserving food and skin was probably already used in late Paleolithic, early Mesolithic period of human history.

And here is where we come to linguistics. In English, the word for preserving meat and skin using smoking is "curing".

When we look up the word "cure" in the English Etymological Dictionary it tell us this:

"A process of preservation, as by smoking. In reference to fish, pork, etc., first recorded 1743."

So what was the process of curing meat using smoke called before 1743 I don't know. I would be grateful if someone would clarify this for me. Before 1743, the word "curing" was used with the meaning:

"Act of healing or state of being healed; restoration to health from disease, or to soundness after injury, a method, device or medication that restores good health. first recorded in late 14c."

But where does this Latin word come from? Well, the English Etymological dictionary says: "a noun of unknown origin"...

Let's see if we can find the origin of this mysterious word.

The original meaning of the verb "to care" was "to care for",  basically "to keep alive", "to preserve". We take care of someone or something that is dear to us, precious to us, and which is not able to take care of itself, like a child, a sick or wounded person, a young domestic animal. So what does "caring for" something or someone involve? Well basically it means keeping this something or someone dry, warm, feeding it, cleaning it, sheltering it from wind and rain, protecting it, making sure that nothing bad is done to it and that it doesn't do anything bad to itself and its surrounding (like wreck the place if what you care for are children or young animals). Basically "caring for" means keeping alive. The "caring for" something or someone is a full time job and requires staying in and around the shelter, house all the time. And this is why the "caring for" was always the job of women. They "cared for" children, sick and wounded and young animals. Men "took care of" jobs that needed to be done, flocks, crops, land, and later towns, states...but with male duties the original meaning of "care for" was gradually lost and was turned into passive "worry" or active "manage"...And this is what we are left with today pretty much. We "care" for so many things, we even occasionally "take care of" as thing or two, but we rarely "care for" anyone or anything.

Anyway, in the past, apart from caring for children, sick and wounded and young animals, women cared for another very important thing: fire. Fire in the house hearth was one of the most precious things which had to be constantly cared for, and never ever be allowed to die. This behaviour has been recorded by ethnographers everywhere in Evroasia even in the 20th century, and it comes to us straight from the Paleolithic, and maybe even Mesolithic times, when people didn't know how to make fire. Fire had to be found, a natural fire from a thunder strike or a forest fire, and then carefully preserved by caring for it. The caring for fire was so important that it was elevated to a level of a religious duty. Every household would care for their own house fire, but temples would would also care for the village or town fire which also should never have been allowed to die. Even after people discovered reliable ways of making fire, this belief in sacredness of fire and caring for fire remained in beliefs related to heath fire.

So how do you care for fire? Well in exactly the same way you care for children, sick and wounded and the young animals. Basically caring for fire means keeping fire dry, warm, feeding it wood, cleaning it from ash, sheltering it from wind and rain, protecting it, making sure that nothing bad is done to it and that it doesn't do anything bad to itself and its surrounding (like burn the place down). The most important part of caring for fire is feeding it wood, basically keeping the fire alive, keeping it burning.

In Slavic languages we have a word "kur" which means "to burn, to smoke, to heat":

This word has cognates in:


The above Slavic word "kur" to burn is another variant of the Slavic word "gor" meaning to burn, about which I already wrote in my post about warmth, fire, sun. Like the word "kur" the root "gor" also has cognates in other Indoeuropean languages, but it seems to be best preserved in Slavic languages and Irish.

Here is just an example group from this cluster from Serbian and Irish: