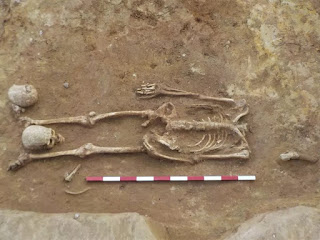 Of the 52 skeletons discovered in the fourth-century A.D. Roman cemetery discovered in the village of Great Whelnetham in Suffolk, England, 17 had been decapitated and the heads were placed between their owner's legs or feet. Why? Well...

When archaeologists opened medieval graves at a highway construction site near Gliwice, Poland, they came across skeletal remains of humans whose severed heads rested upon their legs... 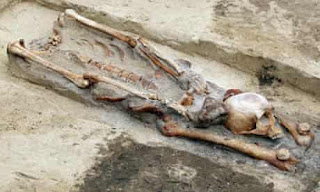 Apparently this is an ancient Slavic burial practice for disposing of suspected vampires, in hopes that decapitated individuals wouldn't be able to rise from their tombs...Practiced by the Western Slavs mainly...

Now the article about the English Vampire burials says that: "The decapitations might be related to pagan belief systems that held that spirits need to be released for the afterlife or even that the head was a container of the soul."

Which is why the head was cut off...The vampire was "the undead", the body which soul never left...So kind of linked...Otherwise all the dead would have been decapitated, right?

By the way you do know that Vampire is a Serbian word?