St Paul among the Slavs

This is a fourth century painting of St. Paul. Paul's dress, the scroll in his hands, and the container with more scrolls at his feet, all identify Paul as a philosopher, a teacher. 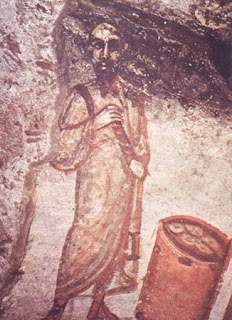 During the first half of the first century AD, St Paul traveled all over the Balkans teaching the Gospel of Christ to the local population.

The first place in Europe visited by St Paul and his followers was Filipi, the biggest city in the Roman povince of Macedonia. Christianity was the "city faith" and so it is not a surprise that St Paul preached mainly in cities along major Roman roads. He first followed Via Ignatia, the main road leading West into Europe from Bosphorus. Following this road he arrives to Thesaloniki, a big port where Via Ignatia meets Via Militaris, the main Roman road going north. Following this road St Paul travels through Vardar and Morava valey and visits Skupija (Skopje), Ulpijana (Lipljan), Naisus (Niš), Remizijana (Bela Palanka) and finally he and his followers arrived to Viminacijum (Stari Kostolac) the main city of the Roman Province of Upper Mezia, which lied next to Danube. They then follow river Danube westward and pass through Singidunum (Belgrade).  One part of St Paul's entourage then follows river Danube towards North Western Europe. The other part with St Paul himself, follow river Sava and arrived to Sirmijum (Sremska Mitrovica). 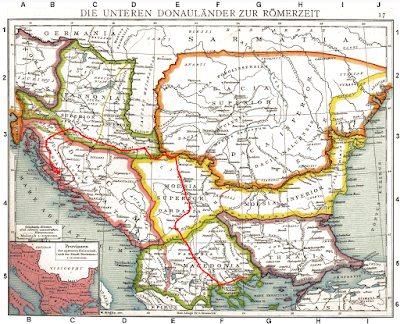 After the end of his Balkan travels, in the winter of AD 57–58, St Paul wrote the letter to Romans in which he says this:

"Through mighty signs and wonders, by the power of the Spirit of God; so that from Jerusalem, and round about to Illyricum, I have fully preached the gospel of Christ..."

How far west did St Paul go into Illyricum? Well we don't really know. But we know that he did go through the Roman town of Burnum.

This is Krka monastery, in northern Dalmatia, today in Croatia. 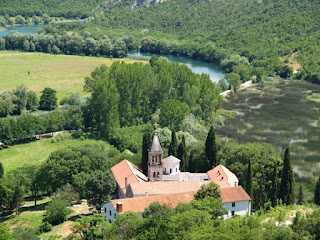 There is a legend preserved among the Serbs living in the area, that the monastery was built on the spot where apostle Paul preached to the local population while he was traveling through Roman province of Illyricum, which at the time comprised of Dalmatia and Panonia.

"This legend says that St Paul, traveling from the east to Rome, traveled on the road, which passed by old Roman town of Burnum (...), and that he stopped next to the river Titius (today Krka) and preached the gospel of Christ. The legend specifies the exact place where that happened and that is the same place where today we find the monastery dedicated to Archangel Michael located on the banks of the river Krka. The first person who recorded this legend was famous Dalmatian historian J. Lucije, who in 17th century wrote that ne knew an old epigraph cut into a wooden panel in Slavic tongue, which was kept in the said monastery, and which testified of the St Paul's travles through Dalmatia."

Bishop Nikodim Milaš then goes to say, that based on the testemony of the 18th century monk Gašpara Vinjalić, there once was an old history book in which there were verses in Slavic tongue commemorating the place where St Paul preached, and specifying that this probably happened in 65 AD.

The legend about St Paul spreading gospel in Dalmatia is also mentioned by Italian travelogue writer Alberto Fortis in his book "Traveling through Dalmatia" buplished in 1774, and by Italian historian C. F. Bianchi in his book "Zara cristiana". Bianchi says that "In the church of the Krka monastery, until the end of the 18th century existed an ancient picture depicting St Paul preaching to the Dalmatians. The inscriptions on that picture were in Slavic tongue and the Dalmatians were dressed in the local dress"

This Christianisation of the Balkans performed by St Paul during the first part of the first century was preserved in the local Slavic tradition particularly Serbian tradition.

Now which people did St Paul convert to Christianity in Illyricum? Illyrians of course...But who were Illyrians?

The Russian Primary Chronicle is a history of Kievan Rus' from about 850 to 1110, originally compiled in Kiev about 1113. 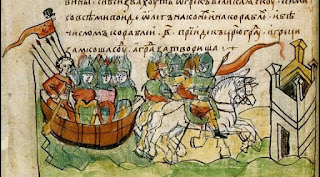 In it there is a part that talks about St Paul baptising Slavs. In Illyricum!

"...He traveled among the Moravians, and the Apostle Paul taught there likewise. For in that region is Illyricum, whither Paul first repaired and where the Slavs originally lived. Since Paul is the teacher of the Slavic race, from which we Russians too are sprung, even so the Apostle Paul is the teacher of us Russians, for he preached to the Slavic nation, and appointed Andronicus as Bishop and successor to himself among them. But the Slavs and the Russes are one people, for it is because of the Varangians that the latter became known as Rus’, though originally they were Slavs..."

This is extremely interesting, because of a legend which was preserved among the people from Polesye, the vast marshy woodland area straddling the Belarus–Ukraine border. 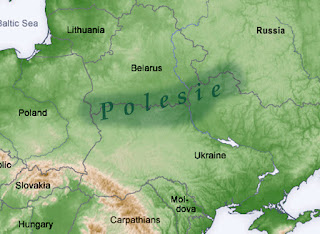 "Serb tribes were great enemies of the Romans. Finally a Roman emperor got really angry and sent an army to attack them. The Serbs were driven out of their homeland and came and settled down here, in the Pinsk Marshes, in Polesye..."

Interestingly, this same area is by some historians marked as the birth place of Slavs, from which they spread westward in the 5th century AD. 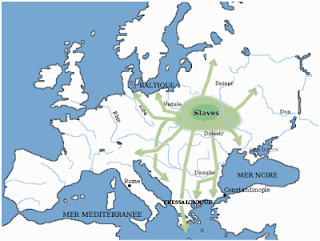 There is also the 14th century "Chronicle of Dalimil", the first chronicle written in the Old Czech language. 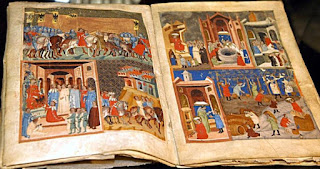 It lists the chronological history of the Slavs, starting with the most ancient of times and finishing with the important events of the 14th century.

The Chronicle alleged that all Slavs originated "in the south", in the "land of Serbs". That their original name was Serbs. And that Czech was a Serbian chieftain who murdered someone and had to flee north to what is now Czech Republic.

So how can we understand all this data put together?

1. St Paul comes to Illyricum in the 1st half of the 1st century AD (Letter to Romans).
2. There he baptises Slavs (Serbs?) who at that time lived in Illyricum, their old country (Russian Primary Chronicle).
3. Serbs (Slavs?) were great enemies of the Romans. Some of them were (at some stage after the 1st half of the 1st century AD) expelled by the Romans from Illyricum and fled to Polesye (Polesye legend), while others surrendered to the Romans and stayed in Illyricum.
4. Serbs (Slavs?) who fled to Polesye return to the Balkans starting from the 5th century AD.

What do you think?

Are these legends just a product of romantic Slavic nationalism?

Well there is another source that talks about Slavs being baptised by St Paul in Illyricum during the 1st century AD. And this source is anything but Slavic or pro Slavic.

Illyricum sacrum is a multi-volume historical work written in Latin dealing with history of the Catholic Church in the Balkans. 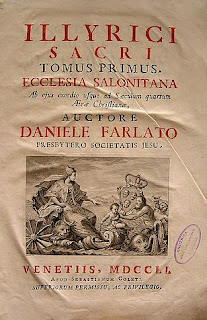 The work was published in eight volumes in the period 1751-1819, with the ninth tome printed in the period 1902-1919 as an appendix to Frane Bulić's Bulletino di archeologia e storia dalmata.

In "Ilyricum sacrum" Farlati quotes a letter from Pope John X who was Pope in the 10th century, from 914 to 928. In this letter, the Pope identifies Balkan Slavic rulers from his time as descendants of those Illyrians who, even in apostolic times, received Christianity directly from the apostles.

What Slavic Kingdom in Dalmatia in the 1st Century AD?!

Pope John X was definitely not a friend of the Slavs or Slavic culture. The letter he wrote to the Slavic rulers of Illyricum contained an order that a Slavic language be banned from churches and replaced by Latin. He had no reason to invent the link between the 10th century AD Serbs and Croats and the 1st century AD Illyrians. So the only reason why Pope John X would have said something like that was because this was at his time a common undisputed knowledge...

Now what do you think about all this?