"On the First day of Christmas my true love sent to me
a Partridge in a Pear Tree.

On the Second day of Christmas my true love sent to me
Two Turtle Doves
and a Partridge in a Pear Tree.

On the Third day of Christmas my true love sent to me
Three French Hens,
Two Turtle Doves
and a Partridge in a Pear Tree.

This is the beginning of the well known English Christmas carol "The Twelve Days of Christmas".

It enumerates in the manner of a cumulative song a series of increasingly grand gifts given on each of the twelve days of Christmas, starting with a partridge which was given on the first day. The song, published in England in 1780 without music as a chant or rhyme, is thought to be French in origin, but really no one knows where the song comes from.

There are those who believe that the song has a hidden Christian meaning.

According to Ann Ball in her book, HANDBOOK OF CATHOLIC SACRAMENTALS:

"The "True Love" is Jesus Christ, because truly Love was born on Christmas Day.

The partridge in the pear tree also represents Him because that bird is willing to sacrifice its life if necessary to protect its young by feigning injury to draw away predators.
The two turtle doves were the Old and New Testaments
The three French hens stood for faith, hope, and love.
The four calling birds were the four gospels of Matthew, Mark, Luke, and John.
The five golden rings rerepresented the first five books of the Old Testament, which describe man's fall into sin and the great love of God in sending a Savior.
The six geese a-laying stood for the six days of creation.
Seven swans a-swimming represented the sevenfold gifts of the Holy Spirit-----Prophesy, Serving, Teaching, Exhortation, Contribution, Leadership, and Mercy.
The eight maids a-milking were the eight beatitudes.
Nine ladies dancing were the nine fruits of the Holy Spirit-----Charity, Joy, Peace, Patience [Forbearance], Goodness [Kindness], Mildness, Fidelity, Modesty, Continency [Chastity].
The ten lords a-leaping were the Ten Commandments.
The eleven pipers piping stood for the eleven faithful Apostles.
The twelve drummers drumming symbolized the twelve points of belief in The Apostles' Creed."

But, there is another possible origin and meaning of this song. The song could originate in an ancient Pre-Christian system of beliefs and could be linked to fertility rituals related to both female and earth fertility.

And the key for understanding this other possible (and I believe true) meaning of this song lies in the first verse:

The grey partridge is a native, non migratory bird of Eurasian shrub lands, grass lands and cultivated areas. The adult is a plump bird. The upper parts are chestnut-brown and grey, but the color is very variable. The hind neck is grey-brown. The wings are mottled brown and darker brown. 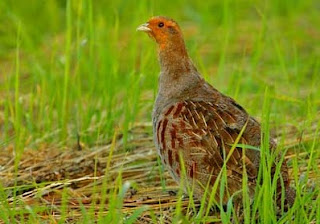 Gray partridges begin the slow process of courtship in late winter, as soon as the snow starts to melt. Both sexes perform numerous dramatic displays, including circling, neck-stretching and running with head lowered. In March, the males in a covey begin crowing with their “rusty gate” call, to advertise their presence, especially in the morning and evening. Crowing then leads to ritualized fighting between the males, which fly and peck at each other. Eventually, one male leaves the area, and the victorious bird remains to try and attract a female. The actual mating happens in late April. The female then builds the nest while the male stands guard nearby. The nest is usually located in grasses in open country or along roadsides, fences, hedgerows, ditches and banks. Shortly after the nest is complete, at the beginning of May, the female starts laying eggs. She continues laying one egg per day until her clutch of 9-20 olive-colored eggs is complete. This is one of the largest known clutches produced by any bird.

The partridge mating habits didn't stay unnoticed by our ancestors. At least in the Balkans. The word for partridge in South Slavic languages is "jarebica" pronounced yarebitsa. The word has no known etymology. I would like to propose one:

In South Slavic languages we have these two interesting words:

I think that this is quite a fitting name for a bird whose loud passionate mating covers the whole of spring.

There is someone else who goes through the same passionate courtship ritual at the same time as partridge. Young earth Vesna. She is born on the 4th of February, the first day of spring. She gets more and more beautiful as the spring progresses. During this time she is courted by the young sun Jarilo, her twin brother. Their courtship during the spring is nothing else but "jarjeb" meaning "youthful fucking", the "union" of the young sky (the father) and young earth (the mother). It is this union that produces all life and all the bounty of summer and autumn.


Jarilo, the young sun, marries Vesna the young earth on 6th of May, the day of Jarilo. The day of Jarilo, the 6th of May, is the day which in old Celtic and Serbian calendar marked the beginning of Summer. This is old Beltane, the festival of fire. The fire of the sun. And this is exactly the time when partridge starts laying its eggs. Eggs which are the result of its mating season, of "jarjeb". Eggs which are symbol of rebirth. The "rebirth" of nature after winter "death". The rebirth which is the result of the "jarjeb" between Vesna and Jarilo.

Christianity replaced Jarilo with St George, and the day of Jarilo is still today celebrated as the St Georges day (Djurdjevdan or Jurjevo in the Balkans).

South Slavic goddess Vesna is the young earth, the youthful face of Baba (Grandmother), Troglava (Three headed) Earth Goddess. Her name literally means Spring. She is the goddess of youth and female fertility and only has a positive aspect.

I believe that Partridge was in the Balkans associated with Jarilo's bride, Vesna and was possibly even her holy bird. Here is why I believe that this is the case.

This wedding song recorded in Poljci in Croatia describes the wedding feast. Here is just the beginning:

Another thing that shows that partridge was regarded as a symbol of fertility by the Balkan Slavs is the Croatian ceremonial wedding game called "traženje jarebice" (looking for partridge) which was first recorded in 17th century. The ritual was performed like this:

You can see that this ritual is directly linked to fertility. The groom is looking for a fertile young wife, and this is what partridge represents. The fact that the old woman which was brought out firs hold a sieve on her head shows that she is Baba, the Mother Earth, the mother of grain...Again we see linking of woman's fertility and the Mother Earth's fertility.

The same custom is found in other parts of Croatia and Bosnia except that partridge is replaced with dove or a lamb, but the ritual is the same...

Then in "Годишњи обичаји у Пироту и околини" (Anual customs and rituals in Pirot and surrounding area), by Sofija Kostic, we find a Serbian ritual song which describes the ritual feast held during the celebration of St Mitar (Martin) (Mitrovdan), and which used to last for 7 days:

Again the first thing eaten on the first day of the feast is roasted Partridge. Mitrovdan was the day, which in the old Celtic and Serbian calendar marked the end of Summer and the beginning of winter. This is old Samhain. You can read more about this old calendar in my post "Two crosses". If the mating season of partridge marks the beginning of hot part of the year, summer and autumn, the bountiful part of the year, it is symbolically fitting that the end of this period is marked by the death of partridge. He is roasted (death by fire and death of fire of the sun) and ritually eaten to represent the end of the harvest.

What is also interesting is that the song then proceeds to cumulatively add the same birds and animals listed in the Croatian wedding song. This shows that both ritual songs come from the same belief system and are directly linked to fertility of the Mother Earth...

Finally, we have "Grandma Has Sat Down to Dine", a well known humorous and somewhat bizarre song from Macedonia in a quick 7/8 meter. Its lyrics belong to a form in which every stanza has one more line than the previous. Through this additive process the tension, mystery or excitement build until the final "punch line".

Here is the text in Macedonian:

In this song talks about a grandmother with an insatiable appetite.

Here you can hear the rendition of this song by Brothers Teofilovic.

I believe that these customs show that Partridge was once regarded by South Slavs as the symbol of fertility.

O and here is another proof:

This is rock partridge (Alectoris graeca). 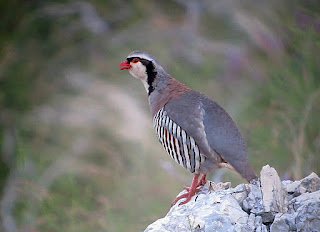 This bird, native in southwestern Asia and southeastern Europe, including Balkans, is in South Slavic languages known as "kamenjarka" (stone, rock bird). Kamenjarka, which is also a feminine noun, is also a archaic slang word for a whore, "young, hot (female) you fuck"...

I have seen somewhere long time ago that in Celtic parts of Iberia, loose women are called partridge, but unfortunately I can't remember where I saw this. If anyone has any info about this please let me know. Also if you know of any other folk belief system where partridge has the meaning linked to female promiscuity and fertility and with fertility of Mother Earth please let me know so that I can update my article.

So there you have it. The true love the song originally talked about was far from spiritual love. It was physical, fruitful love, the love that produces offspring. And the symbol of that fruitful love was partridge.

Also in Celtic and Serbian calendar, Samhain feast (held in the past by Baltic Serbs at the beginning of November) was the thanksgiving feast which people celebrated to thank their god for providing for them during the previous vegetative season. Listing all the animals people want to multiply, starting with partridge, the symbol of fertility, could be a kind of a magic spell, a way to symbolically ensure accumulation of riches...

But how old could this link between partridge and female fertility be? I believe very very old. I will talk about this in my next post.
Posted by oldeuropeanculture at 09:27