From knee to knee 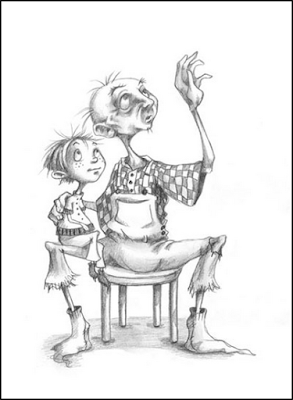 In this post I would like to talk about the word "knee" and the special meaning that this word has in Serbian and Irish language and culture.

The word knee has these meanings in English:

1, The joint or the region of the joint in the middle part of the leg between the thigh and the shank.
2. A piece of timber or metal formed with an angle somewhat in the shape of the human knee when bent. Any knee-shaped item or sharp angle in a line, "the knee of a graph", an inflection point.

In Celtic languages the words for knee are:

In Slavic languages the words for knee are:

A possible cognates are also:

But it is not just the root of the Celtic and Slavic words for knee that is the same. In Gaelic and South Slavic languages the word knee has additional meanings appart from the "joint in the middle part of the leg" and "something bent in a shape of a knee". These meanings are:

poklon - bending, bowing, gifting, gift
klanjati se - bend, bow, prostrate, kneel in front of someone
klečati - kneel
pokoljenje = Po + koljeno = generation
oni su iz istog kolena = They are from the same klan
on je od odlična koljena = He is from a great stock, clan
nakolenče - baby boy which is placed on the brides knees (lap) during the wedding ceremony to ensure that the first child is a boy.

Again we see strange similarity between the Slavic and Celtic languages and cultures.

What is very interesting about the above meanings of the word for knee in Celtic and Slavic languges is that this can shed a new light on the etymology of the Irish word "clann".

Serbian: Oni su iz istog "kolena" = They are from the same "clan"

This is all great except that we need to explain how the Slavic word koleno with its meanings fit into all this. Is it possible that the Irish words "clan" (children, family, offspring, followers) and "glúin" (generation, step in descent, step in pedigree) and the Serbian word "koleno, koljeno, koleno, kaljen, kalino, kolino, golino" (generation, step in descent, offspring, family, clan, race, house) all come from the same root "kln, gln" meaning knee? In this case "clan" would be just a specialisation of the word "glúin". We can see that in Serbian we have both koleno and golino, so it is possible that the Irish also retained both "k" and "g" variant of this word.

In Serbian we also have these words: član, čljan, člin, člen, čljen, šljen, Sijan, Síjén, cjen, iklân, ikljen. These are all dialectic versions of the same word  which means "member, part, generation" and are directly linked to the notion of group, family, clan. They all also come from the same "kln" root as "koleno" (knee, bend, generation, step in descent, offspring, family, clan, race, house).

What is interesting is that this link between the knee and the generation, step in descent, offspring, family, clan, race, house can also be found in Sanskrit, Ancient Greek and Latin:

I was just made aware that the same link exists in Basque, Finish and Saami languages too:

Basque: In Basque the word for generation (belaunaldi) is also formed with "knee" (belaun). It can be used directly with "belaun", too, as in "belaunez belaun" (from generation to generation)

Saami: The word for knee and generation is also the same in all Saami languages, cf. the phrase "Aerpien maahtoe boelveste boelvide" (ancestral knowledge from knee to knee/ from one generation to the next) in South Saami.


Finish: The semantics of 'generation' and 'knee' are also connected in Finnish (related to Saami). The word for generation, 'sukupolvi,' is suku (family) + polvi (knee), and the word for 'to descend from (genealogically)' is 'polveutua,' a verbalised form of the nominal 'polvi.' The verb is strictly used for genealogical descent, not physical descent of any kind.

But this link only becomes visible through Slavic and Celtic words for knee and their meaning.

But where does this link between the knee and generation, step in descent, offspring, family, clan, race, house comes from?

The English etymological dictionary says something interesting though about the etymology of the word genus. It says that there is a possibility that the etymology of this word could come "from Latin genu "knee," from a supposed ancient custom of a father acknowledging paternity of a newborn by placing it on his knee."

So is this where the link between the knee and the offspring, the next generation, family, clan, race, house comes from? In Irish the word clann doesn't mean any children. It means paternally acknowledged, legitimate children. Was this custom of acknowledging that the child is yours by placing it on your knee once widespread among the Indoeuropeans? I believe so. During the tribal expansions and wars a lot of men died. This left a surplus of "available" women both from the victorious tribe and from the subdued tribes. Judging by the current paternal genetic map of Evroasia, the victorious warriors used this situation to their advantage, having sex with as many of these women as they could. This was done partially out of lust, but mostly as way of claiming the dead warriors' property. The one who lay with a women laid a claim to her and her property. The final seal of ownership was stamped by the acknowledgement of the children produced from such unions. And that acknowledgement was done by father placing (laying) the child on his knees.

My offspring, my next generation, family, clan, race, my "koleno", "glún", "clan", "gens" are the the children that sat on my knees. I acknowledge them and I give them my name. And I take their property as mine too.

Another clue why there is a link between the knee and generation, step in descent, offspring, family, clan, race, house can be found in Serbian saying that the knowledge and tradition are passed "sa kolena na koleno". This literally means "from knee to knee" but it also means from one generation to the next generation, from grandparents and parents to their grandchildren and children.

This is the way the knowledge and tradition was passed in the past. And this is how the family bond was built and preserved.

After all these years, the stories that I heard while sitting on my parents' and my grandparents' knees are still as fresh and as clear as if I heard them yesterday. And the things that I learned from them as a child I still remember today. And when my son was born, I held him on my knees and I told him some of the old stories that were passed down to me through time "from knee to knee". And I added few new ones of my own. I hope one day he will have children of his own and will sit them on his knees and tell them some of the stories that he heard from me, and a lot of nice stories of his own...