The Census from Skadar region from 1485 and 1497, the medieval Serbian territory, today the border area between Kosovo, Makedonia, and Montenegro, lists all the personal names of the Serbian people living there for each village. You can see that Brajan, Rajan, Kola and Deda are very common medieval male Serbian names. But they are also Irish medieval male names Brian, Rian, Colla and Deda.

Ryan is a common Irish surname, as well as being a common given name. There are several possible origins for the surname. In certain cases it can be a simplified form of Mulryan. In some cases the surname may be derived from the Irish Gaelic Ó Riagháin (modern Irish Ó Riain), meaning "descendant of Rían"; or Ó Maoilriain "descendant of Maoilriaghain", or Ó Ruaidhín "descendant of the little red one". The old Gaelic personal name Rían is of uncertain origin. It may be derived from the Gaelic rí, meaning "king".

The Three Collas were the founders of the Kingdom of Airghialla.  They were the sons of Eochy Dubhlen and Alechia, daughter of Updar, King of Alba (Scotland).  Muireadach or Colla da Chrioch, meaning Colla of the Two Countries, Ireland and Alba, was one of three sons and the first King of Airghialla after their conquest of Ulster.  This new kingdom consisted of the modern Counties Monaghan, Armagh, and parts of Fermanagh, Louth, and Tyrone.

It appears that the legend of the Collas is true for it is documented in numerous sources and has held up to considerable scrutiny over the years. It also appears that they must have been incredibly talented at war, to have displaced the Ulaid, one of the most powerful of all the tribes in Ireland.

It is possible that they were disenfranchised Roman Centurions as their rise in Ireland were taking place at the same time that the Romans were slowly pulling out of Britain. The three brothers, or perhaps more correctly kinsmen, were Romanized Britons, originating in the tribe named Trinovantes, who when independent of the Romans had had their capital at Camulodunum or Colchester in southeastern Britain.  In Ireland their names were Carrell Colla Uais, Muredach Colla da Crioch (or fo Crioch, perhaps originally focrach, meaning mercenary), and Aed Colla Menn.  In the Roman naming system that they used, each had a personal name or praenomen (Carrell, Muredach, and Aed), a family name or nomen, Colla, and a descriptive name or epithet, a cognomen.  Their ancestors, who had become citizens of the Empire in 214 when citizenship was extended to all free subjects of the Empire, seem to have taken for their nomen some form of the root col, which was prominent in the vicinity of Colchester for many centuries.  Colla was not used as a personal name until about the year 1400, when the MacDonnell gallóglaigh of Connaught, aware of their descent from Colla Uais, began the practice, which soon was picked up by other descendants of the Collas, especially the McMahons, McDonnells of Clan Kelly in Fermanagh, and MacDonalds of the southern Hebrides.

Colla has no meaning in Gaelic.

Kola is a common medieval Serbian male name. What is very interesting is that the Book of Veles also mentions Kola as one of the military leaders of the Slavs:

Which means: And a lot of blood was spilled since then and huge splits happened within the Slavic nation over the division of land and fields on both sides of the river Don and all the way to the Carpathian Mountains. And there (on Carpathian Mountains), they elected Kola as their leader and he organized the resistance to the enemy and expelled them....

Deda mac Sin (Deda, son of Sen) was a prehistoric king of the Érainn of Ireland, possibly of the 1st century BC. Variant forms or spellings include Dedu, Dedad, and Dega. He is the eponymous ancestor of the Clanna Dedad, and may also have been a King of Munster.

Through his sons Íar mac Dedad and Dáire mac Dedad, Dedu is an ancestor of many famous figures from legendary Ireland, including his "grandsons" (giving or taking a generation) Cú Roí mac Dáire and Eterscél, "great-grandsons" (again) Conaire Mór and Lugaid mac Con Roí, and more distant descendant Conaire Cóem. A third son was Conganchnes mac Dedad. Through these Dedu is also an ancestor of several historical peoples of both Ireland and Scotland, including the Dál Riata, Múscraige, Corcu Duibne, and Corcu Baiscind, all said to belong to the Érainn (Iverni), of whom the Clanna Dedad appear to have been a principal royal sept.

Deda  has no meaning in Gaelic.

Brian (sometimes spelled Bryan) is a male given name of Irish and Breton origin, as well as a surname of Occitan origin. It is common in the English-speaking world. It is possible that the name is derived from an Old Celtic word meaning "high" or "noble". For example the element bre means "hill"; which could be transferred to mean "eminence" or "exalted one". One of the most famous Irish Brians was Brian Boru (c. 941 – 23 April 1014, Old Irish: Brian Bóruma mac Cennétig; Middle Irish: Brian Bóruma; modern Irish: Brian Bóroimhe) who was an Irish king who ended the domination of the High Kingship of Ireland by the Uí Néill. Building on the achievements of his father, Cennétig mac Lorcain, and especially his elder brother, Mathgamain, Brian first made himself King of Munster, then subjugated Leinster, eventually becoming King of Ireland. He is the founder of the O'Brien dynasty.

Here is a portrait of one of the medieval Serbian Brajans. This is the portrait fresco of the builder of the White Church of Karan, Župan Petar-Brajan. In his hands he holds the model of his church. The church was built between 1340 and 1342 ad. 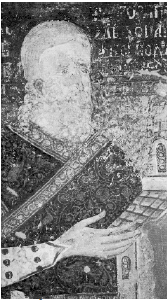 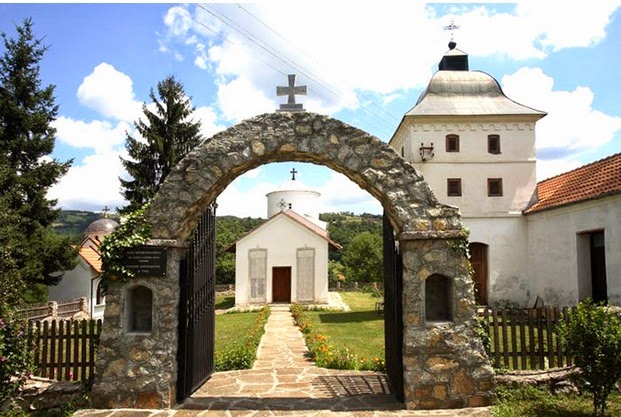 The church contains beautiful frescoes. The portraits of the founders, dressed in festive and rich noble attires are depicted on the north side of the western part of naos, while the portraits of Nemanjic Family are on the opposite side : Simeon Nemanja, St. Sava, King Milutin and the ruler of that time – King Dusan with his son Uros and wife Jelena /Helen/. Donors and all involved in the building of the White Church of Karan were also depicted. Monumental and well preserved fresco painting of the Bela Crkva Karanska (the White Church of Karan) represents significant monumental ensemble of the north western part of King Dušan’s state. This is one of the frescoes from the White Church depicting Župan Petar-Brajan on the right. 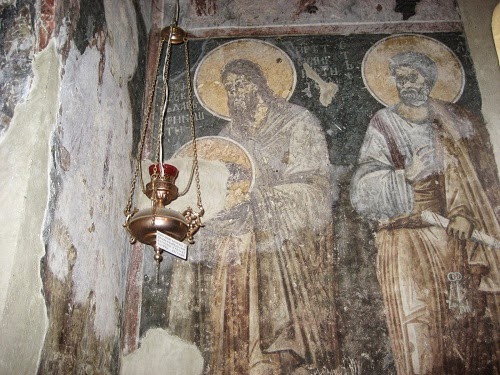 The White Church of Karan is one nave structure with the semi circular apse. It has the semi circle covering with the cupola on the circled base. The first built iconostasis painted with frescoes is preserved.

As I already said in my post about Bran, Balkans and the territory of the medieval Serbia in particular, was the Celtic Central for centuries before the Roman Conquest. If we look at the genetic, ethnographic and linguistic data, it seems that a lot of these "Balkan Celts" stayed on the Balkans and contributed to the ethnogenesis of the Serbians and other Balkan people. But considering that the origin and meaning of the Irish names Brian, Rian, Colla and Deda is uncertain, it is possible that the names actually originated in Central Europe and maybe even in the Balkans.