Cross between hockey and murder

The most popular sport in Ireland is Hurling. I don't mean puking. Although that is also quite popular.

Hurling (in Irish Iomànàìocht) is one of the fastest field ball games in the world.

Every team has 15 players: 1 goalkeeper, 6 backs, 2 midfielders and 6 forwards.

They use wooden flat sticks called "hurlies" (in Irish Camàn) which they use to hit a leather ball (in Irish sliotar). 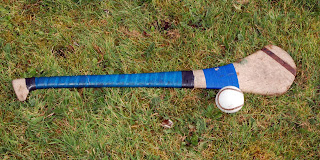 The players can catch the ball with their hands, carry it for not more than four steps, strike it in the air or on the ground with the hurley.

The objective is to pass the ball through the other team's goal in order to score (a goal is worth 3 points).

This game was once described as a "cross between hockey and murder". This is why: 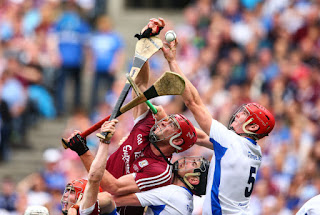 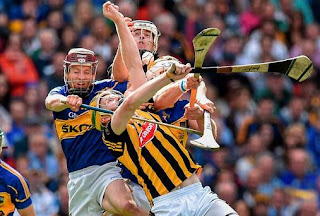 What these guys are trying to do is catch, with their bare hand, a hard leather ball, flying over 100km per hour, while the other guys around them are trying to hit it with a metal reinforced wooden battle axe like sticks. Broken fingers and hands are a common "minor" injury. Broken noses and split heads were also a regular occurrence before a metal helmets with wire face protector were introduced. 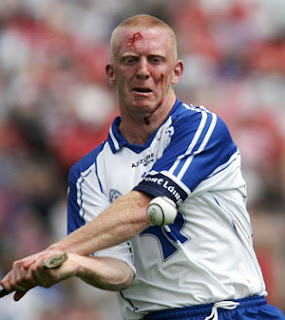 Originally players refused to wear the helmets and had to be forced to use them....

The history of hurling is very long, possibly stretching back over three millennia. Or longer. That is if we are to trust the dating in the Irish Annals.

The 13th/14th century tale Cath Mhaigh Tuireadh Chunga (The Second Battle of Moytura) describes a battle between the ancient tribes Tuatha De Danna and the Fir Bolg that took place at Moytura, County Mayo. At some point in the four day of the battle the Fir Bolgs took the time to challenge the Tuatha De Danann to a game of hurling, three times nine Fir Bolgs played against a similar number of Tuatha De Danann, many Tuatha were killed and a rock or cairn was erected on the spot where the hero had perished. The field where these rocks lay (only the foundation now remains) is called "The Field of the Hurlers".

This mythical match supposedly took place during the Bronze Age, in 1072 BC.

As I have shown in my article about the "Partholon and the great flood", and other articles about the early Bronze Age links between the Balkans and Ireland, the Irish Annals were pretty spot on when it came to dating events that happened in the 3rd millennium BC. This can be confirmed by archaeological evidence. So I have no doubts that their dating of the Second Battle of Moytura is also accurate.

Next we have the tale of the Táin Bó Cuailgne preserved in the 12th century manuscript but probably originating in the Irish Iron Age (500 BC – 400 AD). In it we find a description of the hero Cúchulainn playing hurling with his friends at Emain Macha.

Interestingly in the same epic we find a story about how Cúchulainn (whose original name was Setanta) got his nickname Cú Culann (the hound of Culann). Basically Setanta killed the hound belonging to the Culann the blacksmith by striking it with his sliotar (ball) which he hit with his Camàn (stick). To repay the debt to the blacksmith, Setanta offered to replace the hound and become himself Cú Culann (the hound of Culann).

This is not the only time when Cú Chulainn used his hurley to inflict violence on someone. It seems that hurley was used as a very effective weapon. In "Táin Bó Cúalnge Recension 1" we can read another story in which Cú Chulainn "...rose to his feet, and, striking off his opponent's head with his hurley, he began to drive the head like a ball before him across the plain..."

The following sequence of images makes it easy to see how a good hurler could be a very good close combat fighter. 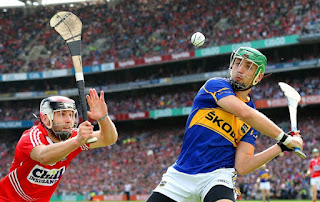 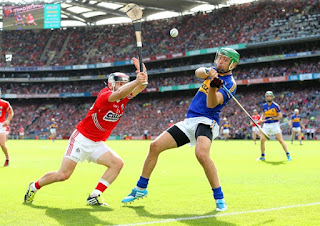 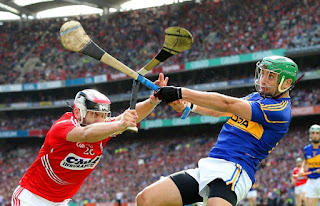 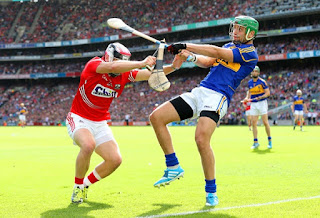 That hurling was indeed part of the martial arts training of the young Irish warriors during the Iron Age and Early medieval time, can be seen from tales which were told about Fionn Mac Cumhail and the Fianna, his legendary warrior band. Early references mention the "Fiancluichi" (Fianna games), a series of violent (stick and ball and other) games for aristocratic (and hence warrior) youths. More info can be found in "Shillelagh: The Irish Fighting Stick" by John W. Hurley.

Hurling, together with some 20 other stick and ball games is discussed in Brehon Law, the native Irish system of law, which developed from customs and which was passed on orally from one generation to the next until it was finally written down in the 7th century AD. The Brehon Law tract called "Meallbreatha" (Judgements related to games) lists rules and regulation related to stick and ball  games most of which resemble hurling.

In "Warriors, Legends and Heroes – the archaeology of hurling, in Archaeology Ireland" by Aidan O’ Sullivan, we read that:

Possible representations of hurling from early medieval time are found on two high crosses from Kells and Monsterboice, which date from 9th/10th centuries AD. On each of these crosses a biblical panel is depicted which illustrates David killing a lion with what appears to be a curved stick and ball. The killing instrument should in fact be a sling, but it appears that a hurley was chosen instead as it may have been more familiar to an Irish audience who used it as weapon. 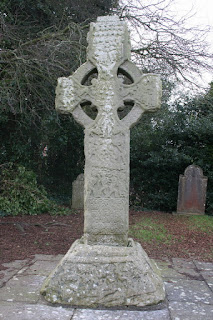 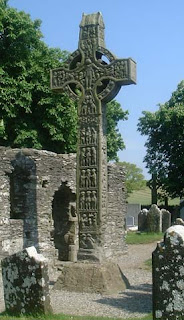 We also have records that hurling was still played in medieval Ireland.

13th century Statute of Kilkenny forbids hurling due to excessive violence, stating further that the English settlers of the Pale would be better served to practice archery and fencing in order to repel the attacks of the Gaelic Clans.

A 15th-century grave slab from Inishowen, County Donegal of a Scottish gallowglass (mercenary) warrior named Manas Mac Mhoiresdean of Iona, has carvings of a claymore sword, a camàn stick and a sliotar.

Now this slab is very interesting.

The camàn stick engraved on the above slab is much narrower than the modern hurling stick. This is why most people assume the stick is a shinty stick. But this is a photo of an actual hurling stick made of alder-wood, found in a bog at Derries, near Edenderry, Co. Offaly and radiocarbon dated to the 15th-17th century. It is currently held in the Folklife Collection of the National Museum of Ireland. It also is narrow.

The modern wide hurling stick only became standard in the late 19th century, when the rules of the modern game were first codified by the Gaelic Athletic Association.

This image from Folklife Collection book by Art O’Maolfabhail shows a range of hurleys from different parts of the country from the end of the 19th beginning of the 20th century. 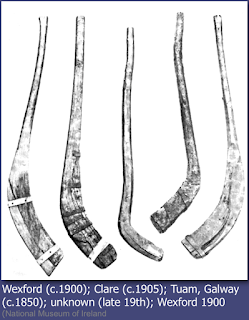 In the 1973 book "Caman 2,000 Years of Hurling in Ireland an Attempt to Trace the History and Development of the Stick-and-ball Game in Ireland During the Past 2,000 Years" by Art O Maolfabhail, we can read that prior to this rules codification there were actually two hurling traditions on the island of Ireland. In the north of the country a winter game, very similar to modern Scottish shinty, was played mainly on the ground with a narrow stick and a hard ball. The second form of the game, or Leinster hurling, was played with a broader hurley and a softer ball and was much more like the modern game. Players could pick up the ball, catch and strike it as well as soloing down the field. Although the GAA used both forms as an inspiration for the game it organised in the late nineteenth century, Leinster hurling had more of an influence in the evolution of the game.


So considering that the above slab is from the north of Ireland, the stick was probably used for playing the northern hurling.

In the post-medieval period hurling continued to prosper. Even the Anglo-Irish gentry were known to have organised big matches which drew large crowds.

In "A history of hurling" by S. J. King  we can read that in 1792, "a hurling match took place in the Phoenix Park’, Dublin in front of a vast 'concourse of spectators', with ‘much agility and athletic contention, until the spectators forced into the playing ground"

In "Flight from Famine: The Coming of the Irish to Canada" by Donald MacKay we can read that in 1827, a game at Callan, Co. Kilkenny was described like this: "It was a good game. The sticks were being brandished like swords. You could hear the sticks striking the ball from one end of the Green to the other"

Finally in 1881 the GAA (Gaelic Athletic Association) was formed, the game was standardised and the rest is, well a history.

In my next post I will talk about other stick and ball games and how they are related to hurling. Spoiler alert, I will try to explain why I believe that they all descend from Iron Age hurling.