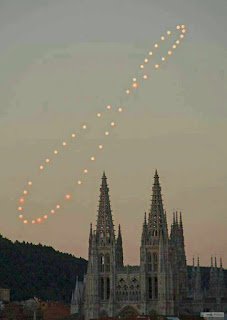 48 superimposed photos of the sun, taken during a year, one per week, in the same place and time, in the Cathedral of Burgos. The highest point is the summer solstice and the lowest is the winter solstice.

Understanding this phenomenon is the key to designing accurate sun dials.

Interestingly, the pattern, called analemma, which the sun traces in the sky is in mathematics known as the symbol of infinity. How very fitting that it is this pattern that emerges as a result of the never ending spinning of the solar wheel...