Yesterday while I was writing my post about Glavica cemetery, I had this nagging feeling of Déjà vu: calotte shaped isolated hill with many medieval graves dug into its sides. Protected from destruction and looting by a local taboo...

But by the time I have finished my article I still couldn't put my finger on it. So I published my article, went to have dinner, and then it hit me. Suddenly I knew where I had seen something like that before.

In my series of posts about the Early Bronze Age Montenegrian tumuluses, I wrote about a tumulus called Gruda Boljevića.

The reason why I believe that this tumulus is so important, is because it shows that the dolmen building, golden cross disc making culture which developed in Montenegro in the first half of the third millennium BC, has its direct cultural roots in Yamna culture of the Black Sea steppe. Why is this important? Because the gold cross discs found in this tumulus and other Montenegrian tumuluses are later found in Beaker culture sites in Ireland and Britan. And the Irish annals tell us that the Early Irish who brought with them metallurgy and gold migrated to Ireland from Russian steppe, via Balkans and then Iberia. Gruda Boljevića is the last and most important piece of evidence which confirms that the Irish annals contain not pseudo histories, but real histories which talk about events that happened in the 3rd millennium BC...

But Gruda Boljevića is also interesting in another way.

Tumuluses are well known archaeological features in Montenegro, which is why Gruda Boljevića was also assumed to be a prehistoric grave even before the excavation. The local legend says that two wedding parties met and fought and that the victims of this tragic fight were buried under the Gruda Boljevića tumulus. This type of legends is often linked to ancient burial type archaeological sites in Serbia, Bosnia and Montenegro. I already wrote about this type of sites in my post about wedding party graveyards. So it was assumed that Gruda Boljevića was one of such ancient burial sites. This assumption was conﬁrmed during building of a house south of the tumulus, when one of many medieval stone cist graves,  which were dug into the original bronze age tumulus was discovered. This is the plan of the Gruda Boljevića tumulus with the locations of the medieval graves in and around the tumulus. 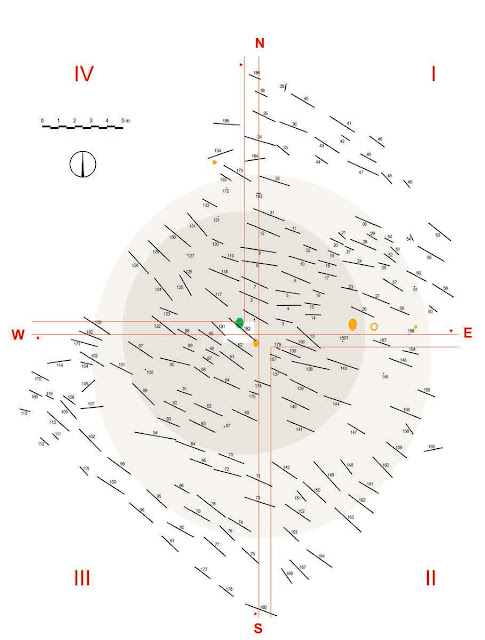 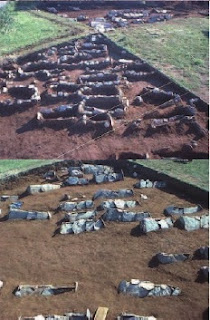 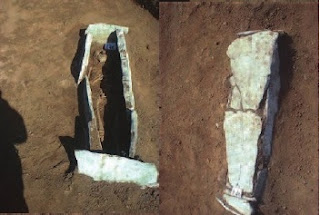 The skeletons found in these medieval graves date from the period 12-13th century. 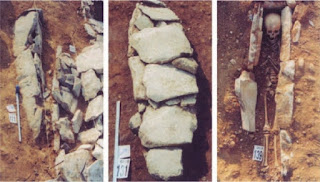 Graves were full of grave goods which show strong cultural links to both coastal regions of Montenegro and the inland regions of Serbia particularly the Morava valley. Here are some examples of the grave goods found: 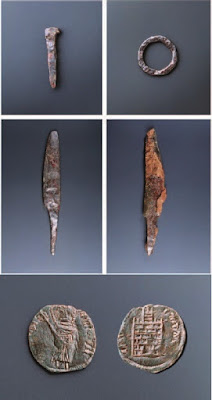 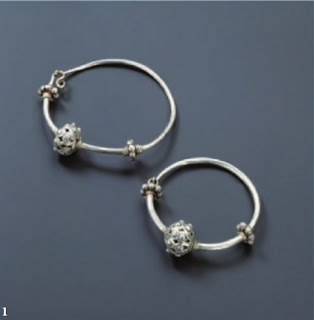 The above mentioned legend and knowledge of the existence of the graves, saved the mound from destruction, which was not the case with other mounds which allegedly existed nearby. You can find additional information and detailed description of the tumulus in the article entitled "Podgorica praistorijske humke i srednjovjekovne nekropole Gruda Boljevića".

Gruda Boljevića tumulus had an irregular shape and had a diameter of 24 m.

Now have a look at this satellite picture. It shows the location of the Glavica hill cemetery. 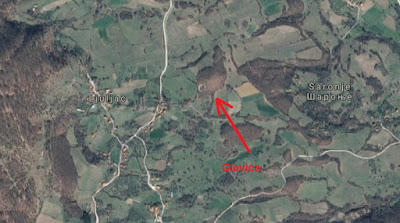 You can see an isolated perfectly circular hill covered in oak forest. The bottom left is the fenced off area with the new cemetery and the chapel. 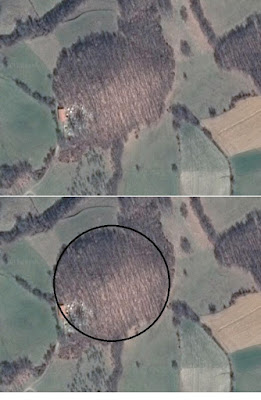 This is the side view of the hill. You can see that it has flat calotte shape typical of tumulus hills. 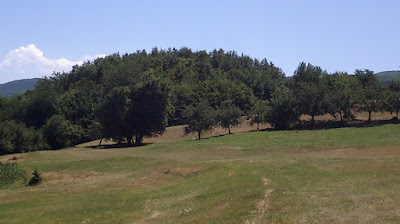 So the big question is: is Glavica hill a tumulus, which was, just like Gruda Boljevića, reused as the burial ground during medieval time?

Here is a picture of the graves near the summit of the hill with the holy oak and the altar: 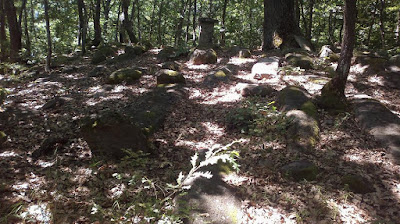 Is it possible that all these graves are dug into the side of the tumulus?

And finally, if Glavica hill is a tumulus, what period does it date from? If it is from the Early Bronze Age, like all the other tumuluses I wrote about in my series about Montenegrian tumuluses, then we should expect a central cist grave with additional secondary Bronze and Iron Age burials dotting the hill hidden among the later Medieval ones. If however this tumulus is from the Late Bronze age, or Iron Age, then it could, potentially, hide a spectacular untouched huge burial chamber of someone very very important.

But as I already said in my post about Glavica cemetery, there is no money or will or interest to do any additional excavation on the site.

I want to thank my friend Aleksandar Tešić for this picture of the Glavic hill and for the additional pictures of the actual graveyard inside the forest.
Posted by oldeuropeanculture at 02:20