The riddle of Odin's ravens 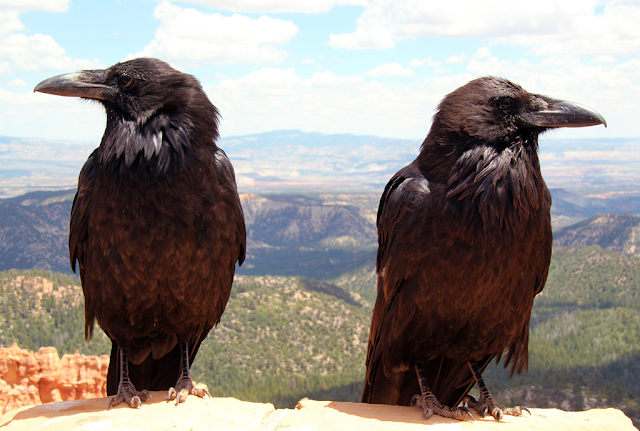 Odin had two ravens named Huginn (Old Norse “thought”) and Muninn (Old Norse “mind”). Every day, Odin would send them out at dawn, and the birds would fly all over the world before returning at dinner-time. They would then tell Odin everything they saw and heard. It is said that this is the reason why one of Odin's names was “raven-god” (hrafnaguð).

In the Poetic Edda sonnet Grímnismál, the god Odin (camouflaged as Grímnir) tells Agnarr, the young son of King Geirröðr a very strange thing about his two ravens. I include here four different translations of the stanza in question so that you can get better feeling for what Odin is saying.

1797 Amos Simon Cottle in Icelandic Poetry “The Song of Grimnir”

Hugo, in azure fields of air,
And Mumin too each day appear:
I fear lest Hugo safe return,
But more for Mumin inly mourn.

Huginn and Muninn, over the fields of earth
Fly daily; fear creepeth upon my soul,
Of Huginn, lest he come not faithfully;
But of Muninu I have greater fear than this.

Hugin and Munin
fly each day
over the spacious earth.
I fear for Hugin,
that he come not back,
yet more anxious am I for Munin.

Thought and Mind [his two Ravens] fly every day over the mighty earth
I fear for Thought lest he never come back, but I am still more fearful about Mind. . . .

Scholars have been wondering for a long time about the meaning of the above verses.

Rudolf Simek is critical of the approach, stating that "attempts have been made to interpret Odin's ravens as a personification of the god's intellectual powers, but this can only be assumed from the names Huginn and Muninn themselves which were unlikely to have been invented much before the 9th or 10th centuries" yet that the two ravens, as Odin's companions, appear to derive from much earlier times.

Anthony Winterbourne connects Huginn and Muninn to the Norse concepts of the fylgja—a concept with three characteristics; shape-shifting abilities, good fortune, and the guardian spirit—and the hamingja—the ghostly double of a person that may appear in the form of an animal.

Bernd Heinrich theorizes that Huginn and Muninn, along with Odin and his wolves Geri and Freki, reflect a symbiosis observed in the natural world among ravens, wolves, and humans on the hunt. He proposed that the Odin myth was a metaphor that playfully and poetically encapsulates ancient knowledge of our prehistoric past as hunters in association with two allies to produce a powerful hunting alliance. It would reflect a past that we have long forgotten and whose meaning has been obscured and badly frayed as we abandoned our hunting cultures to become herders and agriculturists.

I believe that the above stanza is a riddle, a koan, which was used for teaching the novices about the difference between Thought and Mind. The fact that Odin has two ravens called thought and mind is already very significant. Most people equate thought, thinking, the thought machine and mind. But interestingly mystics all over the world, since the beginning of time have been trying to tell us that the truth is exactly the opposite. Thought, thinking, thought machine and mind are two different things independent of each other. Odin is trying to tell us the same.

But how are we to understand Odin's worry that his ravens will not return. John Lindow is partially correct when he relates Odin's ability to send his "thought" (Huginn) and "mind" (Muninn) to the trance-state journey of shamans. Only the Muninn's flight is a metaphor for the meditative process. Huginn's flight is a metaphor for the thought process. Lindow says the Grímnismál stanza where Odin worries about the return of Huginn and Muninn "would be consistent with the danger that the shaman faces on the trance-state journey." But actually I believe that Odin is not worried. It is a riddle. He is opposite from worried. He is hoping that the ravens will not return.

The reason why scholars are still wondering what the meaning of the above stanza is, is because they are not vikings.

Ravens were used by Vikings to determine if there was a land ahead during their long voyages across the open sea. They carried ravens with them in cages. When they found themselves far away from the shore, and didn’t know which way to go, they would set a raven free. Raven would fly high in the air and then start flying in circles searching for land in the distance. Because ravens can't land on water, if the raven could not see a land, he would return to the ship. But if the raven saw land in the distance, it would fly straight for it. All the Vikings had to do is follow the raven. So raven acted as a guide, which guided Vikings through the unknown and uncharted waters to a safe haven. Which means that raven must be directly related to the idea of a guide, leader, just like Odin, Wodan whose name actually means Guide, Leader. You can read more about it in my post called "Odin the wandering deity".

As I said already it is very important that there are two ravens of Odin. Thought and Mind. They are two ravens which each of us can use to search for the way forward through the unknowable future. Most people only ever use Thought. This is because they are not even aware of the existence of the other raven, Mind because they think that Thought and Mind are one and the same. That mind is a sum of our thoughts, rather than a completely separate entity. This is a pity because all the mystics in the world throughout the history have been telling us that it is the mind, clear of all thought, the mind of no mind, which gives us the true vision, the true sight. The sight that reaches much further in space and time then our thoughts would ever be able to reach. And this is exactly what Odin is telling Agnarr. Odin says that although there is a possibility that thought might not return, he is more anxious about Mind not returning than thought. What this actually means is this:

It might be possible to use your thought to successfully guide you through life. This is symbolised  by Odin's fear that Hugin, Thought, might not come back. As I have already said, raven Thought would not come back only if it had found the way (Tao) through life which you can follow. But Odin says, that he is more worried about the Muninn, Mind, not returning. This means that Odin thinks that raven Mind, mind empty of thought, the opposite of thought, is more likely to find you the way (Tao) through life which you can follow. This is, I believe, the message Odin was trying to convey to Agnarr and everyone else.

And so, I believe, the riddle of Odin's ravens is solved. A fitting message from the God whose name means Guide, Leader. What do you think?
Posted by oldeuropeanculture at 14:54