The flooding of the Nile is the result of the yearly monsoon between May and August causing enormous precipitations on the Ethiopian Highlands whose summits reach heights of up to 4550 m. Most of this rainwater is taken by the Blue Nile and by the Atbarah River into the Nile, while a less important amount flows through the Sobat and the White Nile into the Nile. During this short period, those rivers contribute up to ninety percent of the water of the Nile and most of the sedimentation carried by it, but after the rainy season, dwindle to minor rivers. 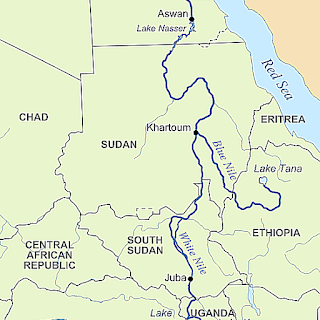 Apparently, these facts were unknown to the ancient Egyptians who could only observe the rise and fall of the Nile waters. The flooding as such was foreseeable, though its exact dates and levels could only be forecast on a short term basis by transmitting the gauge readings at Aswan to the lower parts of the kingdom where the data had to be converted to the local circumstances.

The Egyptian year was divided into the three seasons of Akhet (Inundation), Peret (Growth), and Shemu (Harvest). Akhet covered the Egyptian flood cycle. This cycle was so consistent that the Egyptians timed its onset using the heliacal rising of Sirius, the key event used to set their calendar.

The first indications of the rise of the river could be seen at the first of the cataracts of the Nile (at Aswan) as early as the beginning of June, and a steady increase went on until the middle of July, when the increase of water became very great. The Nile continued to rise until the beginning of September, when the level remained stationary for a period of about three weeks, sometimes a little less. In October it often rose again, and reached its highest level. From this period it began to subside, and usually sank steadily until the month of June when it reached its lowest level, again. 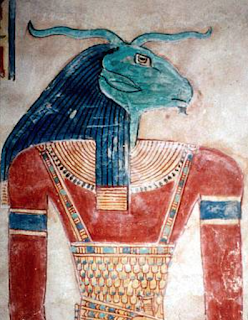 Khnum was one of the earliest-known Egyptian deities, originally the God of the source of the Nile. In art, Khnum was usually depicted as a ram-headed man holding a jar from which flowed a stream of water. 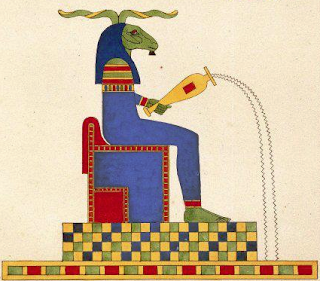 I particularly love this depiction of Khnum, with water pouring out of a snake mouth. As I explained in my post "Apep", snake is the symbol of the sun's heat, the symbol of the sun's fire, which swallows the water (moisture). And here the snake seems to be offered to Khnum  as a sacrifice. At the same time Khnum is holding the Was staff (the weapon that kills Apep, The Dragon, The destroyer of life) and Ankh (symbol of life).  A very very interesting relief. If anyone knows where this relief is and if you have the full image, please let me know. 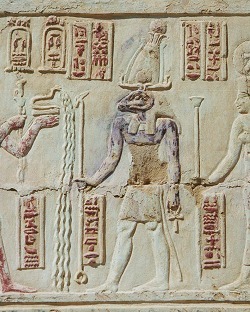 Since the annual flooding of the Nile brought with it silt and clay, and its water brought life to its surroundings, he was thought to be the creator of the bodies of human children, which he made at a potter's wheel, from clay, and placed in their mothers' uteruses. He later was described as having moulded the other deities, and he had the titles "Divine Potter" and "Lord of created things from himself". So he was also depicted working at a potter's wheel, with recently created children's bodies standing on the wheel...

The horizontally twisted horns show that we are dealing with a ram of the species "ovis longipes palaeoaegyptiacus". 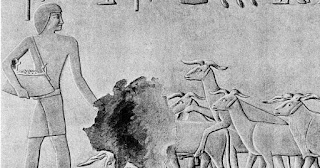 This was the earliest type to be domesticated in Egypt, but became extinct sometime in the New Kingdom. Nevertheless, the shape of the horns was preserved even in later depictions of Khnum.

Now this type of sheep is a bit of a mystery. There are two thing you can find about its origin.

I don't know if any genetic analysis was done on the remains of "ovis longipes palaeoaegyptiacus", or if such remains were ever found.

Now interestingly the main lambing period for muflon sheep is beginning of April to mid May. I have already talked about the correlation between the position of the Ares (ram) zodiac sign and the main lambing season for wild Eurasian sheep in my post "Ram and Bull".

So the chance is that the main lambing season of the "ovis longipes palaeoaegyptiacus" was also falling in Aries. And coincidentally the Monsoon which causes the inundation of the Nile starts right after that, in May.

Do you think that this is why Khnum, the God of the source of the Nile, has a head of the "ovis longipes palaeoaegyptiacus" ram, the only type of ram Egyptians knew when they created Khnum as a symbol???

Well I just found this representation of Khnum, harvesting wheat. 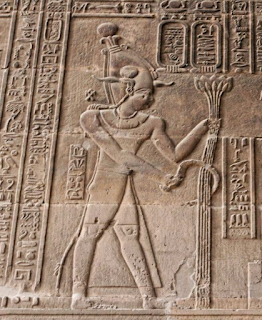 Harvest time in the Nile River Valley occurred between April and June, depending on the weather. So the harvest also starts after Aries (Ram) ends.

Since I wrote this article, I came across this picture: 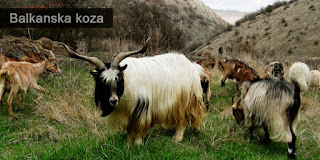 This is Balkan goat, direct descendants of wild goats. It has horizontal horns. And it's kidding season ends in April...We don't have any data for the ancient Egyptian goats, but I would bet that they also delivered their young right before the rain season, the season of plenty....
Posted by oldeuropeanculture at 14:00