A game was recorded as taking place on February 26, 1297, in Loenen aan de Vecht, where the Dutch played a game with a stick and leather ball. The winner was whoever hit the ball with the least number of strokes into a target several hundred yards away. This game was also recorded in subsequent centuries as being played by the Dutch under the name of kolf, kolven. The game is widely accepted as the precursor of modern golf.

Historians try to classify medieval games as either forms of ‘hockey’ or otherwise ‘golf’ from a modern perspective, but other than ‘hockey’ players battling with each other to get to the ball and ‘golf’ players taking turns to hit it, the histories of the two games probably overlap far more than one might imagine from seeing them played today.

That this is true can be seen from these games.

In France, as early as 1426 a letter mentions the game of ‘longue boule’ in which players had to hit a ball from village to village "with the fewest strokes of the wooden ball".

In the 16th century in the counties of Devon and Wiltshire, southwestern England, bandy (Welsh and English version of the Irish Hurling that I wrote about in my post "The invasion of hurlers") was played on Palm Sunday, though in these areas the game was played differently. There, boys and men would try to get the ball up a hill, instead of towards a goal.

We find the same type of competition in Ireland. Poc Fada is Irish for "long puck". An All-Ireland Poc Fada Championship is held annually testing the skills of many of the top hurlers.

Competitors must puck a sliotar with a hurley (they may lift and strike or hit the ball from the hand). They play to the top of Carn an Mhadaidh and after a short break continue back down to finish in Aghameen. The whole course measures over 5 Km. 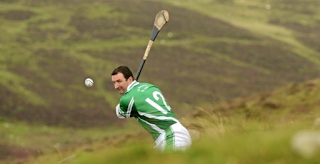 The concept of the competition originates in the Irish legend of "Táin Bó Cuailgne" when Cúchulainn, who as the boy Setanta set out from his home to the King's court at Emain Macha hitting his sliotar before him and running ahead to catch it.

I don't know if this type of game was played in Ireland before 1960 when the Poc Fada Championship was instituted.

In Ireland there is also a game called "road hurling". 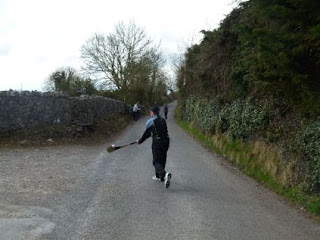 It is a team sport, played by two teams each consisting of three players. Each member of the team takes turn in striking the ball as far as possible along the pre specified route from the place where the ball landed previously. The team that covers the distance with the least number of strikes wins. The detailed rules can be found on "Kinvara road hurling rules" page. Again I could not find any information about how old this game is.

I would love to know what is the earliest recorded game of "long puck" type of hurling in Ireland. The earliest mention of anything similar is found in the Táin Bó Cuailgne, which was preserved in the 12th century manuscript, but probably originated in the Irish Iron Age (500 BC – 400 AD). This predates all the other description of any similar game. The origin of the all the other western and northern European curved stick and ball games can be traced to the Irish hurling. So I would expect that the long puck is also ultimately an Irish invention which spread to Europe during Middle Ages. But I might be wrong.