Were the first pots made by plastering inside or outside of baskets with clay or plaster and then letting the whole thing dry in the sun? The result would have been a strong container useful for storing dry goods like acorns or grains or nuts.

Putting this plastered basket into a fire would burn the basket off and would produce ceramic vessel which would have "basket or cord like" imprints on the side where basked used to be...

This kind of "pot" would be a very good cooking vessel for cooking acorn porridge, fish and shellfish soups and bone marrow soups.

Do we have any proof that this theory could be correct?

Well actually could do

"The Advent and Spread of Early Pottery in East Asia: New Dates and New Considerations for the World's Earliest Ceramic Vessels" by David J. Cohen discusses recent data from North and South China, Japan, and the Russian Far East and eastern Siberia on the dating and function of early pottery during the Late Pleistocene period.

"...Early pottery typically appears in contexts that, except for containing small amounts of pottery, are otherwise similar to Late Paleolithic sites. There is also no evidence of plant cultivation, so clearly in eastern Asia, the old view of pottery's emergence or dispersal as only coming within agricultural societies is no longer viable. Greater consideration needs to be given to the invention and spread of pottery in hunter-gatherer societies...

In Japan, undecorated Incipient Jōmon pottery with Mikoshiba-type lithics are found in the initial phase of pottery making (Ōdai Yamamoto I, Kitahara, and Maeda Kōji sites, dating ca. 16,500-13,500 BP). Decorated pottery (Phase 2) begins ca.15,700 cal BP during the Bølling-Allerød warming period and rapidly disperses across the archipelago at a time when there may have been significant changes in subsistence and mobility patterns.

...Russian “Initial Neolithic” early pottery sites, such as Khummy, Gasya, and Goncharka 1 in the Lower Amur River basin, are transitional between Paleolithic traditions and typical Neolithic sites of the Holocene, with pottery and ground stone tools gradually appearing amongst Upper Paleolithic toolkits. As in China and Japan, early pottery production is at a very low scale, with only limited quantities of sherds being found at a few sites. Eastern Siberia early pottery is first present at the Ust’-Karenga 12 site ca. 13,000 cal BP. Pottery may have dispersed westerly across Siberia as forested areas expanded, perhaps resulting in the introduction of pottery into Europe by hunter-gatherer groups..."

Yuchanyan and Xianrendong Caves are located in South China. Pottery fragments found in these caves have been confirmed to be 18,000 - 20,000 years old, making them the oldest known pottery in the world.

The caves were occupied from Upper Paleolithic to Neolithic times. The findings from the caves show that the people who lived there were primarily fishermen hunters gatherers, although some evidence for early rice domestication has been noted within the Early Neolithic occupations.

"...A total of 282 pottery sherds were recovered from the oldest levels. They have uneven thick walls between 0.7 and 1.2 centimetres, with round bases and inorganic (sand, mainly quartz or feldspar) temper. The paste has a brittle and loose texture, and a heterogeneous reddish and brown colour which resulted from uneven, open air firing. Forms are mainly round-bottomed bag-shaped jars, with rough surfaces, the inner and outer surfaces sometimes decorated with cord marks, smoothing striations and/or basket-like impressions. They appear to have been made with two different techniques: by sheet laminating or coil and paddle techniques..." 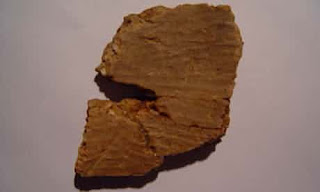 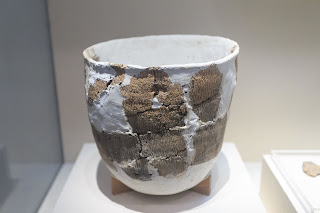 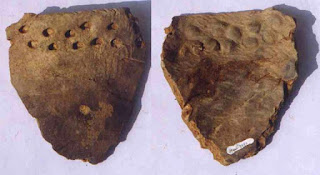 Around 15,000 years ago, in the Northern islands of Japan, lived the Jomon people. Thought to be the forebears of the Ainu people, the aboriginal Japanese of the North, the Jomon were among the very first "sedentary" peoples of the world.  They lived primarily on a diet of fish from the ocean, wild deer and boar which they caught in pit-traps, had a plentiful supply of acorns, nuts and seeds.

Taishō site No. 3 site is located in the southern portion of the Tokachi plain, atop a terrace overlooking the Tobetsu river, a branch of the Tokachi river flowing across the plain, in the eastern part of Hokkaido. Artifacts and features of the Jōmon period were found, starting with artifacts from the Incipient Jōmon, and including pit dwellings of the microlithic culture of the Early Jōmon, plus graves from the final portion of the Early Jōmon. This is the first discovery of a site dating from the Incipient Jōmon in Hokkaido.

Approximately 400 potsherds were recovered, an amount thought to represent more than ten individual vessels. Of these, it is possible to reconstruct the vessel shape for about five items. It appears that all had nipple-like projections at the bottom. The designs include cord impressions and puncture marks of various types including tsumegatamon, and some also have raised belts applied to the surface. 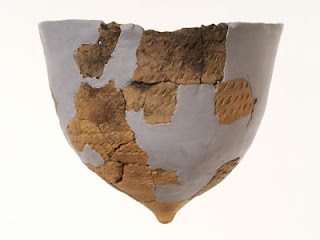 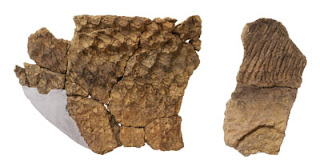 In "A comparative perspective on the ‘western’ and ‘eastern’ Neolithics of Eurasia: Ceramics; agriculture and sedentism" by Kevin Gibs and Peter Jordan, we can read that "pottery on Taishō site was dated to around 15,000 - 13,800 cal BP

Now here are some complete Jōmon pots. Look at the "basket like" impression on the outside wall. 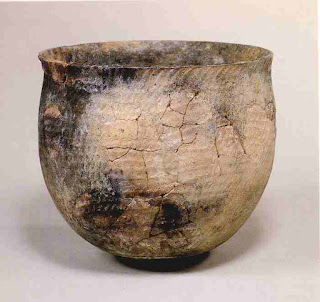 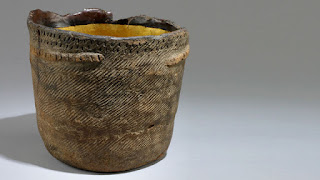 On the "BBC The history of the world in 100 objects: Episode Transcript - Episode 10 - Jomon Pot" we can read that:

"...This Jomon pot is an extremely important pot. It's pretty underwhelming to look at - in fact it's quite dull. It's made of brown-grey clay, a simple round pot about the size of the bucket that children play with on the beach, about six inches high, six inches across at the top, and its got it's got straight sides and a flat base, and it was made about seven thousand years ago in Japan.

When you look more closely, you can see that it was built up with coils of clay and then, into the outside, fibres have been pressed, so that when you hold it, you feel as though you are actually holding a basket. It looks and feels like a basket in clay.

The basket - like markings on this and other Japanese pots of the same time, are in a cord pattern and that's in fact what their name is in Japanese. They are Jomon - or 'cord-pattern' pots. And the word Jomon has come to be used not just for the objects, but for the people that made them, and even the whole historic period in which they were lived. It was the Jomon people living in what is now northern Japan, who created the world's first pots..."

The most interesting sites containing early ceramics In Russian Far East were discovered in the lower Amur River region.

The pottery was found at the Khummi site, dating to 14,300, Gasya site dated to 14,050 BCE, and Goncharka site dated to 13,400 BCE. These people were hunter gatherers who depended on salmon.

"On Early Pottery-Making in the Russian Far East" by Irina Zhushchikhovskaya talks in detail about the way the pottery from these sites was made.

"...The ceramic was made from paste consisting of clay with nonplastic mineral inclusions (quartz, feldspar) and plant fiber temper. The last is identified by long, rough impressions on the surfaces and in the cores of sherds. In some cases the plant fibers are not burned out completely and are thus carbonized. The ceramic samples are very fragile and weak. The walls of the sherds are uneven and thick. The forming method cannot yet be reconstructed with any precision. I have hypothesized that some kind of moulding or a paddle and anvil technique was used because of impressed basketlike patterns on the outer surface of one vessel...

...The surface of these ceramic samples is unslipped and rough. The outer surface of the simpler vessel has a basketlike impressed pattern. There are deep vertical grooves crossed in some places by horizontally oriented grooves. Previously, impressions were interpreted as the traces of processing by a toothed rough tool (Derevyanko and Medvedev 1994). In my view, the morphology and crosslike pattern of the grooves suggest that they were produced by a tool similar in structure to the basketry impressions... 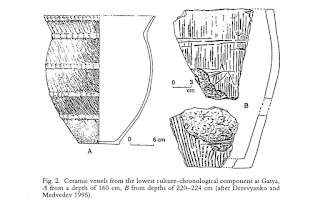 White ware is a crumbly form of proto-pottery dated to 9th millennium BC and commonly found in PPNB (Pre pottery neolithic B) archaeological sites in Syria such as Tell Aswad, Tell Abu Hureyra, Bouqras and El Kowm. Similar sherds were excaveated at Ain Ghazal in northern Jordan. It was made by pulverizing limestone, then heating it to a temperature in excess of 900 °C. This turns limestone to quick lime. This reaction takes place at 900 °C, but a temperature around 1000 °C is usually used to make the reaction proceed quickly. This basically means that it was dropped into a burning campfire. In most instances, campfire temperatures generally average 900 °C but depending on the shape of the hearth the temperature can go over 1000 °C. The average temperature of a campfire tends to vary based on the size of the campfire, with smaller campfires often producing less heat than larger ones. Lime was then mixed with ashes, straw or gravel and made into a white or grey lime plaster. The plaster was initially so soft that it could be moulded, before hardening through air drying into a rigid cement. The plaster was formed into vessels by coiling to serve some of the functions of later clay pottery.

In the "Barley, malt and ale in the neolithic" by Merryn Dineley we can read that "Imprints of basketry on the exterior of some vessels suggest that some were shaped into large basket shapes". It is possible that all were made by plastering the inside of a basket and then shaking and removing the basket leaving the basket shaped plaster vessel. The basket imprints could then be left or removed by scrubbing and polishing.

In "White ware – Near Eastern plaster container" by Bonnie Nilhamn we can see one of these plaster pots (containers) which literally looks like a plaster basket. 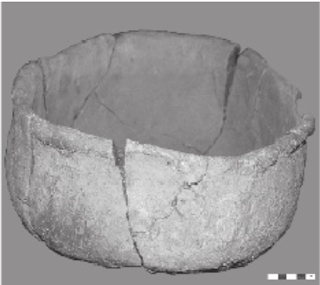 And on another picture we can clearly see the basket imprinted on the basket outside wall. 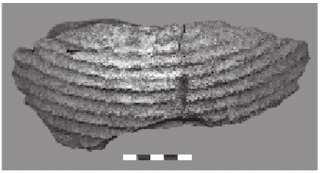 In USA the best example of this basket imprint pottery is Anasazi pottery which was probably made by plastering the inside of baskets with a layer of clay and then baking the whole thing in a fire. This would have left a distinct basket pattern on the outside of the pot.

This is an Anasazi basket: 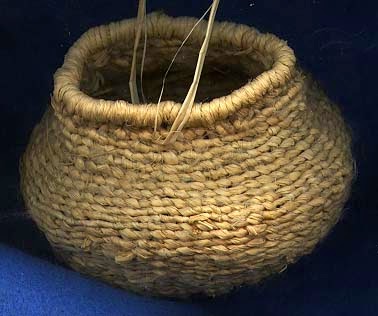 And these are Anasazi pots. Do you see the similarity? 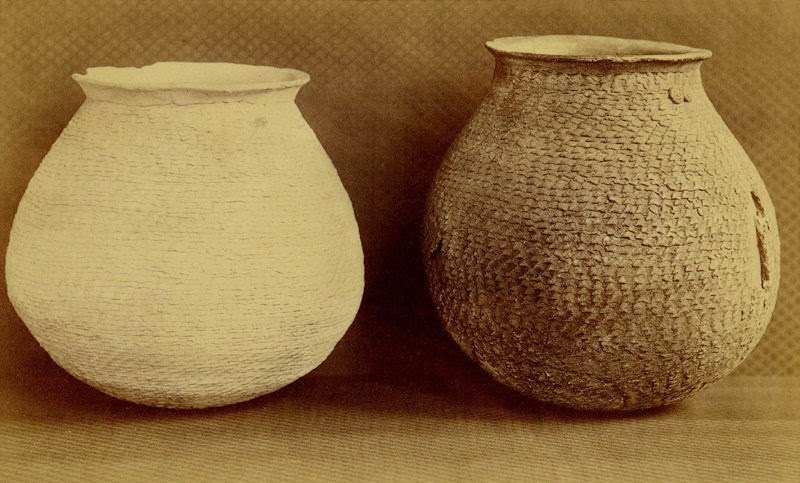 "...Anasazi pottery is distinguished from that of other Southwestern culture areas by its predominant colors (gray, white, and red), a coil-and-scrape man­ufacturing technique, and a relatively independent stylistic trajectory. Specu­lation about its origin has centered around diffusion from Mogollon and ultimately from Mesoamerican cultures to the south, but the stark contrasts between Mogollon brown and Anasazi gray and white pottery have also raised the possibility of independent invention through accidental burning of clay-lined baskets..." 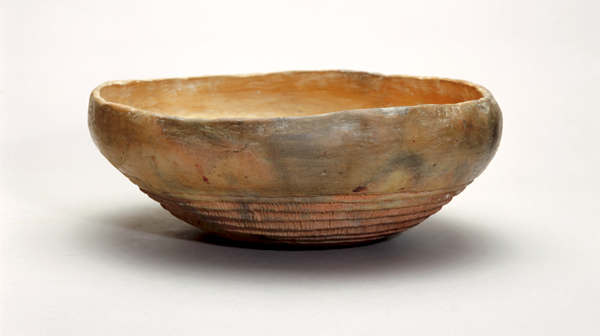 On the same page we can also read that Stewart Peckham has identified some of the earliest Southwest "protopottery" as basket liners, "pressed in coiling fashion into the interiors of shallow, coiled baskets"...

"...Peckham cites pottery examples that have a clear exterior impression of a basket, have no burnishing and seem to have been baked or fired, possibly in an open campfire. For this pot, it seems as if the damp clay vessel was pressed into a basket, and the imprint of the basket's texture remained. While Peckham supposes that the ancient basket liners might have been used as patches to extend the use of a worn basket, or as seed parching trays, he concludes, "Whatever their functions, the basket liners give the impression of being crude attempts to imitate the pottery that early Indians in the Southwest may have seen but did not know how to replicate"..."

So what do you think about this?
Posted by oldeuropeanculture at 15:11