The city of cockerels 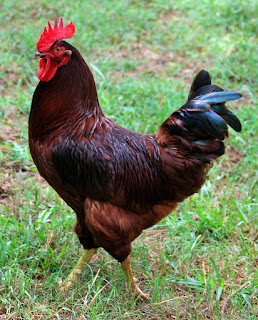 The history of chickens (Gallus domesticus) is still a bit of a puzzle. Scholars agree that they were first domesticated by mixing two wild bird species from southeast Asia: 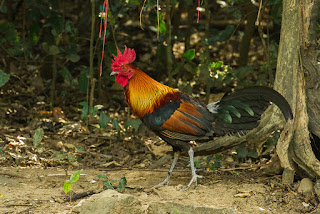 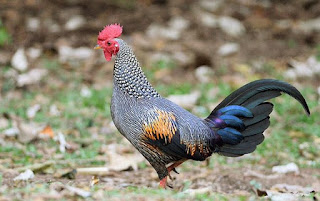 However where that domestication exactly happened and when is still unanswered question.

The earliest possible domestic chicken remains are from the Cishan site (5400 BC) in northern China, but whether they are domesticated is controversial. Firm evidence of domesticated chickens isn't found in China until 3600 BC.

Recent research suggests that there may have been multiple domestication events in distinct areas of South and Southeast Asia: southern China, Thailand, Burma, and India.

In India we have evidence that wild chicken have been used by people in the Indus Valley region since 5000 BC. The first archaeological evidence (chicken bones) belonging to the domesticated chickens appear at Mohenjo Daro by about 2000 BC. It is believed that it is from there that the chicken spread into Europe and Africa.

Now I believe that chicken domestication probably occurred in Mohenjo Daro a bit earlier than 2000 BC. Here is why:

Built around 2500 BC, Mohenjo Daro was one of the largest settlements of the ancient Indus Valley civilization, and one of the world's earliest major cities, contemporaneous with the civilizations of ancient Egypt, Mesopotamia and Minoan Crete. Mohenjo daro was abandoned in the 19th century BC as the Indus Valley Civilization declined.

Recently I came across a paper entitled "Akam and Puram: ‘Address’ Signs of the Indus Script". It was presented by Iravatham Mahadevan in 2010 at the International Tamil Conference. In his paper he announced the identification of a frequent "opening" sign in the Indus texts. 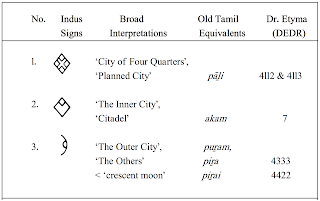 He based his identification on the fact that identical symbols are known from Ancient Egypt: 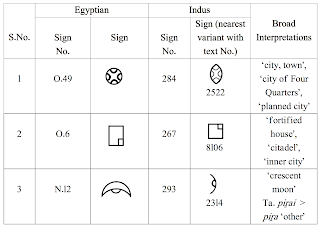 This does open the question about the cultural connection between these two ancient civilisations. But this is not why I am mentioning this article.

Another thing that Iravatham Mahadevan discusses in his article is the original name of Mohenjo Daro.

Many seals with cock symbols were discovered in Mohenjo Daro. Here are just two of these seals: 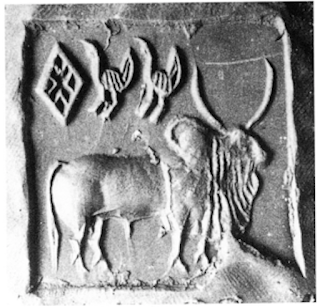 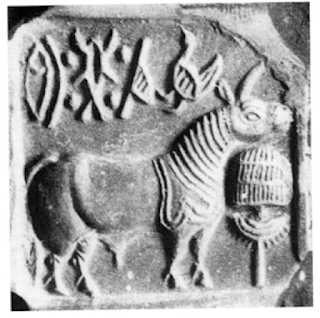 Because of the repeated occurrence of cocks in the seals, it is fair to assume that cocks played an important role in the city and its culture.

Now in Sanskrit the word for "Cock, Cockerel" is कुक्कुट (kukkuTa)

Why is this important? Because of this:

Thomas Burrow, who was an Indologist at the University of Oxford, published various books and papers in the field of linguistics and Indology. In his paper "On the significance of the term arma-, armaka- in Early Sanskrit Literature", published in Journal of Indian History XLI, Pt. I (1963) : 159-166, he published the list of all the places found in Sanskrit literature which end with "arma", "armaka". As we can see in "A Sanskrit-English dictionary, etymologically and philologically arranged, with special reference to Greek, Latin, Gothic, German, Anglo-Saxon, and other cognate Indo-European languages" published by Monier-Williams, Monier, Sir, 1819-1899 we can see that the Sanskrit words "arma", "armaka" mean "ruins of a village, town":

Thomas Burrow postulated that the place names ending with "arma", "armaka" are the names of ancient cities which were destroyed either by advancing Arians or were already lying in ruins when the Arians arrived.

It is safe to assume that most of the ruined cities mention in ancient Sanskrit literature must have belonged to the Indus Valley Civilization – because at the time of writing these ancient texts, most of the Indus Valley Cities must have been in a ruined state – and also at the time of writing these texts there were no Vedic cities in such ruined state.

Based on all this, Iravatham Mahadevan concluded that the name of Mohenjo Daro, during the Indus Valley Civilization times, was probably "Kukkut arma" i.e. "City of cocks, cockerels".

Now considering that Mohenjo Daro, Kukkut arma, was built around 2500 BC, it is most likely that the people who built The City of Cocks have by that time already domesticated chickens???

Anyway, Iravatham Mahadevan also concludes that the city name, Kukkut arma, proves that people who built Mohenjo Daro spoke Dravidian languages.  This he says is because in today Dravidian languages like Naiki (Chanda) and Gondi the word for cockerel is gogodi, phonemically *kokoṭi, *kōkōṭi, *kukōṭi, *kokVṭi and finally *kokoṭ. You can find these words in "Pleonastic Compounding: An Ancient Dravidian Word Structure" by Periannan Chandrasekharan.

Iravatham Mahadevan then concludes that this word was then borrowed by the Arians who arrived to the Indus Valley after the cities were already abandoned and lying in ruins. They have learned the name of the city from the Dravidian speaking local population from whom they also borrowed the word for cockerel "kukkuTa" which we find in Sanskrit.

The word traveled east with the chickens. In Slavic languages, one of the words for cockerel is "Kokot" which comes from Proto-Slavic "*kokotъ" and is identical to Dravidian and Sanskrit words for cockerel. This word comes from the languages of the R1a people who dominated the Eurasian steppe during the Bronze Age, when the chickens started spreading from India towards Europe. Considering that these people controlled the main land trade route through Eurasia, connecting China, India, Europe, they probably were the people who brought chickens into Europe from India. These R1a people are one of the direct ancestors of the Slavs, so no wonder that we find the same name for cockerel in Slavic, Sanskrit and Dravidian languages.

Chickens finally appear in Europe in the 9th century BC when the words for chicken start appearing in other European languages.