According to a report in Seeker, published in August 2017, researchers led by Tobias Richter of the University of Copenhagen have excavated a Natufian culture site in Jordan known as Shubayqa 1, which was occupied between 12,600 and 10,000 BC. The early radiocarbon date for the site, obtained through accelerator mass spectrometry, suggests that Natufians lived across the region of the Levant earlier than had been previously thought, and adapted to a wide range of habitats. The site could also offer scientists information on the transition from hunting and gathering to farming. Richter said the people living at Shubayqa 1 domesticated dogs as early as 12,000 BC. They produced art in the form of carved bone and stone figures. They also buried their dead. “Some have argued that this is evidence for the presence of ritual specialists—shamans—or some kind of group leaders,” Richter said. “What seems clear is that the Natufians had developed a complex symbolic cosmology and treated their dead with respect.”

They also built one of the world’s earliest stone buildings, complete with a stone-paved floor. A stone-lined fire pit, and food remains from birds, gazelle, and tubers, vegetables, and wild cereals and legumes were also uncovered.

This is the building the article is talking about: 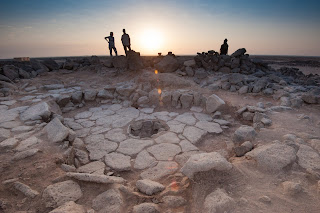 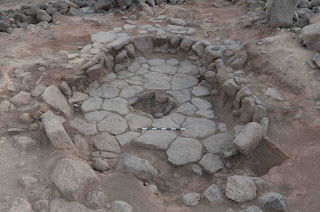 In the article "High Resolution AMS Dates from Shubayqa 1, northeast Jordan Reveal Complex Origins of Late Epipalaeolithic Natufian in the Levant" by Tobias Richter, Amaia Arranz-Otaegui, Lisa Yeomans & Elisabetta Boaretto, we can see the aerial view of Shubayqa 1 showing the main excavation area A/B and location of Shubayqa 1 (insert bottom left). And in the centre we can see the above house with the paved floor and the stone lined hearth, which is clearly trapezoid in its shape. 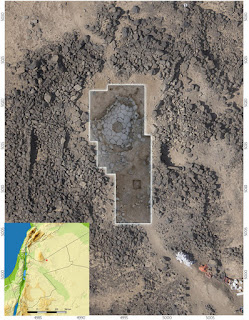 This is very very interesting. Because there is another site, in Serbia, full of trapezoid houses with paved floors and central lined hearth.

Lepenski Vir, located in Serbia, is an important archaeological site of the Mesolithic Iron Gates culture of the Balkans. The latest radiocarbon and AMS data suggests that the chronology of Lepenski Vir is compressed between 9500/7200-6000 BC. The late Lepenski Vir (6300-6000 BC) architectural development was the development of the Trapezoidal buildings and monumental sculpture...

The houses are completely standardized in design, and have a very distinct shape, built according to a complicated geometric pattern. 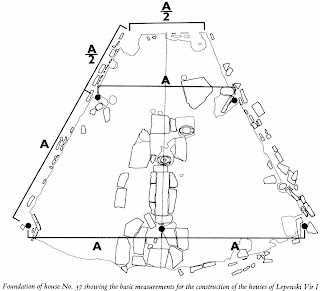 They however greatly vary in size. The smallest of the houses have an area of 1.5 m2 (16 sq ft) while the largest one covers 30 m2 (320 sq ft). Here are these trapezoidal buildings in situ. 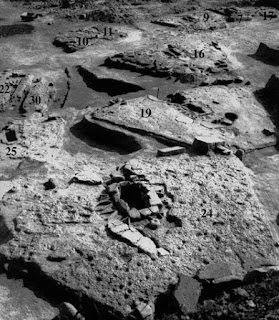 In Lepenski Vir, it appears that there was a process of gradual desacralization, which means that the shrines turned into the houses in time.

The basis of each of the houses is a circle segment of exactly 60 degrees, constructed in the manner of an equilateral triangle. The tip of the trapezoid base, a shape previously unknown in human settlements, is pointed into the direction of the prevailing wind (košava).  The material used for the floors is the local limestone clay, which, when mixed with the animal dung and ash, hardens like a concrete. Because of that, the floors are almost in perfect condition. On the edges of the floors there are remnants of the stone reinforcements which served as the carriers of the upper constructions, which means the houses were covered. The covering material was some easily degradable material or was similar to the surrounding loess, so it couldn't be distinguished from it during the excavations.

According to the archaeologists who worked on the site, the planned design of the settlement, its functionality and proportional forms, shows the almost modern sense of architecture. Despite a major age distance between then and now, the architectural plan of the settlement seems so contemporary and recognizable today.

The shape of the house base was, until I saw the above Natufian house, thought to be completely authentic and not recorded in any other locality.

Now what? Are these two cultures connected?

Let's see what we have:

Natufians founded Jericho which may be the oldest city in the world. People of the PPNA culture which succeeds the Natufian culture in Jericho, buried their dead under the floors of their houses. There are 279 burials, below floors, under household foundations, and in between walls found in the PPNA period layer in Jericho. During PPNB period, Skulls were often dug up and reburied, or mottled with clay and (presumably) displayed. 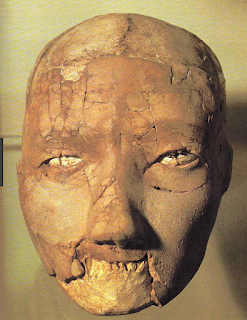 Lepenski vir people also buried their dead under the floors of their houses, sometimes with the head cut off. They also made many stone heads which were displayed in the settlements. 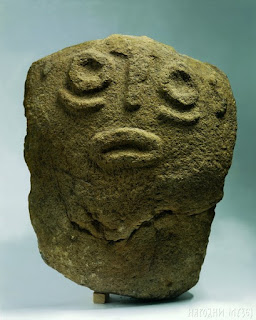 Is this all just a coincidence? The cultural traits I have just described are so unique, and dates of the late Natufian culture and the early Lepenski vir culture are so close, that I believe that there is a distinct possibility that there is a link between these two cultures.

What do you think?
Posted by oldeuropeanculture at 10:49